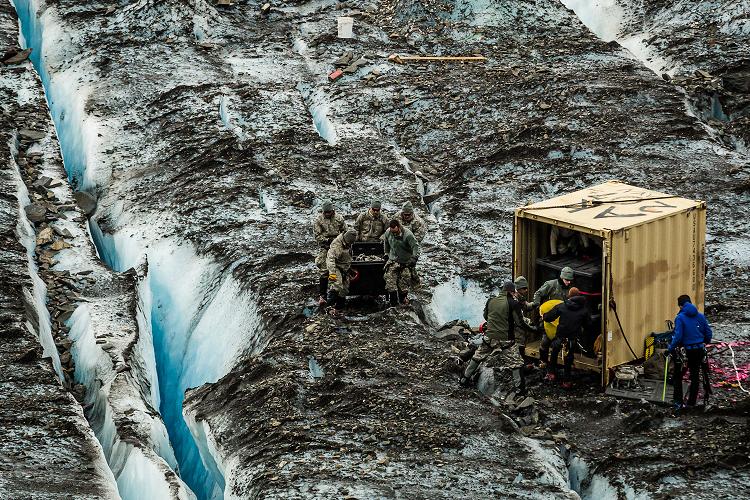 It’s easy to see how somebody could get lost in the craggy crevasses of Alaska’s Knik and Colony glaciers, located about 50 miles east of Anchorage, the state’s largest city.

It’s even surprisingly easy to see how the shifting plates of ice and earth could slowly, over the course of 70 years, digest a huge military plane.

That’s exactly what happened in 1952, when an Air Force C-124 cargo plane crashed into Mount Gannett, rising up out of the glacial plain.

All 52 souls aboard perished in the accident.

Searchers located the crash site some days after the event, but it wasn’t long before the wreckage was swallowed up by the movement of the glacier, grinding and grumbling against itself, shifting and shape changing.

The terrain of Knik Glacier and surrounds is full of those crevasses, some only a few feet deep, others so deep you can’t see the bottom. Some are just wide enough for a human body to squeeze in; some you could drop a dump truck into. There are some areas that look flatter than others, but then the trenches begin again, like giant claw marks scratched into earth.

It’s within this terrain that crews from Joint Base Elmendorf-Richardson and Fort Wainwright have been working to recover debris from that 1952 crash. After seven decades, the glacier saw fit to spit out some of the wreckage from that historic wreck, and in June, it was spotted by an Alaska Army National Guard helicopter on a routine training mission.

Some of it has already been lost to the waters of nearby Lake George. In the 70 years that have passed since plane crash and plane crash discovery, the wreckage had migrated 14 miles from the crash site. And the debris is still moving, about 3 feet per day, according to Chief Warrant Officer Bryan Keese.

After the initial sighting of the wreck in June, the Joint POW/MIA Accounting Command (JPAC) sent a team of five investigators to Alaska to visit the wreckage. It wasn’t long before some of the evidence recovered at the crash site hinted that it was from the 1952 wreck. JPAC returned to headquarters in Hawaii shortly after, transporting human remains found on the glacier in hopes of matching them to the crewmen aboard the C-124 when it went down.

That left crews from JBER to continue recovery efforts, if they wished, and that’s what they’ve done in the meantime, hauling debris from the glacier with the help of Army National Guard helicopter crews.
On the ground are between 10 and 15 other recovery crew members, including mortuary affairs specialists and members of the Northern Warfare Training Center, who are helping the other team members navigate the treacherous ice of the glacier.

Human remains to be identified

So since the wreck has been identified, what’s the point of the ongoing recovery? According to Lt. Col. Chris Nall, some of the debris may be worthy of placement in museums, and the search has turned up more than plane debris.

“We did find what we believe to be human remains yesterday and the day before,” Nall said Thursday. The mortuary specialists will work to identify the remains, including whether they belong to human or animal; depending on the results, they may be sent to JPAC for cross-reference, Nall said.

And yet the glacier continues its constant movement, swallowing some wreckage one day, regurgitating other pieces the next. Recovery efforts largely depend “on what that glacier is willing to give up,” Nall said.

Really, the continuing recovery efforts offer a final tribute to the men who lost their lives aboard the aircraft 70 years ago. Surviving family members have been left to wonder for more than a half century what happened to their loved ones.

Recovery provides closure, Keese said, adding, “we just want to get those pieces off the glacier.”

485 ♥ Inuit gov. in Atlantic Canada calls for people to stop travel to and from their region

355 ♥ Is Norway's farmed salmon as healthy as we think?