Polar bears diverged into a separate species between four and five million years ago, but interbred with their brown bear cousins and declined in population in response to climate warming over the millennia, according to a new exhaustive study that included many animals from Alaska.

The findings — based on what may be the most extensive DNA analysis to date of the iconic Arctic predators — suggest a much earlier origin for the species than some other recent studies.

The research also found that polar bears occur in much smaller numbers today than during past ice ages.

Still, it means that polar bears managed to persist as a species through multiple warm episodes — with a little grizzly co-mingling along the fringes of their range — and then rebound when the climate again grew colder, said lead author Charlotte Lindqvist, an assistant professor of biology at the University of Buffalo.

“This is the first time we can see, from their genes, how the population history of polar bears tracked Earth’s climate history,” she said in a Penn State story that accompanied the research. “We see an increase in polar bears at the end of the Early Pleistocene as the Earth became much colder, and a continuous decline in the size of the population during warmer times.”

“Maybe we’re seeing a hint that in really warm times, polar bears changed their life-style and came into contact, and indeed interbred, with brown bears,” added co-lead author Stephan Schuster, a professor of biochemistry and molecular biology at Penn State, and a research scientist at Nanyang Technological University in Singapore.

But this long history of adaptation and some hybridization doesn’t guarantee the ice-dependent species will be able to survive modern climate change — with shrinkage of summer sea ice, unprecedented conflicts with humans and accumulation of industrial poisons in their bodies.

“They have indeed lost a lot of their past genetic diversity, and because of this, they are very likely more sensitive to climate change threats today,” Lindqvist said.

The new genetic workup is the latest development in a quest to use sophisticated genetic analysis to sort out the prehistory and origins of polar bears, an urgent task given the accelerating impact of climate change and human conflict on some populations around the Arctic.

The shrinkage of sea ice during summer — along with other consequences of Far North climate shifts such as rising air temperatures, thawing permafrost, sea level rise, vegetation shifts, increasing rainfall — can be devastating to animals completely adapted to hunt, mate, raise offspring, den and migrate in a frozen world. When ice habitat shrinks back or disappears, polar bears must travel further and work harder to find food and denning sites. Bears are forced to spend more time on land, where they compete and sometimes interbred with brown bears.

The fear that U.S.-managed populations could eventually go extinct due to ice loss led the United States to list the bears as threatened and designate 187,000 square miles of North Slope and Arctic Ocean as habitat critical to their survival. The designation is now embroiled in court challenges.

The newest analysis — to be published this week in the early edition of the “Proceedings of the National Academy of Sciences” — drew on the work of 26 scientists from 13 institutions in North America, Europe and Asia. Among them was biologist Sean Farley, a long-time bear researcher based in Anchorage with the Alaska Department of Fish and Game. 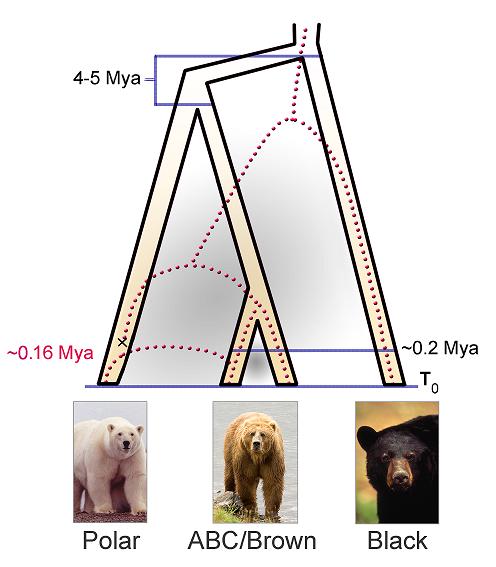 The authors collectively sequenced the nuclear genomes of 28 different bears, including at least eight animals from Alaska. (One brown bear came from the Kenai Peninsula, while two brown bears were sampled from Alaska’s Alexander Archipelago, known as the ABC brown bears. Five of the polar bears were natives of Alaska’s Chukchi and Beaufort seas. Many other samples came from polar bears near Svalbard.)

Their work produced a “deep sequence” of the entire genomes of a polar bear, three brown bears and a black bear. They also examined DNA from 23 additional polar bears, among them the remains from a predator that prowled the Far North about 120,000 years ago.

“Using this vast amount of data, the scientists discovered that polar bears are actually an older species than previously thought — indeed, far more ancient than suggested by a recent study that placed the species’ age at 600,000 years old. That analysis looked only at small segments of DNA.

“‘We showed, based on a consideration of the entire DNA sequence, that earlier inferences were entirely misleading,” said study co-lead author Webb Miller, a Penn State professor of biology and computer science and engineering. “Rather than polar bears splitting from brown bears a few hundred thousand years ago, we estimate that the split occurred 4-5 million years ago.'”

Among the new insights uncovered by the study: Southeast Alaska’s so-called “ABC bears” have been mixing it up with polar bears over the eons, swapping more genetic material than previously thought.

“The ABC brown bears’ mitochondrial sequences are much more like polar bears’ than like other brown bears’,” Miller said in the Penn State story. “This made us wonder what other parts of their genomes are ‘polar-bear-like’. We mapped such regions, which constitute 5 to 10 percent of their total DNA, onto the genomes of two ABC brown bears. As such, brown/polar bear hybridization, which has been observed recently in Arctic Canada, has undoubtedly contributed to shaping the modern polar bear’s evolutionary story.”

“Although our results clearly demonstrate that American black bears, brown bears, and PBs have had largely independent evolutionary histories over millions of years,” the authors wrote in their conclusion, “we also show that gene flow between bear species, possibly as a result of shifts in distribution of formerly isolated populations, has occurred during their evolutionary history.”