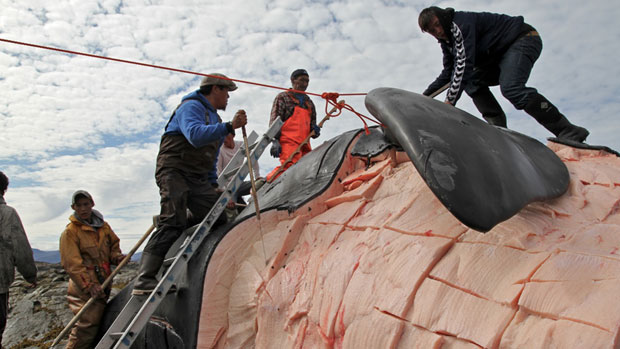 Hunters will have to cross Boothia Peninsula to find whales

People in Taloyoak, a community in Canada’s eastern Arctic  territory of Nunavut, will be going out to hunt a bowhead whale this summer for the first time in living memory.

Each summer, three Nunavut communities are given the chance to hunt a bowhead. Besides Taloyoak, Arctic Bay and Repulse Bay will also be organizing hunts this year.

The hunt is generating a lot of excitement in Taloyoak, a predominatly Inuit community of approximately 899 people, but  hunt organizers still have some hurdles to overcome.

“We are trying to raise some money from various organization, because we cannot hunt whales in our bay, as there aren’t any, so we have to travel to the Gulf of Boothia where the bowhead whales are,” said Abel Aqqaq.

The 35-kilometre journey from Taloyoak across the Boothia Peninsula is expected to take at least a couple of days.

A hunt captain has been selected and he’s the only person in the community with any experience in hunting a bowhead.

The date to start the hunt hasn’t yet been set, but organizers hope to get out while the days are still long.

Long a staple of Inuit culture, the Eastern Arctic bowhead became severely depleted by centuries of commercial whaling, starting in the 1500s. They first came under legal protection in the 1930s.

In 2009, its listing was downgraded from a threatened species to a species of special concern, the least serious designation under the federal Species at Risk Act.