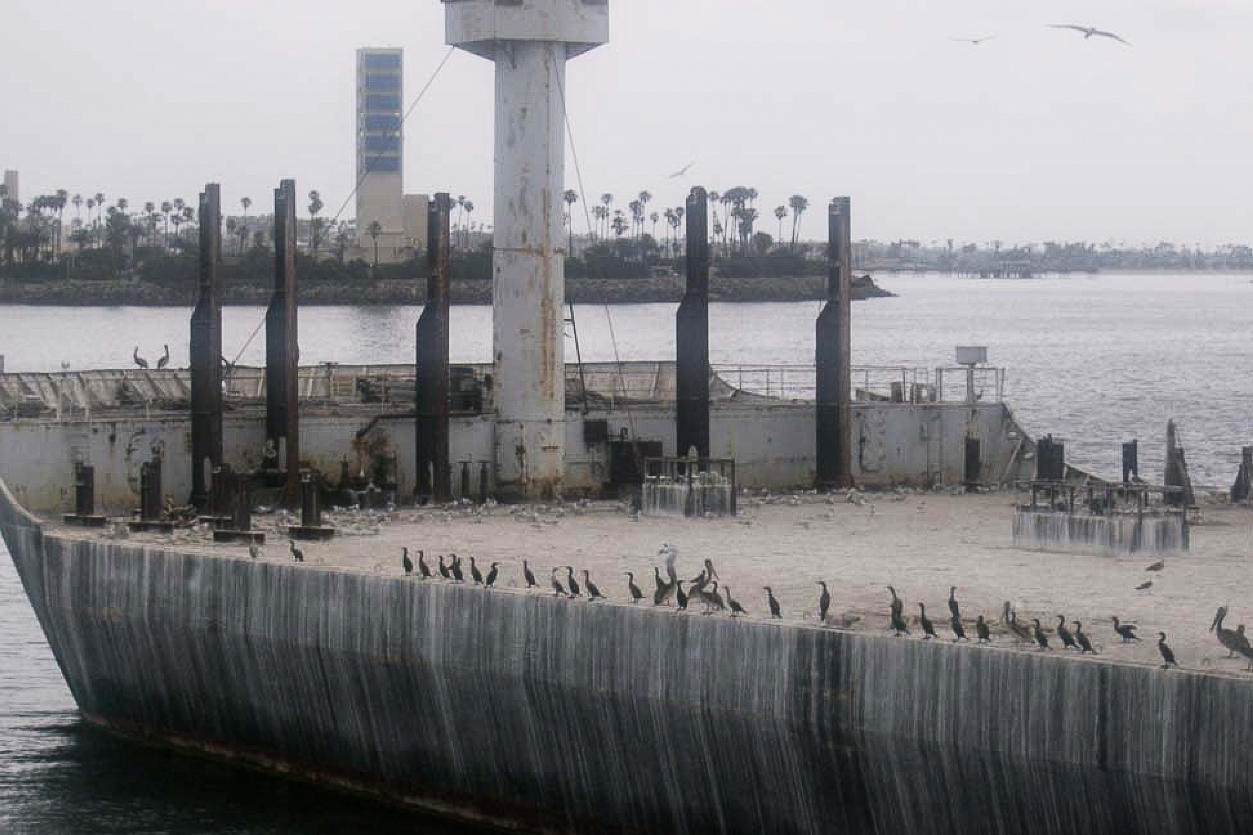 Royal Dutch Shell’s quest to open the U.S. Arctic Ocean to oil drilling, an undertaking that’s involved years of preparation and cost more than $4.5 billion, hinges on an old icebreaking barge that sat idle so long it literally went to the birds.

The Arctic Challenger, the troubled centerpiece of Shell’s oil-spill response plan, features a remarkable past — once glorious and, well, not so glorious.

At one point, hundreds of Caspian terns, gulls, cormorants, pelicans, ravens, crows and even an owl turned the 300-foot barge into a giant’s bird nest, coating the deck with bird dung and other gunk.

That was in California’s Long Beach Harbor in 2007, where the downtrodden vessel became a bit of a media celebrity as wildlife regulators raced to save the protected terns and their chicks.

That avian invasion was an ignoble downturn to a celebrated career that began in 1976, when the Arctic Challenger hammered through sea ice off the shores of Alaska and paved the way for the development of the nation’s largest oil field.

Today, after months of renovation, the 300-foot barge has been transformed as shipbuilders prepare it for a return trip to the Arctic Ocean — part of Shell’s contingency if its oil drilling operations result in a spill at or near the wellhead. But the Arctic Challenger’s renovation is well behind schedule, throwing into question the company’s plans to begin drilling during an already short summer season in the Arctic.

Shell, Europe’s largest oil company, has started moving key ships to the Arctic in preparation. But under current federal rules, it can’t drill until the Arctic Challenger is on site and ready to respond. Ultimately, Shell’s plans call for the Challenger to wait at the ready off the coast near Barrow, a small Iñupiat Eskimo town between the company’s proposed drilling sites.

But first, the shipyard work must come to an end. Among other things, the U.S. Coast Guard must also review and approve dozens of items related to the ship’s mooring, structural, electrical and fire-safety capabilities.

Also, the Bureau of Safety and Environmental Enforcement must approve the containment dome that Shell has designed to lower over a gushing pipe or well, with hoses that direct natural gas and oiled water to the surface, where separation equipment will allow the gas to be flared off and the oil to be safely collected (check out an animation of the containment dome here).

Superior Energy Services of Houston has leased the Arctic Challenger from owner Crowley Maritime. Superior, in charge of the overhaul and installation of the containment dome, has spent months cleaning up and modernizing the barge.

Shell has voluntarily made the containment dome part of its spill-response plan in the Arctic following BP’s disastrous Deepwater Horizon explosion and spill in 2010, said Shell spokesman Curtis Smith. Ensuring that the containment system and other aspects of the Challenger operate flawlessly has contributed to the delay, Smith said.

U.S. Interior Secretary Ken Salazar, speaking at an Anchorage press conference Monday, blamed Shell for the hold-up. He said the company should know somewhere around Aug. 23 whether the barge would be certified by the Coast Guard in time for drilling. When the containment dome has passed tests, Salazar can decide whether to issue individual well permits or not.

The media has zeroed in on the slow progress. Everyone from Alaska blogger Phil Munger, who said he was on a tug that once helped tow the Challenger, to the nation’s largest papers are asking questions. The Los Angeles Times recently zeroed in on a minor fine stemming from small discharges into the water during the vessel’s retrofit at the shipyard in Bellingham.

“It’s not a project we can rush, and since it’s a first of its kind vessel, there are always going to be delays related to construction,” Smith said in an email to Alaska Dispatch. “Unfortunately, these delays are impacting our drilling season. But make no mistake this vessel is rock solid and capable.”

In an email, Smith refused to answer why Shell chose this particular vessel to play such a pivotal role. But a review of the Arctic Challenger reveals a colorful history, from its glory days in Alaska’s Arctic to idle times at dock, with birds calling the barge home.

The Florida-based shipping company had begun hauling supplies to the Prudhoe Bay oil field in 1968, just as petroleum geologists were confirming the prospect held billions of barrels of oil. The activity across the North Slope continued at a fast clip into the 1970s. But in summer 1975, with 67 barges trying to carry cargo to the oil fields, shippers ran into a problem: the ice never left the coast.

As a result, Crowley had the icebreaking Arctic Challenger built to expand its shipping window, said Bruce Harland, an Anchorage-based vice president with Crowley.

Today, sea ice is also making life challenging for Crowley shipments this summer — not to mention for Shell’s drilling plans — because it hasn’t blown far off the state’s northern coast. But it’s nothing like it was in 1975, a year that required ice roads across the tundra so that supplies could be hauled over the mainland by truck to Prudhoe Bay, rather than by barges and other vessels, Harland said.

“That was the single toughest ice year we’ve ever had,” said Harland. “We have a pretty good track record of when ice goes in or out, and nothing like that has happened before or since.”

After the Arctic Challenger began operation in 1976, pushed by two of the era’s most powerful tugs, its primary mission was smashing through ice to open up sea lanes for other vessels hauling modules to build up oilfield facilities at Prudhoe Bay. It also helped supply other Alaska towns and villages not connected to the state’s road system.

In fact, the Russian tanker Renda, which made international news this past January, wasn’t the first ship to plow through ice to help the city of Nome. The Arctic Challenger set a record in spring 1977 when it was used to make the earliest delivery of supplies ever to the historic town along the Bering Sea, Harland said.

As oil production at Prudhoe Bay began to wane, Crowley’s sealifts to the North Slope began to slow. By the late 1990s, Crowley was no longer using the vessel. It sat unused for years, Harland said. At some point it ended up in California.

In 2003, Crowley sold it to Sause Bros., an ocean shipping company based in Coos Bay, Ore.

Crowley included a buy-back option in the sale if the Arctic Challenger wasn’t modified, said Dick Lauer, a vice president with Sause. Sause had intended to upgrade the vessel to a cargo container barge, but the nation’s economy hit the skids, slowing the shipping business. Also Sause decided to invest in barges with more modern, fuel-efficient hull designs, so it didn’t revamp the Arctic Challenger, Lauer said.

Sause owned the vessel in 2007, when the barge was anchored in California’s Long Beach Harbor, near Los Angeles.

In 2007, the Arctic Challenger made headlines in The Los Angeles Times after a tour boat captain called for help rescuing a baby seabird that had apparently tumbled off the vessel and was drowning.

Tourists applauded as lifeguards rescued the baby tern, the paper reported. On the idle vessel were some 350 Caspian terns.

“Back on the barge, a raucous colony of Caspian terns had transformed mounds of coiled rope into shady camouflage for pale yellow hatchlings,” reported The LA Times. “Adult terns swooped in every few minutes with tiny silver fish in their beaks and promptly fed newly hatched birds. Others chased intruding brown pelicans, double-crested cormorants and Heermann’s gulls away from their nests on the flat deck.”

Sause Bros., which had hoped to relocate the Challenger to its shipyard in Coos Bay for the upgrades, agreed not to move it until the terns had migrated away. State wildlife officials in California, concerned that the nesting terns lacked appropriate habitat in the congested harbor, also swung into action to protect them.

A California Fish and Game report recommended weekly observations by wildlife officials from a safe distance and that private boats and fireworks be kept well away from the barge.
Where the heaviest nesting occurred, portions of the deck were crusted with “dirt, sand, crushed seashells, and avian excrement” that was “approximately three-quarters to one inch thick,” said the report.

Wildlife officers observed scores of other birds roosting on the deck, the report said. Nearly half the baby terns had fallen off the deck and needed rescuing by Long Beach lifeguards. They were transported to a bird rescue center or animal hospital for rehabilitation.

In 2009, Sause sold the Arctic Challenger back to Crowley, which eventually leased it to Superior — the firm that’s renovating the barge for Shell.

Harland, the Anchorage-based vice president with Crowley, said he didn’t know what modifications Superior is making to the vessel, but it had a very capable life as an icebreaker when his company operated it.

“It’s just been a dependable piece of equipment,” he said.

As far as Harland knows, the ship’s return to the Arctic as part of Shell’s oil drilling operations would be its first duty since the late 1990s. And he expects the Challenger’s reliability to continue with its second life in the Arctic.