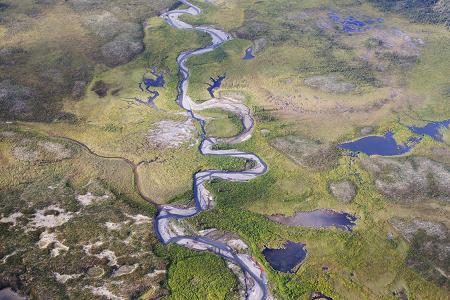 The North is more than just a military base and a place to extract oil and gas resources, said the Union of Northern Workers and the Public Service Alliance of Canada in an open letter to Canada’s Prime Minister Stephen Harper..

Stephen Harper is currently in the North for his annual summer tour.

The letter declared the Prime Minister has let northerners down.

“Other than lip service, you have done nothing to address the scandalous cost of food in the far North, the terrible social inequalities that exist due to crushing poverty, the continued lack of quality public, not-for-profit health care services and much more.”

The sentiments are echoed around the North.

Harry Maksagak is an Inuit elder who lives in the community of Cambridge Bay in Canada’s eastern Arctic Nunavut territory — a community the Prime Minister is scheduled to visit Wednesday.

He said he was “quite tickled” to hear that Harper would be stopping by the hamlet.

“Any time that an official or dignitary and in this case the leader of the current government in power takes the time to consider visiting the smaller communities … I think it’s beginning to show us locals that we’re not just up in the North here by ourselves,” he said.

But Maksagak added that he’s disappointed the visit will likely only be a quick stop.

“I don’t think that he’s going to actually open the opportunity for people like myself or those who have heartfelt concerns to voice with him … I think he just wants to do in a stop, make an announcement, enjoy a bit of a festive evening, and then carry on into the next stop.”

Maksagak said the most important thing for the 26 communities in Nunavut is for the people to have adequate housing, food and jobs.

Senator takes exception to being shut out of park announcement

The Prime Minister is expected to make an announcement about a new park in Canada’s Northwest Territories Wednesday.

Northwest Territories Senator Nick Sibbeston says he wanted to be there and even asked for an invitation.

“I am the senator for the Northwest Territories, I should be there, I should be invited, but the Prime Minister’s office has not had the courtesy of inviting me at all, and I think that’s really rude of them. I think that’s not the way people treat each other in the North,” he said.

Sibbeston said northerners need jobs and business which resource development brings — not more parks, which he said can limit development.