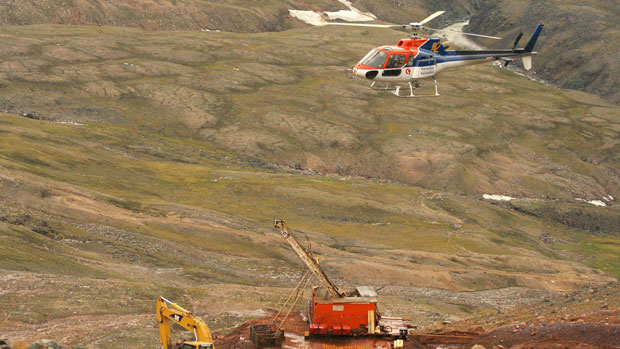 Baffinland proposal would create largest industrial project ever in the North

A massive open-pit iron mine proposed on northern Baffin Island in Canada’s eastern Arctic territory of Nunavut would be the Canadian North’s largest industrial development to date, but residents are divided over what it would mean for the territory.

The Mary River mine, proposed by Baffinland Iron Mines Corporation, would be located about 160 kilometres south of the community of Pond Inlet. The 17,000-hectare mine will cost about $4 billion to build.

Plans call for a 150-kilometre railway to transport ore from the mine to a port to be built at Steensby Inlet.

From there, nine icebreaking freighters weighing at 190,000 tonnes each would run year-round.

About every two days, one loaded freighter would carry the ore through Arctic waters to Europe.

Some people in Nunavut welcome the potential wealth they could gain from the mine. Others, however, are wary about its potential impacts.

Zacharias Kunuk, director of Atarnarjuat: The Fast Runner, said his family used to live in the area where the port would be built.

Kunuk, who is based in the Nunavut community of Igloolik, is concerned about the mine’s potential impact on wildlife in the area.

“I remember seeing the caribou go by in the spring, and then returning the other way in the fall,” he said in Inuktitut.

In the past, Inuit weren’t given a choice in decisions like economic developments, he said. But times have changed.

“Equality is now a part of this process, and so we want our human rights acknowledged and accommodated,” he said.

Kunuk has hired a human rights lawyer to keep a close eye on the project.

Baffinland says the project, if approved by regulators, will benefit Inuit who live in the region. For one, the company will need about 3,000 people to build the mine and 950 people to run it. The mine will not only be a potential source for employment, but also a huge financial boon.

Nunavut Tunngavik Inc. (NTI), Nunavut’s land claims organization, and the Qikiqtani Inuit Association (QIA), a regional organization under Nunavut Tunngavik, which represents the Inuit of Baffin Island, stand to earn billions in royalties if the project goes ahead. But they’re also supposed to represent Inuit, and advocate for the culture and health of Nunavummiut. The QIA is negotiating an Inuit Impact and Benefits Agreement with Baffinland.

QIA president Okalik Eegeesiak said they are close to finalizing the agreement, which covers everything from employment and social programs to business targets.

This past summer saw final public hearings for the mine held in Nunavut. In her closing statement, Eegeesiak said the Mary River project is the right step to take for Inuit.

“Although Inuit did not invite this development proposal, this project represents a transition from being a passive to an active participant in the development of our own resources,” she said.

Tom Hoefer, president of the NWT and Nunavut Chamber of Mines, said one of the most interesting aspects of the project is that royalties will go directly to the Inuit, instead of the territorial government.

“The Inuit, when they negotiated their land claim, were very strategic in selecting subsurface resources that they thought could become a mine one day,” he said. “So they did that on purpose because they wanted to think about future economic development. And so this mine on Baffin Island that’s being proposed is going to mine actual Inuit-owned minerals.”

At the only currently operating mine in Nunavut — Agnico-Eagle’s Meadowbank gold mine near Baker Lake — about 40 per cent of the staff is Inuit. NTI just received $2.2 million in royalties from that mine.

Hoefer said if Baffinland can reach the same kind of numbers of Inuit workers as Meadowbank, then it could be a huge opportunity for people who live in nearby communities.

“And the baby boom in Nunavut is creating a huge growth in young people today… and so mining really provides a great opportunity because people can still live in their communities and they can fly out to work,” said Hoefer.

But some say that with more money comes more trouble in the territory.

Hilton Smee, superintendent for the Nunavut RCMP, said more money can often mean more crime and dysfunction in a community. Smee said the RCMP saw this happen in Baker Lake with the Meadowbank mine.

He said his force will have to be prepared if the mine goes through.

“With increased economic activity, we recognize that there will be social concerns and some issues that, oftentimes, we are the organization that has to deal with it, right at the very first instance,” said Smee.

The RCMP is now doing research into what kind of policing needs will be required if the mine goes through.

Officials with the Government of Nunavut have also raised concerns that the mine will put more pressure on health and social services, as the nearby communities are likely to grow because of the mine.

Even Iqaluit Mayor Madeleine Redfern has expressed concern that Iqaluit will feel the impact of the mine, even though the capital city is located about 1,000 kilometres away.

Redfern said people with money tend to migrate to larger centres, which could put a strain on Iqaluit.

“The City of Iqaluit is already struggling to meet the growth and demands from 300 new residents every year,” she said. “This will add to that migration.”

Redfern also worries about social problems that might follow when money begins to flow in some of the smaller communities.

“We are the only community that has the hospital, the only community with the courthouse, [the Baffin Correctional Centre], the women’s and youth offender facility, men’s shelter, women’s shelters, and so if there are negative social impacts in those communities, we’ll feel those pressures here. So it will impact our community.”

Though the Government of Nunavut supports the proposed mine, it has voiced concerns to the Nunavut Impact Review Board about environmental impacts.

Baffinland says its project will have little or no impact on wildlife.

“It is the Government of Nunavut’s position that a determination of ‘no significant impact’ is not supported by the analysis,” said Peter Hale, manager of wildlife research for Nunavut’s Department of Environment.

The QIA has asked that mine construction be avoided during the caribou calving period and that a program be put in place to monitor caribou during railway construction.

The port at Steensby Inlet has been another bone of contention. The area is flush with wildlife and archeological sites, and has been used by Inuit for millennia.

The mayors of Igloolik and Hall Beach originally objected to the port in that location, but later said they would not oppose it if their communities were compensated. Baffinland says any compensation would have to come through the Inuit Impact and Benefits Agreement.

The Baffinland proposal has also attracted attention outside Nunavut.

The Makivik Corporation, which represents Inuit in Canada’s French-speaking province of Quebec, says there is a high risk of an oil spill in Hudson Strait because of increased ship traffic that would come with the mine.

Potential fuel spills are another worry.

Both the Government of Nunavut and QIA have concerns about the company’s plan to store fuel on a floating vessel near Steensby Inlet over the winter during the mine’s construction period.

Rob Eno, director of environmental protection at Nunavut’s Department of Environment, says he agrees with Baffinland that an oil spill from one of the freighters is unlikely, but if there were a spill, it would be basically impossible to clean up.

“We take the view that you have to do everything you can to prevent that happening in the first place, because once it gets under the ice it’s very difficult to recover, if at all,” Eno said.

In September, scientists announced that sea ice loss hit a record low in the Arctic this year, which could mean increased danger for industry.

“You wouldn’t think because you are reducing sea ice we’re actually increasing ice hazards, but we actually are because the glacial ice is now in the southern Beaufort Sea and is moving quickly,” said David Barber, the Canada Research Chair in Arctic System Science at the University of Manitoba.

Earlier this year, loose ice drifted into Frobisher Bay and Cumberland Sound in the Eastern Arctic. It slowed the annual sea-lift resupply and caused serious damage to one cargo vessel.

Review board decision expected this week

The Nunavut Impact Review Board is expected to make a decision about the mine Friday.

Levi Qaunaq, a walrus hunter in Igloolik, said for him, the development may mean he’ll have to travel farther to hunt.

“When the ships start, we might have to change our route and go way up and over instead,” he said. “That’s one of my only issues with it.

“I hope it helps us, you know, to buy gas and pay for everyday things. If we got some extra help to live, I would be fine with it.”