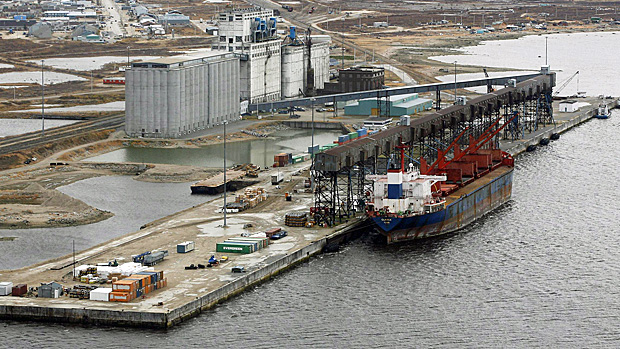 On an otherwise ordinary Monday in early August, a ship built in Asia, travelling from Europe and bound for Africa sidled up to the berths of the port in the northern town of Churchill, in the Canadian province of Manitoba, ready to be loaded with Canadian grain.

After filling the hull with Prairie wheat, the MV Puffin was off, bound for the Nigerian port of Lagos with 42,779 cubic metres of cargo.

The Puffin was the port’s first customer this shipping season. But if shifting global trade winds are any indication, a lot more vessels will follow in its wake.

When Sir John Franklin set out to find the elusive Northwest Passage in 1845, the voyage that is now the focus of a Parks Canada search was a dream that cost him and his crew their lives. Now, pursuit of that passage to cross between the Atlantic and Pacific oceans is seeing renewed interest as Arctic ice recedes to record lows.

That’s opening up shipping lanes for huge ships like the Puffin and others, which are always looking for cheaper and more efficient ways of hauling their freight from point A to B.

Cruise ships already made the crossing on scheduled routes, and countless adventure seekers have made the trip over the years. Regular tanker travel is the next frontier.

An American oil tanker, the SS Manhattan, became the first commercial vessel to make the crossing as long ago as 1961, an attempt to prove the trip was possible. A handful have followed over the years, including the MV Camilla Desgagnés in 2008.

Even at the best of times, the icy, stormy strip of water over top of Baffin Island, west through various chilly passages and into the Beaufort Sea on the West Coast is no pleasure cruise. It’s deep, wide and pirate-free, but multiple risks remain.

“Even if the sea ice has melted,” University of British Columbia Prof. Michael Byers says, “you might still be dealing with air that’s -10 or -20. When water sprays up, that water will freeze almost instantly when it hits the structure of the ship.”

“If enough of it sticks, ships can overturn,” he says. Attempting a crossing without the necessary precautions remains a risky proposition. 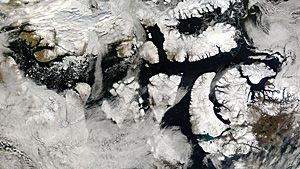 Despite the perils, the distances involved make the Northwest Passage enticing. A trip from Tokyo to London would be about 23,000 kilometres if a ship went via the Panama Canal. Going via the Mediterranean Sea and the Suez Canal shaves a bit off that, down to 21,000.

That same trip via the Northwest Passage would only be 16,000 clicks — a 7,000-kilometre shortcut. That’s two weeks of travel time, and potential money in the bank for any shipper that can pull it off.

“It’s not something we’re seeing a lot of yet, but we’re always on the lookout,” says Jeff McEachern, executive director of the Churchill Gateway, which runs the port on behalf of the federal government and OmniTrax, the U.S. freight company that bought the then-underused port in the 1990s.

Like the Puffin, much of Churchill’s business is bound for destinations in North America, South America, Mexico, Europe or North Africa. Historically a grain handler, the port is diversifying and handles a wider variety of goods every year, McEachern says.

“We primarily serve the Atlantic, not the Pacific,” he says. “But we always have our eye on that opportunity.”

“As shipping lanes open up, there’s always the potential,” he adds, noting Churchill is well-situated next to major centres because of the railroad that connects the port to the North American rail system, which OmniTrax also owns.

That’s a drop in the bucket compared to the goods that pass through the Suez and Panama canals — both of which rake in billions in fees annually. But it’s still a lot of cargo.

Clearly, the federal government has been flexing its muscles in Canada’s North of late. In recent years, Ottawa has spent billions on Arctic activities such as expanding the Rangers program, which provides surveillance and other military services. Although there’s no doubt a political advantage for appearing to be the stalwart defender of Canada’s North, there’s definitely an economic impetus at play. 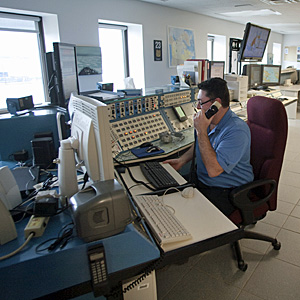 The economic potential is immense. In addition to creating a shortcut for ships just passing through, Canada is only starting to tap into the region’s natural resources.

The Quebec Liberals under Jean Charest made expanding mining activity on the coast of Ungava Bay a key plank of their failed re-election campaign. And TSX-listed Baffinland is planning to use special super carriers for 12-month-a-year shipping in its Mary River iron ore site in the Foxe Basin off Baffin Island.

An expanding global economy is going to lead to enhanced shipping. And Canada could be ideally situated to be a bigger player.

“The thing people need to realize is that it’s not like these shipping lanes are in competition with each other,” Byers notes. “They’re not.”

Shippers will always take the most economical route. A South Korean ship bound for Rotterdam is going to take the Northern Sea Route almost no matter what, and that same vessel bound for Brazil is likely going to travel via the Panama canal.

But as time goes on, a ship going from South Korea to New Jersey, for example, is going to view the Northwest Passage as a viable option. It behooves Canada to be ready for it, experts say.

Suez and Panama are major revenue generators for the two countries that have them, and even if the passage were to magically become ice free, it will simply never be on the same scale as they are. But that’s not to suggest there’s no benefit to Canada.

Russia already charges about $100,000 for having icebreakers and search and rescue pilots available for tankers that take the chilly Northern Sea Route along the country’s north coast.

“It’s never going to be a revenue generator on the scale of Suez or Panama but at the very least we could do so as a cost recoverer,” Byers says. He imagines the worst-case scenario of an unauthorized oil tanker travelling via the passage and having an accident. Canada’s maritime infrastructure is at present unprepared to handle such a calamity.

The Arctic Waters Pollution Prevention Act was written into law in 1972 and has a cap of $40 million for liability. That means in the eyes of current law, a company is only on the hook for $40 million worth of damages if there’s an accident.

The tens of billions of dollars in settlements that BP plans to pay out for its role in the Gulf Coast oil disaster are a lesson that 1970s-era assumptions about impact no longer work, Byers says. And ignoring that could do irreparable harm to Canada’s reputation.

“In major spills, even with all the fines for companies, the burden ultimately falls on the coastal state,” he said. “There are risks for not providing these services.”

Even beyond the downsides, there are those who doubt that Franklin’s dream will ever become a reality beyond the occasional ship here and there.

“Not a lot is likely to happen,” says Franklin Griffiths, a University of Toronto professor who has written extensively on Canadian sovereignty in the arctic.

Griffiths says the Northwest Passage will always maintain a bit of the lustre that drew adventurous explorers like Franklin in the first place. But even with Arctic ice dropping to its lowest level on record, he doubts the region is set to become a shipping superhighway any time soon.

“There’s probably going to be increased oil and gas activity,” he says, “but the shipping, such as it is now, is in Russian hands and likely to remain so.”

Any ship looking for a shortcut between Asia and Europe is more likely to go through the Bering Strait and stay north of Canadian waters.

“Even in the best case, the numbers don’t make sense for ships to go through the Northwest Passage for anything south of Boston,” Griffiths says.

“The economics might one day favour some of this, but not a lot.”