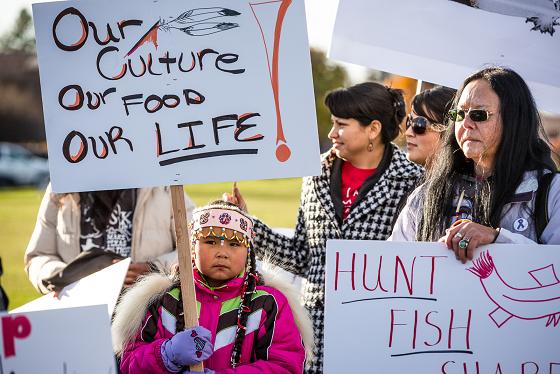 On a sunny, cool October afternoon in downtown Anchorage, nearly 200 Alaskans gathered on the city’s park strip to demand restoration of indigenous rights and freedoms — namely the ability to feed families by living off the land, unobstructed by rules and regulations that came after Outsiders showed up and took control of the Last Frontier.

“I’m here to fire you up,” said Lee Stephan, tribal council president of the Native Village of Eklutna, who was the first speaker at the rally. “We as Native people, we got to do something.”

He pointed out that when Natives managed their own resources, food shortages never occurred and salmon were abundant. Only under “white man’s” management have numbers dwindled and Natives lost opportunities to fish.

The crowd, which braved the chilly 35-degree weather in Alaska’s urban center, was itself a sea of political statements. Gatherers carried signs reading “Subsistence is life” and “Muktuk power,” a reference to a cut of whale skin and blubber. Other signs read “Got fish strips?” and “We are Alaska Native. We are Not Leaving” and “I am not a criminal.” Organizers handed out T-shirts with the slogan “I am Alaska Native / Hunt * Fish * Share.”

Stephan meant to deliver provocative words. Subsistence rights long have been a divisive issue in Alaska. Just this summer, when salmon fishing was reduced on the Yukon and Kuskokwim rivers due to a shortage of king salmon, dozens of fisherman who defied the closures found themselves slapped with tickets. Others had their nets and catch seized. Some nets were cut.

The so-called “fish in” was viewed as a political statement of Alaska Native sovereignty. But the law didn’t care: The fisherman were violating state rules, and 33 citations were written, 21 nets and 1,100 pounds of salmon were seized. In Alaska, all residents are expected to live under the same laws of the land.

“When they cut our fishing net, that’s really our lifeline that they are cutting,” Princess Lucha, the event’s emcee, told the crowd. Fisherman aren’t out fishing for themselves, she said — they’re fishing for family members and often entire communities. What hurts one fisherman, hurts a community.

The rally was a precursor to what is expected to be a hot topic at this year’s Alaska Federation of Natives convention, which opens Thursday at Anchorage’s Dena’ina Convention Center. The largest gathering of Native people in the United States, AFN can be a powerful vehicle by which Alaska Natives articulate their needs and command the attention of state and federal politicians.

Alaska Natives at Wednesday’s rally were pushing for a constitutional amendment, better co-management practices, and an end to what they characterize as the criminalization of traditional and customary practices.

“We as people understand our voice through the voting system,” said Liz Medicine Crow, president of the First Alaskans Institute and a speaker and Wednesday’s rally.

Political relationships, protected minority status, tribal governance and strong non-profit Native entities provide formidable platforms. Through these coalitions, there are “legions of people who know that it is wrong at their core to stop people from being who they are,” Medicine Crow said. “You don’t make laws that tell people it is not right to be themselves.”

To Medicine Crow, such practices in Alaska and the United States are no less than outright oppression. And, if they were happening in a foreign country, she believes it would be akin to genocide, pointing to Alaska Natives’ high rates of death, suicide, cancer, diabetes and other illnesses.

The fix, according to rally participants, is to restore to Alaska Natives their indigenous rights, and recognize their equality as stewards of natural resources and government leaders. Many, including Medicine Crow, believe Native control over fish and wildlife will yield better results, but their perspective is more holistic.

“These are not resources to use. These are our relatives to care for,” she said, referring to the symbiosis between ecosystem health and the health of generations of people that rely on it.

Demands for a better way of managing access to fish and wildlife are not new in Alaska. For more than two decades, the issue has been a thorn in the side of politicians who tried, and failed, to arrive at a fix. Under the Alaska Native Settlement Claims Act, Native hunting and fishing rights in Alaska were extinguished.

But under the Alaska National Interest Lands Conservation Act (ANILCA), a rural preference for such rights was enacted, which in theory should have helped Alaska Natives. But Alaska’s constitution, which affords equal access to resources by all Alaskans, would prove to be an insurmountable obstacle.

Years of state legislation attempting to acknowledge rural preferences would be undone by repeated court challenges. And attempts to amend the state’s constitution to align with ANILCA would fail, too.

Because of this, the federal government has maintained control of hunting and fishing rights on federal lands and waters in Alaska for more than two decades. This intervention, meant as a temporary fix, has turned into a longstanding practice that may be difficult to dislodge.

So now, some areas of the state fall under federal control where rural — and by extension, Alaska Native — hunters have preference. Other areas in state control operate under a system that acknowledges the substance rights of all Alaskans.

Alaska Natives want to hunt moose and caribou and geese and fish for salmon without fear of what they consider incongruent or inconsistent law enforcement action. When their families are hungry, they want to be free to feed them.

Former AFN president Byron Mallott has in his lifetime witnessed the evolution and stagnation of the efforts. In the 1990s, he was a member of a state commission assembled under then-governor Tony Knowles to address subsistence and other matters of importance to rural Alaskans. Back then, despite repeated attempts, including three special sessions of the Alaska Legislature devoted to the topic, the governor’s proposal for a subsistence fix and constitutional amendment never made it beyond committee bickering.

On the one hand, Mallott sees the tension in subsistence management as a state’s rights issue. On other matters, the state of Alaska has zealously reared its head in opposition to federal overreach. Yet here, when it comes to hunting and fishing rights of the state’s first people, it has for decades seemed content to remain idle.

On the other hand, Mallot believes the federal government may offer greater hope of a respectful and functional tribal relationship with Alaska Natives.

“I’m not sure that I want the state to manage subsistence,” he said.

Instead of focusing on the rights of rural inhabitants, Mallot said, “it’s time for us to talk about Native subsistence and aboriginal people’s subsistence rights. It’s what we worked so hard for during ANILCA in the first place.”

Some supporters at the rally carried signs suggesting a constitutional amendment be considered that specifically grants Native subsistence rights.

Speakers and supporters were clear about their plan of attack. They’ve had enough of feeling like they’re the first ones denied access when resources are short, and they’re prepared to relentlessly express their views to state and federal politicians.

“Hunting and fishing is a God-given and spiritual right that cannot be denied. It is not negotiable,” said speaker Randy Mayo of Stevens Village.

“We will not go silently into the night. No. We will fight and fight until these children are afforded the same God-given right.”