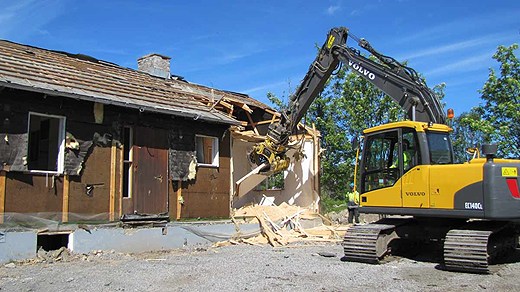 The Swedish state mining company LKAB is under fire in northern Sweden for not compensating local residents in Malmberget, an Arctic town of approximately 5500 people, whose houses are being eroded by mining operations.

“The worst is when the quakes come in the night – then you just jump out of bed. It feels like the whole house is coming down,” Kurt Hansson, one of those affected, told Swedish Radio’s Kaliber program.

“We’re like prisoners in our own homes – we can’t sell them. They should move the whole town.”

Hansen and about 5,000 other residents of Malmberget, near Gällivare, will have to wait for 20 years before the mining company is prepare to move them, under the current agreement with the local authority.

However now the county board is demanding the immediate evacuation of all residents who live withing a 500 metre radius of the mine.

“We need to resolve this without delay and see to it that people are not subjected to this kind of treatment,” said the county’s mining expert David Berggård.

The environmental court is expected to rule shortly on the county’s demand.

“Both the local authority and LKAB must have the capacity to handle this, and to plan new housing areas,” said LKABs spokesman Anders Lindberg.