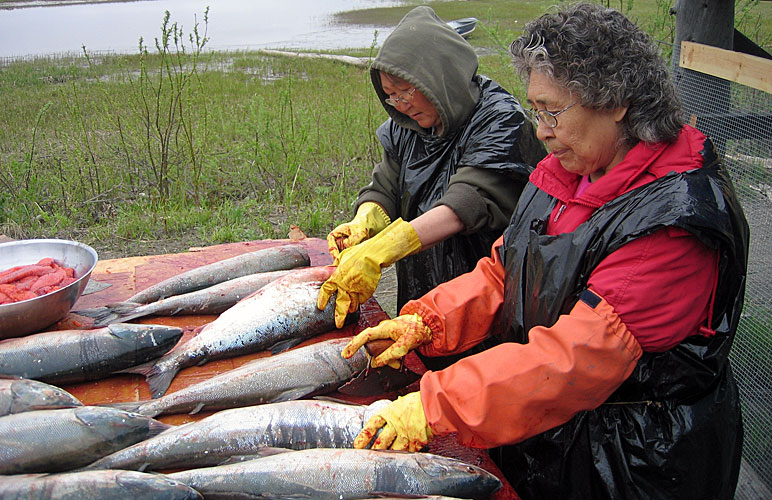 Trials scheduled to begin this week for 11 Alaska Native salmon fishermen are now delayed until the court and the attorneys handling the case can figure out what their plan will be moving forward.

The group of 11 men is the second wave of fishermen to refute charges they acted illegally by fishing for chinook salmon on Alaska’s Kuskokwim River in late June.

Unlike the first handful of defendants to fight the illegal fishing citations, this second batch of men intends to argue it’s against the law to criminalize what in their eyes amounts to a constitutionally protected religious freedom.

State fishery managers restricted access to the Chinook salmon, also known as kings, because too little were returning to the river. No one knows with any certainty why the fish have disappeared. Even so, emergency conservation of salmon runs up the river to spawning grounds trumped fishing opportunities, even those generally impinged on last: Access to the fish by village fishermen looking to feed their families.

The first trials, held last month in the Western Alaska regional hub of Bethel, didn’t end well for the men who tried to argue they hadn’t been aware a fishing ban was in place the day they wet their nets. Alaska State Court Judge Bruce Ward ruled the men should have done more to find out about the rules before they climbed into their boats. And, in at least one case, he simply didn’t believe the defendant’s claims of naiveté, saying it seemed obvious the man knew he was using an oversized net when he lied about it when contacted on the river by law enforcement.

Getting at the truth of what happened is simple: Did the men fish, or not, during a closed period? But the “why” behind the decision to fish this summer is a more complicated mesh, one in which civil disobedience, hunger and cultural preservation are intertwined, tangled with state laws, river management and divided emotions.

And now, a civil rights attorney handling the cases on behalf of the fishermen has given prosecutors notice the defense intends to change its strategy. Citing the First Amendment of the Alaska Constitution, attorney James Davis plans to show that subsistence fishing in Yup’ik culture is as important as providing fresh moose meat during the Athabascan funeral rituals, known as potlatches, of Interior Alaska’s indigenous people. Not only will his clients argue, as with the first batch, that they didn’t know they were breaking the law, but also that the state fishing bans shouldn’t apply to them, that it’s unconstitutional to criminalize a protected right to religious freedom and cultural identity.

Don Mitchell, an attorney and historian in Anchorage, thinks Davis is advancing a “hail Mary” argument. Mitchell, who helped secure for Alaskans a rural-subsistence preference in federal law, has a difficult time equating fishing out of motorized boats with gill nets for salmon that will go to drying racks and be used for food for the winter with any sort of established communion.

“If those are the facts, I have a difficult time believing that it has anything to do with religion,” Mitchell said.

Telling a Yup’ik person he or she can’t go out and fish is “like telling a Catholic they can have mass, but only with the Eucharist or the wine, not both,” Davis said in an interview after filing his motion.

The drive to hunt and gather food is so strong, and for Yup’ik people in particular for king salmon — the fish at the center of their culture, that it’s not unlike other religious compulsions, Davis said. Muslims celebrate Ramadan; Christians celebrate the birth of Christ in December; Yup’ik people fish for salmon.

The fact that the fishermen were willing to risk a run-in with Alaska State Troopers and agents from the U.S. Fish and Wildlife Service is a testament to how deep the convictions of the Alaska Native fishermen run, Davis said. “The last thing they want to do is confront a state trooper, but they just felt like they had to do it,” Davis said of some of the defiant fishermen.

To help the case, Davis has found Chase Hensel, someone he describes as an expert on “Yup’ik culture and the nature of religion” who holds a Ph.D. in Social-Cultural Anthropology from the University of California-Berkeley. Hensel will be able to explain why subsistence fishing is a “necessity” in Yup’ik culture, Davis said in a motion alerting the court to his new strategy and his desire to both consolidate and delay the cases.

For authority on the new tactic, Davis points to a 1979 ruling by the Alaska Supreme Court, which found that a hunter who’d taken a cow moose in 1975 to help supply the food needs to a potlatch was within his right to do so, even though law enforcement and the lower courts had deemed otherwise. Moose were out of season during the man’s hunt, not to mention that there was no season in which cow moose were legal to hunt. The lower courts had found that while “the funeral potlatch is an integral part of the cultural religious belief of the central Athabascan Indian,” and moose is an “integral part of the diet,” indeed the “staff of life” to the Athabascans, it was not a “specifically required” aspect of the funeral potlatch itself.

Alaska’s high court, however, found that the state failed to show how limited exceptions to hunting regulations would harm the overall management of game. It also cited observations from the U.S. Supreme Court and others about how various hunting laws and regulations had harmed the religious and cultural freedoms of Native Americans, and how religiously-motivated compulsions can sometimes be so important to a person’s sense of self and moral fiber that they are either unwilling or unable to comply with laws that threaten their core identity.

Thirty-three years after that ruling, popular sentiment regarding fish and game resources doesn’t seem to have changed much.

State attorneys had at the time noted that “Alaskans seem to have a marked tendency to come unglued over fish and wildlife issues.” Because of this, they warned there would likely be a non-observance of state game laws and a “downward spiral into anarchy,” complete with “poaching and creek robbing,” and “tragic confrontations” between recreational and subsistence hunters.

In 2012, the arguments were less colorful, but contained the same core undertones: all Alaskans, Native and non-Native, urban and rural, must abide by the law.

“I’m sympathetic all the way around. Obviously people need to fish out there,” Mitchell said. “On the other hand there hasn’t been any showing of bad faith on the part of fish and game regarding their belief that there wasn’t any fish in the river.”

Mitchell has for years been on the opposite side of the growing sovereignty movement among Alaska’s tribes. He thinks lawyers who’ve become involved in the fight have “sold a bill goods about Indian rights and sovereignty” to Alaska Natives, and have done so when emotions and need of villagers for real power and real control in their lives is vulnerable to ideas about a better way of doing things. He has in the past argued that tribes in Alaska are not the same as tribes elsewhere. In a 1997 interview, he told the Anchorage Daily News “Congress did not intend to treat Alaska Natives as it did Indians in the Lower 48.” Mitchell made the comment while describing the content of a book he’d authored, entitled “Sold American” and which the newspaper described as the first of two volumes exploring the “political and legal history of Native relations to the land.”

From his perspective, it’s understandable that villagers in Alaska have had enough of being told how to do things by other people.

Since the 1960s, outsiders have brought a myriad of so-called improvements to rural Alaska, but most of those changes and the technology that comes with them are still controlled by outsiders, leaving villagers helplessly waiting on someone else to come solve their power problem, or communications failure, or a water plant issue. Even fishing regulation is a system controlled by fish and game biologists, who often don’t live in the community.

When someone comes to you and says, “‘You don’t have to take this shit anymore. You’re a sovereign Indian nation,’ that’s very attractive,” Mitchell said.

Mitchell believes there’s no chance the fishermen will succeed with this latest defense. “Think of the implications of that. Religion isn’t culture. If somebody bought that this actually was legitimate, then anybody can run around doing whatever they want, harvesting whatever they want, without paying any attention to any conservation regulation. No one is going to allow that.”

‘All the difference in the world’

Arguments against allowing subsistence fishing in the face of declining runs have included the “worst-case” scenario that the fish will be fished to extinction. Davis counters that if conservation is truly a driving motivation, then the state and federal governments would do more to diminish salmon bycatch on the high seas, caught before salmon ever have a chance to return to the rivers.
For Davis, it’s pitting the least powerful end-user, isolated fishermen from small villages with little to no economic stake in Alaska commerce, against moneyed and powerful big business commercial fishermen. “Little fishermen are a lot easier to control,” Davis said.

This argument puts at odds, potentially, the economic well being of commercial fishermen against the cultural impact to a people whose culture is dependent on salmon. And not just any salmon, but king salmon. Davis further argued that because the Alaska Native people of the Yukon-Kuskokwim River systems are so reliant on king salmon as the living cultural and spiritual icon at the center of their identity and well-being, they have a natural motivation to not overfish. If the salmon die and never return, they risk harming the very culture they are fighting so hard to preserve, Davis said.

To people who believe the problem might be solved by merely fishing for a different kind of salmon, or during a different period in the summer — after the kings have safely migrated up river — Davis contends such concepts represent a severe disconnect from the fundamental world view of Yup’ik people.

King salmon aren’t replaceable, and fishing must occur early in the summer for optimal drying and processing to take place. “To a Yup’ik person, it makes all the difference in the world,” Davis said.

Davis currently has 21 of the fishermen as defendants, and may take on a few more before the saga is over. He’s asked the court to consolidate all of the cases into one, to expedite the process for all concerned.