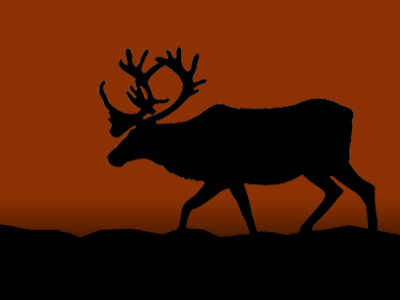 The same symbolic animal that kept oil drillers from punching into the Arctic National Wildlife Refuge could also hinder development in another potentially oil-rich area to the west.

Calving caribou have ideal habitat at Teshekpuk Lake in the National Petroleum Reserve-Alaska (NPR-A), and oil exploration there could push them to more dangerous grounds, a recently released study found.

The 22-mile-wide lake has long been recognized for its valuable waterfowl habitat.

The Bush administration in 2008 put the lake and 420,000 acres to the north and east off limits to development for 10 years.

Now, conservation groups are calling on the Obama administration to extend those protections indefinitely to help caribou, and to expand the amount of protected land. That could happen soon, when Interior Secretary Ken Salazar signs off on the reserve’s first-ever management plan.

President Warren G. Harding set aside the Indiana-sized reserve for the U.S. Navy shortly after World War I. Companies have tried for years to get their hands on the oil there, but only minimal exploration has occurred and nothing’s ever been produced. That’s ticked off many Alaskans worried about the state’s diminishing petroleum production. The proposed management plan would still allow oil leasing in portions of the reserve and keep open large areas for oil pipeline construction.

The caribou study reviewed six years of data that tracked 41 collared female adults in the 55,000-strong Teshekpuk Caribou Herd between 2004 and 2010. It was written by a scientist for a conservation group, but a ConocoPhillips researcher and several others, including state and federal wildlife biologists, served as co-authors.

The lake offers features that exist nowhere else in the reserve, said Ryan Wilson of The Wilderness Society, the study’s lead author. Especially important is the density of nutrient-rich sedge grasses the caribou feed on.

Also critical is that few bears or wolves occupy the area — perhaps because it’s too marshy and offers poor denning — a bonus for pregnant caribou and weak calves.

The Wilderness Society approached the BLM about doing the study and quickly won the agency’s support. The agency had wanted to undertake the same work, Wilson said.

The BLM cites the research in its preferred alternative of the proposed management plan, which calls for expanding protections around the lake, Wilson said.

The results helped land managers understand what areas to protect. Many people have seen photos of caribou grazing near oil fields on Alaska’s North Slope and might assume the animals are immune to such development, Wilson said in a write-up for the conservation group.

“This couldn’t be further from the truth, though, when females have newborn calves,” he wrote. “During this critical period of the year, disturbances associated with industrial development can push caribou away from their best food sources and the areas they use to keep their young safe from predators. This can result in lower survival rates for calves, and make adult females less likely to bear young the following year.”

Another Alaska herd, the 350,000-strong Central Arctic Herd, has lived with Prudhoe Bay oil development for decades. But the herd faced new struggles after industry arrived, reports the study, released earlier this month.

“After development occurred in a portion of the core calving area, the calving area shifted to the south, vegetation composition of the new areas differed, and displaced females showed evidence of lower productivity and calf survival,” it says.

Calving caribou have also played a key role in keeping oil and gas exploration out of the 19-million-acre Arctic National Wildlife Refuge (ANWR) in northeast Alaska — one of the biggest environmental debates in recent decades.

BLM’s preferred management plan for NPRA also calls for protecting two key corridors branching off the lake, Wilson said. Caribou use the roughly 10-mile-wide swaths to reach the Arctic coast when clouds of mosquitoes descend. Sea breezes and cooler temperatures near the ocean help keep the bugs away, Wilson said.

“The need for these migratory routes makes it extremely important that they remain free of development that would hinder movement of the caribou herd,” Wilson wrote in his article.

Lincoln Parett, a state Fish and Game biologist, led the field work for the study, collaring caribou with GPS-tracking devices.

Observations about the lack of predators around Teshekpuk date back for years, he said. Researchers are now studying calf survival in the area. “In 22 years, we’d almost never seen a wolf on the calving grounds. And you see a few bears, but hardly any,” Parett said. Golden eagles that can kill calves are rarely found either, he said.

Interestingly, now that the study has ended, calving Teshekpuk caribou have made an “astonishing” shift away from the lake, moving about 50 miles to the west and elsewhere, he said.

He’s not sure why the animals are moving for the first time in a quarter-century, but said the changes seems bad for the herd’s numbers. The Teshekpuk herd is suddenly food for wolves, something researchers hadn’t observed previously.

“It looks like, so far, there is a penalty to being born outside the (Teshekpuk Lake) area. I don’t know why they’ve chosen to do that but they’re suffering a little bit for it,” he said.