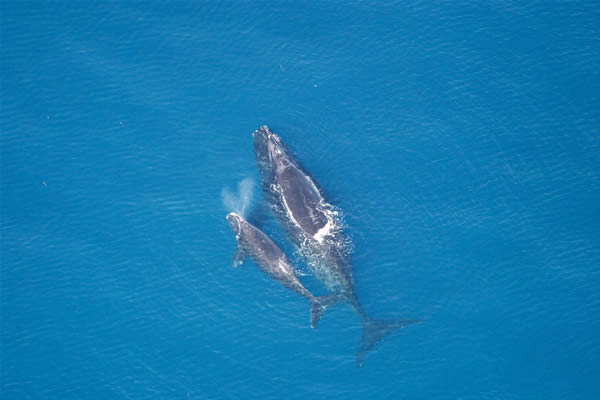 A population of right whales that call the Bering Sea and Gulf of Alaska home during the summer may have fewer than 30 surviving members. A new recovery plan from the National Marine Fisheries Service hopes to help protect that population and other North Pacific right whales — years after of whaling decimated their ranks.

Right whales were favored by whalers for centuries. They’re large — up to almost 60 feet long and weighing as much as 200,000 pounds. They’re also slow, and their bodies float after being killed, which made them prime targets for commercial whalers.

Whaling of the right whale was banned under the International Whaling Commission’s 1982 whaling moratorium. The species had been listed as endangered well before that — since 1973, when the Endangered Species Act came into existence.

Despite decades of protection, many right whale populations are still listed as endangered, including groups in the North Pacific and North Atlantic. In the North Pacific, there are two populations. The northwest population includes about 900 whales that spend most of their time in the waters near Japan, Russia and China. The northeast population migrates annually from the waters off of Alaska down the west coast of the U.S. to California and Mexico’s Baja Peninsula.

“There is reason for serious concern about the future of the eastern North Pacific right whale population,” the National Marine Fisheries Service (NMFS) says in the new report. “Because right whales are a long-lived species, extinction may not occur in the near future, but the possibility of biological extinction of the eastern population in this or the next century is very real.”

With only about 30 animals estimated to be alive today in the northeast group, the loss of even one whale could be catastrophic to the survival of the species in the area.

“The most significant threat to the eastern population is its extremely small population size, posing a heightened risk for biological extinction if individuals are lost to ship strikes or other threats,” the recovery plan notes.

The new plan also notes the increased threat of such ship strikes due to increased ship traffic in the North Pacific as vessels take advantage of a thawing Arctic marine highway.
Part of the recovery plan’s focus rests on knowing more about the elusive species, especially the eastern population. Because the whales travel so far each year and are so sparse, little hard data are available about the cetaceans and their habits. The plan is tentatively estimated to cost a little more than $17 million.

The recovery plan came into being after the Center for Biological Diversity threatened to sue the NMFS in March of 2012 for failing to develop a plan as required under the Endangered Species Act. Though center attorney Sarah Uhlemann said the plan was a step in the right direction, she emphasized that much still needed to be done.

“While a good plan is clearly important, it’s even more critical that federal agencies actually implement the plan’s recommendations,” Uhlemann said in a statement from the center. “All too often federal agencies produce great plans but little action.”

The plan presents no definitive timeline for the whales’ recovery, since so little is known about the species as a whole. The public has 45 days to comment on the proposed plan.