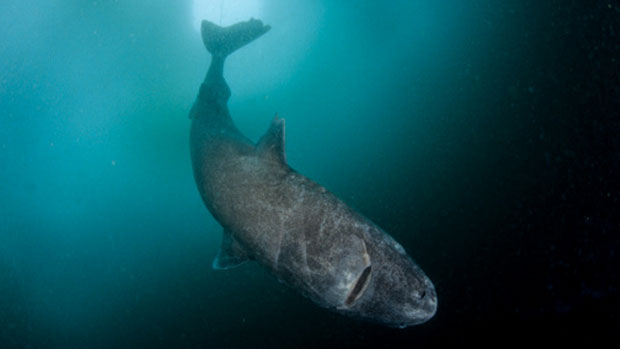 There are concerns that bycatch of Greenland sharks by the turbot fishing industry in Canada’s eastern Arctic territory of Nunavut, could affect the future of the species, of which little is known.

A fisherman from the Atlantic Canadian province of Newfoundland was charged Aug. 8 by Canada’s Department of Fisheries and Oceans officer for allegedly cutting the fins off the sharks to get them out of his hooks.

It’s common for boats in Nunavut to catch Greenland sharks by accident. Fishermen who accidentally catch the sharks are supposed to return them alive whenever possible.

“We release the ones that are alive, but there’s not much we can do about the dead ones,” said Lootie Toomasie, who is with the Arctic Fishery Alliance.

Sharks are attracted to turbot that are caught on long-lines set in the water, and they can become hooked themselves. Larger Greenland sharks are even known to eat other sharks already caught.

Toomasie says the sharks appear to be in the water at certain times or year, and not others. “Toward the end of August they seem to disappear. That’s when I think they head to Greenland,” he said.

A management plan posted on the internet by DFO says 93 tonnes of shark were caught as bycatch in the two fishery management areas off the east coast of Baffin Island in 2003. The management plan calls this a “relatively low” number. Greenland sharks can reach a massive size, the largest specimens over 1,000 kilograms.

Nunavut’s fishing industry has grown significantly since then. DFO refused to provide recent information about the bycatch of Greenland shark near the Nunavut community of Pangnirtung. A spokesperson said in an email that it’s a matter before the courts.

Nigel Hussey is with the University of Windsor, and part of a multi-year project with the Ocean Tracking Network researching the sharks. He said not much is known about the animals.

“Where do they reproduce, where do they pup, how many young do they have, what’s the actual age of maturity — these are things we have no idea about.”

The animals could live more than 100 years, but there’s no solid proof, said Hussey.

Hussey said older sharks could be more vulnerable to the fishing industry. However, populations are healthy right now.

“Given what we think the life history characteristics of these animals are, very slow growth, late age of maturity, producing very few young over a few years — it’s possible that these fisheries, over a few years, could very quickly impact the Greenland Shark populations,” said Hussey.

Researchers from the Department of Fisheries and Oceans are working on gear that would reduce bycatch.

Cabot is scheduled to appear in court Dec. 5.