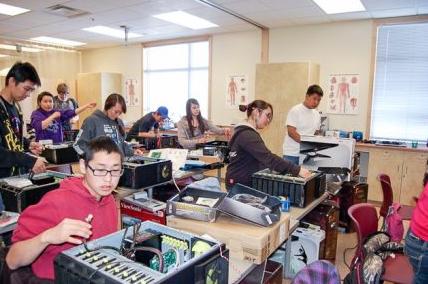 “Those are some of the most important years,” Ballard said from McGrath, a village of about 400 located 200 miles northwest of Anchorage. “You certainly don’t want to not be able to have that close family bond when they’re in high school.”

Ballard’s predicament is one many parents living in rural Alaska face. Legal rulings in the 1970s mandated high schools in tiny, off-the-road villages across the state. Before then, high school students had two choices: Stay in their village home, surrounded by family and a familiar culture, or leave to attend four years of boarding school.

While the Tobeluk Consent Decree, also known as the Molly Hootch Act, made it possible to establish high schools in off-the-road villages, those schools have struggled to keep up with their on-the-road counterparts. Some parents, like Ballard, watch their children leave home for Mt. Edgecumbe — a state-run residential high school with about 400 students from across the state — or move to Anchorage or Fairbanks to pursue educational opportunities unavailable at village schools.

“Those opportunities to learn and explore a wide and deep curriculum that you might have on the road system just isn’t available to them.” Ballard said.

The current state of rural high schools has some Alaska education leaders hoping to change how the 49th state funds residential high schools.

Pitching board of education

Jerry Covey, a former Alaska commissioner of education now working as a nonprofit consultant, will ask the state board of education on Dec. 6 to consider amending a regulation regarding statewide residential education program stipends to include district-based and variable-length residential programs.

Such a change would be the push some rural school districts need to start establishing their own residential programs while boosting regional programs already in existence.

The programs won’t create boarding schools that send students away from home for four years of high school. Instead, they would send students to schools within their region for several weeks — or even a semester — at a time. Advocates say that by bringing more students together, the programs provide better learning opportunities while allowing students to stay reasonably close to their families, their communities and their cultural heritage.

“It’s not meant to disadvantage anyone,” Covey said. “We’re not requiring anyone to participate in the (boarding school) programs. But I think it has some great advantages for our state.”

Mt. Edgecumbe has a long, storied history of producing notable alumni, including rural Alaska legislators like Albert Kookesh and the late Al Adams. Other residential programs, like the Chugach School District’s Voyage to Excellence, have graduation rates as high as 98 percent over the last eight years. In Bethel, the RANSEP residential program has noted major language arts and math improvements in just two years.

Covey said such a fundamental change would provide students opportunities in high-level math classes and science labs as well as access to study groups — all while staying in their home regions.

The proposal has already found support. Citizens for the Educational Advancement of Alaska’s Children (CEAAC) hired Covey to push for the change and communicate with educators across the state. In October, the Alaska Federation of Natives, the largest Native organization in Alaska, passed a resolution of support.

A report Covey delivered in March describes the outlook of rural education in Alaska as bleak. “Alaska’s system of small, off-the-road high schools deliver, for the most part, a second-rate education system that denies rural students the educational opportunities their on-the-road system counterparts enjoy.”

Covey also looked at data from the Alaska Performance Scholarship, a program established by the state Legislature in 2010 that awards scholarships to Alaska high school graduates based on overall grade-point average and a rigorous courseload.

According to the 2012 Alaska Performance Scholarship Outcome Report, 38 percent of white high school graduates were eligible for scholarships awarding up to $4,700 per year for college or vocational training in Alaska — but only 8 percent of the Alaska Native grads were eligible. Natives made up 18 percent of Alaska’s high school senior class last year.

Much of the disparity comes down to educational opportunities in rural schools. Covey said many small high schools only have one or two teachers. Usually those teachers are “highly qualified” in one subject, even though they’re required to teach an array of courses. The scholarship requires four years of math, something that’s not going to be taught if a school’s only teacher is highly qualified in English.

A lack of opportunities has forced some students to get an education outside the village.

The state funds schools based on formula that is student-driven. If a student leaves a district, funding follows him or her. Say a student living in Anchorage attends school in the Matanuska-Susitna School District — that money gets allocated to the Mat-Su. The same happens if a student in rural Fort Yukon heads to boarding school in Galena — although with so few students in those villages, the financial impact is much greater.

Ballard said in the last two years, 34 students have left the Iditarod School District to attend boarding school. With only 180 students being taught in district buildings, that’s a hit, especially for already small class sizes

“You have a high school cohort of potentially of 15 kids and say seven or eight of them leave. It’s pretty devastating for them,” he said. ” … (The students) start to feel pretty isolated.”

Several residential programs across the state are already in place. Take, for example, the RANSEP program — a Rasmuson Foundation-funded arm of the Alaska Native Science and Engineering Program housed within the University of Alaska Anchorage. About 20 students a year travel from villages in the Yukon-Kuskokwim region to Bethel to complete high level math and science courses not available in their home villages.

The students spend one semester attending Bethel Regional High School, the next semester in their village school, followed by a summer at UAA.

Currently, the students are housed with host families in Bethel, but dorm facilities should be finished by January 2014. Kurt Kuhne, executive director of Yuut Elitnaurviat, a non-profit vocational learning facility in Bethel, is in charge of housing the students. He said the host families receive $675 a month to house a student.

He noted that in Bethel, the regional hub of western Alaska, costs are high. Electricity can cost 50 cents a kilowatt hour and gas is $7 a gallon. Housing students, especially in rural Alaska, is going to cost more. But the in the long run, the community benefits are great.

“To talk about the investment, the alternative is having kids graduate totally unprepared for post-high-school success,” he said.

In Anchorage, the Chugach School District (including Chenega Bay School, Chugach, FOCUS Homeschool, Tatitlek Community School, Whittier Community School) has run the Voyage to Excellence program for 16 years, taking students from rural Alaska and bringing them to Anchorage for several days at a time to learn career, leadership and social skills. The program offers job shadows and internships, as well as high school exit exam preparation. While the program is open to all students, it tends to attract high-risk youth, said superintendent Bob Crumley.

While students come from across the state, the program is not considered a statewide residential program — and is not eligible for the residential stipend. Crumley said that has made funding a challenge. The program is funded through numerous grants, partnerships with other school districts and assistance from Alaska Native regional corporations. He said it costs about $400 per student, per day, to board them in one of the program’s residencies. Either opening the period to apply for statewide status or changing how the residential stipend is distributed would help.

“We’ve tried to find any way possible to find the resources to keep this program going,” he said. “Everybody wants to see it succeed, but sustaining it is our issue right now.”

The Alaska Gateway School District, based in Tok, sees a change to the stipend as a way to move forward on its hopes for a district-based residential school. Superintendent Todd Poagh would like to one day build a 25-bed facility in Tok, with the plans of busing students in from the communities they serve on Sunday and sending them home on Friday. Poagh said the district would try to cater classes to whatever jobs are needed in the community, like home care, nursing or welding.

While the school district would need to find capital funding to finance the project, he said it would be easier to take on a project knowing more funding is available.

While the program is expected to cost the state more in terms of funding the stipend, Covey believes cost won’t be a huge factor. Funding is based on a formula the state uses, so how many schools gain approval for the stipend and where they are located will play into the costs.

“I don’t envision a lot of these schools,” Covey said.

Plus, with some schools only needing the stipend for smaller amounts of time. The Voyage to Excellence program, for instance, works with about 240 students a year — but it won’t need 240 stipends.

Wohlforth with Citizens for the Educational Advancement of Alaska’s Children said that while funding residential schools will be a challenge, there’s “no reason to throw up hands and say we shouldn’t have school.”

“This is part of our state, it’s never going away,” he said. “But we need to be making sure those kids have the same opportunities.”