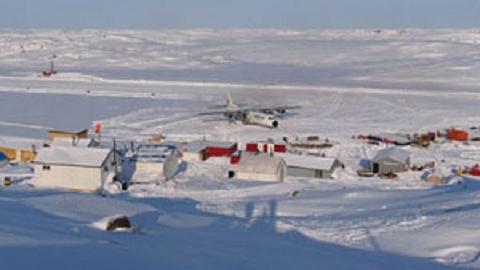 Organizations in Canada’s eastern Arctic territory of Nunavut and beyond are lining up to take part in the environmental review of the Izok Corridor Project.

The international company MMG wants to build two mines southwest of the community of Kugluktuk, Nunavut. All of the mining and construction will take place within the territory, but many groups outside Nunavut say they also need to have a say.

The proposed project would see two mines joined by a 350-kilometre all-weather road and a port in the Coronation Gulf, and would have a significant environmental impact.

“Izok Lake will need to be dewatered to be able to access the ore deposits,” said Derrick Moggy, who is with the Department of Fisheries and Oceans.

Moggy said he’s concerned about the road, which will include 70 bridges.

Others worry about the mine’s impact on the sensitive Bathurst caribou herd. The road will cut through what some consider to be the animals’ core calving grounds.

Many aboriginal groups rely on the Bathurst caribou, from the Dene in the Northwest Territories, to the Athabasca Denesuline in Saskatchewan.

“The potential ecological and socio-economic impacts on the herd need to be considered in a transboundary forum,” said Kris Brekke, from the Canadian Parks and Wilderness Society in Yellowknife.

About a dozen outside groups have written to the Nunavut Impact Review board to ask that the project be reviewed by a federal environmental assessment panel that would include aboriginal groups from outside the territory.