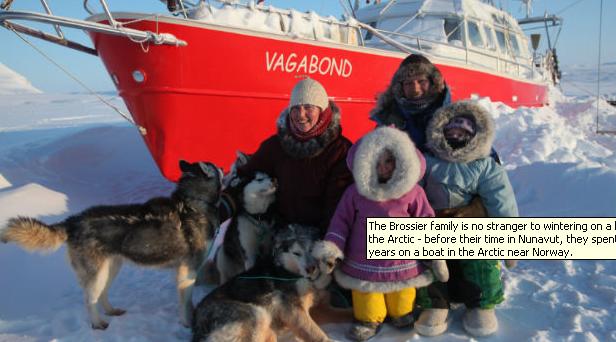 A young family from France is spending their second winter in Grise Fiord, a community in Canada’s eastern Arctic territory of  Nunavut, on a yacht. It’s something many Arctic explorers have gone through — overwintering on a boat.

The family’s vessel, the Vagabond, is now frozen in ice in the bay. It’s a 15-metre polar yacht captained by Eric Brossier.

He has a unique crew made up of his wife and two daughters, who are three and five years old.

This is the second year the family has spent in Grise Fiord, but Brossier and his family are no strangers to living on a boat in the Arctic. They also spent five years on a boat near Spitsbergen, which is an island in the Norwegian Arctic. Brossier’s eldest daughter was only 12 days old when her parents first brought her on board.

“Our neighbours were really the polar bears. I think we saw 800 polar bears in five years so it was not many people,” he said.

Last winter, they were 50 kilometres away from the community and only went to town once a month or so for supplies. This year, they’re right in the town.

He said they prefer this life to a bustling city life they would have back home in Europe.

“We live here without any agenda and without any tight schedule. When you start something you have time to finish it,” he said. “Of course there are some things we cannot do. We miss mainly our families but we are already with our own little family… and it’s easier nowadays to keep in touch with Skype and the internet.”

Brossier studied ocean engineering, but knew he didn’t want to work in an office.

“So that’s how the idea of having a boat where I could gather scientists on board, also filmmakers or photographers or adventurers that need some support in logistics,” he said.

Brossier helps do scientific work for geophysics and oceanography researchers based in the Canadian cities of Victoria and Toronto. He said that in order to improve the models which predict climate change, more field measurements are needed.

“So what I have to do is measure the ice thickness over larger areas. I have to monitor the increasing and the melting of the snow layer, and the ocean characteristics.”

He said it’s too early to see changes from his measurements last winter, but he has seen changes over the past 13 years of sailing in the Arctic.

“Maybe more bad weather now in September than it used to be. At least the sea is a bit more rough because you have less ice to calm it down. So sailing is a bit more tough but it’s also less difficult to access like on the east coast of Greenland,” he said.

Brossier and his family will stay in Grise Fiord until July, when the ice breaks up. Then, they will travel to Greenland where they have spent the past two summers doing more research.

Brossier isn’t sure where they will spend next winter at this point, but he said they now have a strong tie to the community.