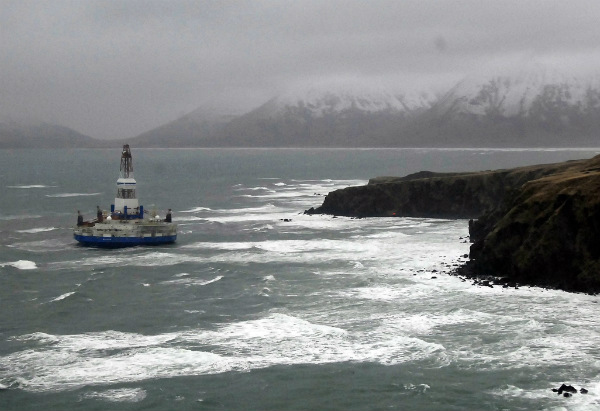 Schematics of Shell’s Kulluk drilling unit, grounded since New Year’s Eve off of the southwestern shore of Alaska’s Kodiak Island, show that its fuel oil storage tanks are oriented away from the shore, potentially making them less prone to puncture as the unit sways on the rocky beach.

The schematics, submitted by Shell to the federal Bureau of Safety and Environmental Enforcement in May 2011 as part of the required Oil Spill Response Plan, show the arrangement of compartments in the conical drilling unit’s hull.

The diagrams show the three tanks, used to store fuel for drilling and other equipment aboard the rig, are located just beneath the helipad, which released images show is facing parallel to the shore rather than directly toward it. The tanks are the only locations of diesel fuel on the vessel according to Unified Command spokesman Mike Lutz. 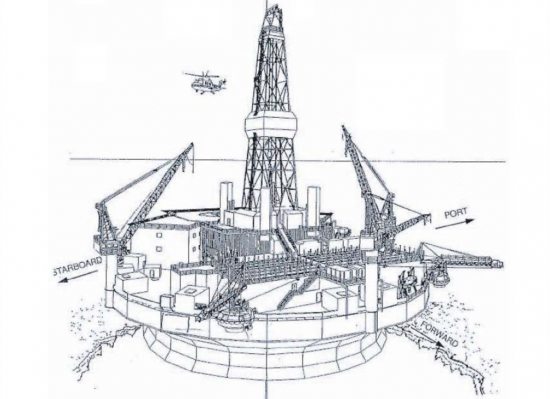 Ballast tanks — which are designed to be filled with water — face the shore side.

The Kulluk remains upright, and there is no visible oil sheen or any indication of any spill, according to information released by the Unified Command center Thursday. Offical reports of the amount of fuel aboard the Kulluk has varied in recent days. The latest numbers indicate there are 143,000 gallons of diesel fuel on the vessel and another 12,000 gallons of other products like lubricants and hydraulic fluid. 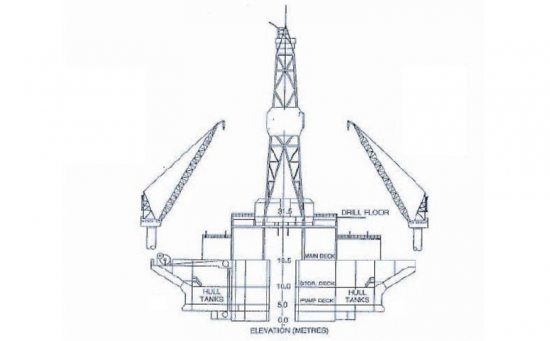 Sean Churchfield, incident commander and operations manager for Royal Dutch Shell Alaska, offered few details on the overall condition of the Kulluk and had no update on the vessel’s hull. During Wednesday’s short press briefing, officials said the fuel tanks were intact, but that a tank in a “void space” that was “sucking and blowing” and could be cause for concern.

Whether or not ballast tanks aboard the Kulluk have been breached remains unknown as of Thursday. It’s also unknown whether a breach in the ballast tanks would affect the stability of the rig should it be lifted from its resting place. 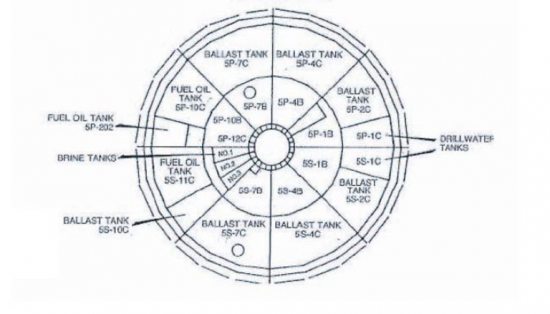 Salvage crews continued their assessment of the beached Kulluk drilling unit Thursday, offering little new information three days after the vessel ran aground. Preliminary inspections indicate that the Kulluk has sustained some damage since it beached on Sitkalidak Island New Year’s Eve.

Churchfield said in press briefing Thursday that waves have damaged the topside of the vessel, emergency and service generators are damaged, and “several” watertight doors have been breached, causing water damage in the vessel.

Churchfield and others from Unified Command — the joint recovery effort consisting of Shell, U.S. Coast Guard, Noble Drilling Corp. and Alaska Department of Environmental Conservation — gave no timeline on how the salvage would proceed.

“We are still gathering the data and damage to the Kulluk,” Churchfield said. “We have no completed assessment to pass back.”

Churchfield did note that emergency towing equipment had been placed on the vessel, though there was no clear option on how salvage efforts would move forward, only saying that “options are being developed.”

Coast Guard Capt. John Mehler said he has requested a full investigation from the Coast Guard Center for Excellence regarding the salvage operation. Mehler said that while Shell is taking an “active role in the response,” it’s his job to to ensure industry provides sufficient resources in the response effort.

“If at any point I am not convinced, I will deploy all assets as necessary to this operation,” Mehler said.

Weather at the site of the grounding, which has been a factor keeping inspection crews from boarding the vessel, has improved significantly since Tuesday. Winds in the area are expected to be up to 20 miles per hour on Friday, with 9-foot seas expected.

Arriving to this point

The Kulluk’s troubles started on Dec. 27, when a tow shackle between the drilling rig and its tug, Shell’s Aiviq, failed. A second towline was attached, but later the engines on the Aiviq failed, leaving the two vessels adrift at sea. The 266-foot diameter Kulluk has no propulsion system of its own.

Over the next several days, more tugs were called in from across Alaska, but all struggled to hold on to the drifting Kulluk. By Monday, rough seas and more problems forced a tug crew to let go of the Kulluk, sending it drifting into the rocky shoreline of Sitkalidak Island.

Concerns have turned to protecting the area’s salmon streams and sea lion and seal rookeries from contamination in the event the Kulluk begins to leak.

Shell has invested more than $4.5 billion since the mid-2000s in a quest to reignite a controversial Arctic drilling program that it started in the 1980s. The Kulluk was one week into a three- to four-week journey from the busy Aleutian port of Dutch Harbor to Washington state, where the rig was expected to undergo routine maintenance in an effort to prepare for the 2013 drilling season.