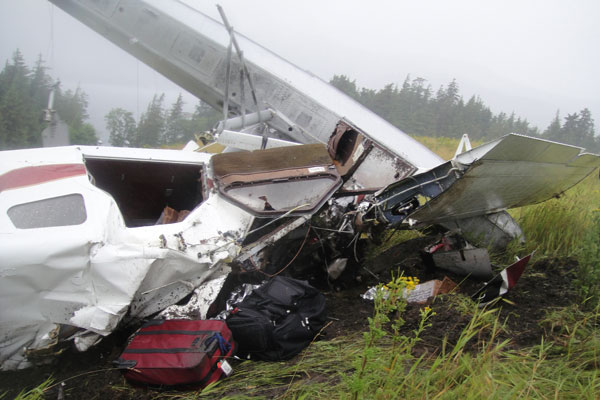 After a couple of rough years in Alaska aviation, 2012 offered a relative bright spot with 11 fatalities, almost half of the deaths of the previous year.

When the National Transportation Safety Board last week released its report on the disappearance of pilot Brendan Mattingley’s plane in October of last year — determining that Mattingley was likely dead after his plane vanished over Cook Inlet — it brought the number of fatalities from Alaska aviation accidents in 2012 to 11.

While some will say that even one flying fatality is too many, that’s a big improvement. The previous year, 21 died — several in rare midair collisions — and 23 perished in 2010.

Was there one contributing factor? Are pilots simply being more safety-conscious? Are new technologies allowing pilots and passengers to survive crashes that otherwise would be fatal? Or is it just a little bit of luck?

Well, it turns out it may be a combination of all three. The Federal Aviation Administration and pilot organizations, through numerous safety programs, are taking a proactive stance on reducing aviation accidents, and the result has been a steady decline over recent decades.

Brian Staurseth, manager of the FAA’s Safety Team office in Alaska, said there’s been a two-pronged focus on increasing safety in Alaska. The first part, he said, focuses on pilots, offering them safety tips outside of the normal inspection and regulatory capacity of the FAA, simply making sure safety is a priority.

That includes visiting general aviation air carriers (general aviation is the term typically used for unscheduled commercial and non-commercial flights in small planes often associated with buzzing around Alaska’s skies) to educate and inform about safety.

“It’s mostly about giving them suggestions in a non-regulatory, and non-punitive atmosphere,” Staurseth said. “Most are very receptive, though there’s always those out there that don’t care what we’re doing there, we’re just from the FAA and they don’t want to talk to us.”

The second part, he says, targets passengers on general aviation flights. Passengers, Staurseth said, are “the other half of the equation,” and it’s important for them to know when a pilot is safely operating an aircraft when it comes to things like properly distributing weight and keeping the overall weight within a plane’s operating specifications. That’s accomplished primarily through public outreach including media commercials, he said.

A key piece of technology that the FAA and NTSB hope to focus on is upgrading aircraft Emergency Locator Transmitters (ELT) to the recommended 406 megahertz frequency, rather than the previous 121.5 MHz. The latter frequency isn’t even monitored by search-and-rescue officials anymore, which means the 406 ELTs, though not required, can be crucial to successfully recovering someone from the Alaska wilderness. Many planes still lack the 406 transmitter, making search and rescue difficult.

A March 2011 crash saw Forest Service employee John Burick in survival mode for four days after his plane crashed near Triumvirate Glacier in Southcentral Alaska. Unequipped with the newer ELT, Burick hiked from his downed aircraft to Beluga Lake before being rescued.

NTSB Alaska Chief Clint Johnson said that the 406 ELT upgrade “is still at the top of our concern list,” but other technologies also have emerged in recent years that make up somewhat for the lack of 406 ELTs. Among them: Spidertracks and SPOT, which Johnson said can “give you a breadcrumb” in locating a missing aircraft.

But perhaps the most important technology of recent years is the ADS-B program, a navigational aid that replaces radar with on-the-ground transceivers that provide pilots with real-time terrain and GPS data. In place in Alaska for more than a decade, the FAA hopes to implement the service nationwide by 2020.

Johnson said that he’s seen the results of ADS-B firsthand since he’s been with the NTSB, especially in the Yukon-Kuskokwim region of Southwest Alaska.

“It’s definitely helped over the years,” Johnson said of the technology. “In the 15-year timeframe since I’ve been here, we’ve seen a steady decline in the sheer number of accidents. When I first started, it seemed like every single weekend we were going out on multiple fatals out on the Yukon or somewhere.”

Still, Johnson said, the ADS-B technology is not a “save-all,” and other programs like the FAA weather camera system — encompassing hundreds of cameras around the state — have also helped reduce fatal accidents.

A game of chance

While improved technology and education certainly contribute to the improved accident numbers — a report from the Centers for Disease Control last year said as much — there’s still an element of chance in the year-to-year number of fatalities.

A May 2011 crash killed a family of five near Birchwood, and a mid-air collision in July of the same year killed four others. In 2012, the most fatalities resulting from any accident was just two — one crash in March and another in July. There were only two more fatal incidents overall in 2011 compared to 2012 with a total of 10 more deaths.

One fatal 2012 crash had an outcome that could have been worse, when a floatplane carrying five people crashed into Beluga Lake near Homer. Only one person, former state legislator Cheryll Heinze, was killed in that crash after being trapped in the submerged aircraft.

And now, as the first month of 2013 draws near a close without a fatal accident, Alaska aviators are surely hoping for another year of relatively safe skies.