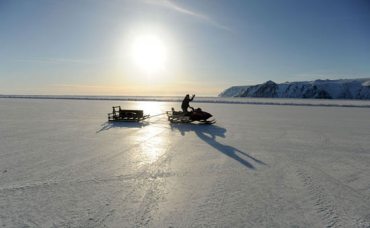 For years now, Alaska lawmakers have lamented the seeming lack of progress in developing the U.S. Arctic, as countries like Norway and Russia forge ahead with resource exploration and development and building infrastructure to take advantage of the economic potential of the world’s northern reaches.

Now, some Arctic policy experts are calling for increased cooperation between the U.S. and Canada in developing North America’s Arctic resources — but where to begin?

Norway and Russia, those countries arguably best taking advantage of their Arctic geography, have their own history of cooperation.

So, too, do the United States and Canada, but on a much different scale. Most of those latter countries’ Arctic successes have been in the environmental and scientific fields, with some additional cooperation between Coast Guards.

According to a recent policy paper produced by the Centre for International Governance Innovation (CIGI), Canada and U.S. cooperation could be key to taking advantage of increasingly sparse sea ice and newly-opened shipping routes, even in the often ice-choked Northwest Passage. Key to this, policy experts say, is developing new infrastructure.

John Higginbotham, a fellow at Carleton University in Ottawa and one of the authors of the paper, said that “many good things happen below the radar in U.S.-Canada relations,” but the fragmented nature of the two countries governments make coordination difficult. Multiple agencies in each country have different stakes in the Arctic, and can make different determinations based on their own interests.

“There would be an awful lot of partners involved in all of this,” Higginbotham said. “My own sense is that sometimes we make things too complicated. There is a requirement to collaborate at a very high level (on Arctic issues),” and not just at the departmental level, he said.

According to Andrea Charron, an assistant professor of political studies at the University of Manitoba and another of the paper’s authors, part of the hindrance in developing North American Arctic policy is the view of Russia and other Arctic countries as a “threat” when they take the lead in Arctic issues.

“I often think Canada and the U.S. are their own worst enemies when it comes to the Arctic, because we’re more paranoid about it,” she said.

Thanks to lingering competitiveness with Russia in the wake of the Cold War, that country’s superior fleet of icebreakers — including developing numerous new nuclear icebreakers — could easily be perceived as a threat to — or at least a major advantage over — other countries interested in Arctic development, particularly the U.S.

Meanwhile, the U.S. waits for its only active heavy-duty icebreaker, the Polar Star, to return to service after a $57-million revamp at a Washington state shipyard. In the interim, both Canada and the U.S. are forced to rely on one medium icebreaker apiece.

Attention from the top

Both Alaska U.S. Sens. Lisa Murkowski and Mark Begich have lobbied hard for additional icebreaking support and Arctic assets, but it seems that America’s Arctic interests take a back seat to other issues in Washington, D.C.

Murkowski said that it’s been an uphill battle getting the highest levels of the federal government interested in the potential of the Arctic. And it may be about to get harder — both Interior Secretary Ken Salazar, who had shown a keen interest in the American Arctic, and Secretary of State Hillary Clinton are already out or on their way out of office following President Barack Obama’s re-election. Murkowski said that both cabinet members at least had an idea of the strategic importance of the Arctic in overall U.S. policy.

Now, Salazar’s replacement might have to be convinced anew of the Arctic’s importance. The same goes for Clinton’s replacement, former Massachusetts Sen. John Kerry, a recent peer of Murkowski and Begich. Murkowski said she had already spoken with Kerry about the Arctic and its place in America’s foreign policy, but was hoping to press him further on it.

“I’m going to use next week to corner him to make sure that he’s going to make the Arctic a priority,” Murkowski said on Jan. 25, prior to Kerry’s swearing in as Secretary of State and his last week as a member of the Senate.

Murkowski said that it’s important to acknowledge the areas where the U.S. and Canada have already cooperated on Arctic matters — in particular with their Coast Guards — while still recognizing that there’s a long way to go.

“I wish I could tell you that the U.S. has placed as much priority on the Arctic as Canada has,” Murkowski said, “but my blunt opinion is that they have not.”

For the part of the Canadian government, policy expert Charron sees them as softening a bit on the subject of Arctic cooperation after a period of territorialism in the Far North.

“I think it’s quite unhelpful that the Canadian Government had been using pretty alarmist rhetoric of late when it comes to the Arctic,” Charron said. “I think they’ve realized that using that alarmist language is not particularly helpful, and they’re now revamping, or at least reviewing, the current Arctic foreign policy.”

Now is a good time for the U.S. and Canada to push for North American priorities in the Arctic, too. Beginning in May of this year, Canada and the U.S. have back-to-back chairmanships of the Arctic Council, lasting until 2017. Canada’s chairwoman is Leona Aglukkaq, an Inuk politician from the Arctic Canadian territory of Nunavut.

Under Aglukkaq’s chairmanship, it is expected that indigenous issues in the Arctic — things like food security and potential impacts of development — will be a high priority for the next two years, in addition to developing Arctic shipping infrastructure and advancing economic agendas. Aglukkaq is part of the Conservative Party of Canada, currently the government’s majority party.

John Higginbotham noted that the Conservative government is putting an emphasis on the Arctic’s economic potential, like trying to streamline the permitting process to operate in the far north.

“The focus right now is unambiguously on economic growth and economic development,” Higginbotham said. “There’s less emphasis on climate change and other things than in previous governments.”

Part of the problem with that aggressive expansion, he said, is that once you start looking to invest federal money in something like Arctic infrastrucure, many communities begin vying for that funding.

“As soon as you start mentioning significant federal money, all the birds in the nest want to be fed,” Higginbotham said.

Murkowski said that such infrastructure would be key to the U.S. and Canada catching up — or even having a chance to compete — in the Arctic. But other tasks might be easier to accomplish in the short run. She pointed to things like oil spill prevention plans and Arctic search and rescue agreements that have already been agreed upon by the council.

Then, she said, there’s some other low-hanging fruit to cross off the Arctic checklist.

“I hesitate to use the term easy, because nothing is easy in the Arctic,” Murkowski said. “But I do think you can agree between the two nations on improving navigational aids, or creating infrastructure for emergency response.”

In the meantime, the Arctic Council will also continue to focus on environmental protection in the Arctic, including the cleanup of radioactive material from Cold War sites. Russia is preparing to undertake just such a mission in the lead-up to further Arctic development, attempting to raise a nuclear submarine laden with enriched uranium.

Between the environment, local concerns, and economic interests, the U.S. and Canada have much to gain — or maybe much to lose — in the years ahead as the Arctic continues to thaw. Just how much they capitalize — or suffer — may depend on just how much they work together.