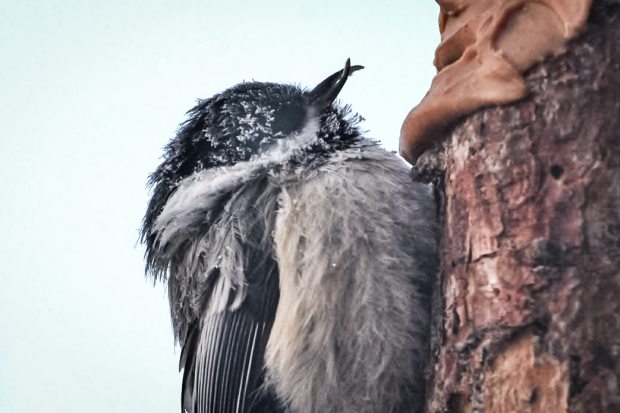 It’s been nearly 15 years since people started noticing a lot of Black-capped Chickadees in Southcentral Alaska suffering from overgrown beaks, a deformity that interferes with a bird’s ability to feed and preen. Although formal research efforts to study the epidemic were launched in 1999, and remain ongoing, it’s still not known what’s causing beaks to grow faster than normal. And now, the deformities are showing up in other species and regions in the U.S. and Europe.

“It forces us to think really differently about different causes,” said Caroline Van Hemert, a research wildlife biologist with the U.S. Geological Survey in Anchorage.

Scientists suspect the source of the cause is unique to Alaska and the Pacific Northwest. But the presence of the same affliction among some bird populations in the United Kingdom has led scientists to expand their theories.

In Alaska, about 6 percent of Black-capped Chickadees are thought to be affected. More recently, northwestern crows are showing up with the condition, with an estimated 17 percent of the population affected — the highest of any wild bird population anywhere, according to the Alaska Science Center. Before crows, chickadees had the highest known rates.

Downy Woodpeckers, Steller’s Jays, Black-billed Magpies, and Red-breasted Nuthatches have also been observed with the condition.

The unusual beak growth is similar to skin disorders where too much skin is being produced, sometimes growing two times faster than normal. Beaks can grow grossly long, curved, and sometimes cross over each other.

“We know that something is being turned on to accelerate the production of keratin in the beaks,” Van Hemert explained in an interview this week.

What that something is, she and her team can’t say. The only thing they really know is what’s not to blame. There does not appear to be a good genetic explanation, and human sources of food – from discarded left-overs to seed in bird-feeders – also isn’t showing promise as cause. Research into possible toxic chemical exposure has also failed to turn up a link. Fungus and bacterial infections haven’t yielded any clues, either.

“At this point we are trying to keep our minds open for things that aren’t so obvious,” Van Hemert said.

Birds with the deformity don’t eat or clean themselves as well as healthy birds, and are therefore more susceptible to hunger and freezing.

Mountain-dwelling Chickadees will generally look to insects, seeds and berries for a meal. Coastal crows dine on mussels, berries and even hamburgers — anything the opportunistic birds can scrounge up. With chickadees, researchers had found that birds with deformed beaks had diets more heavily reliant on feeder foods. But Van Hemert believes that doesn’t mean the food is to blame. More likely, once a bird’s beak is affected, it’s easier and more efficient for the bird to get its food from a feeder. And tests on known contaminants found in some feeds haven’t revealed a likely connection.

Alaska’s USGS team is working with Outside veterinarians and pathologists, using powerful microscopes to examine bird cells to see if perhaps a virus, or other classes of contaminants might be a cause. Both agents can be difficult to detect. It’s one thing to look for a known illness; quite another to be searching for an unknown problem.

Another puzzling question is whether the illness is infectious — meaning it can spread to other birds — or is localized to geographically discrete areas, which could point to an environmental condition.

“We know a lot about what it’s not. As frustrating as it is, we’ve come a long ways,” Van Hemert said. “What we all want to get to the bottom of, is why.”