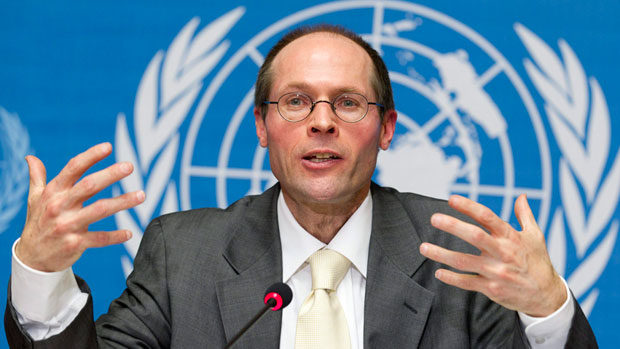 The UN Special Rapporteur on the Right to Food toured the country in May and his report was just released.

De Schutter says the minimum wage needs to be increased so people can afford to buy food, and the housing system needs improvement so that poor families do not have to sacrifice food to pay rent.

That struck a chord with Diana Bronson, the executive director of Food Secure Canada — a national organization aimed at eliminating hunger.

“I think what the special rapporteur has done is given voice to a lot of these concerns at really the highest international level,” Bronson said.

De Schutter toured the country for 11 days but he did not visit any of the territories. However, he did meet with representatives from Inuit Tapiriit Kanatami, the Inuit Circumpolar Council and the Government of Nunavut in Ottawa, including Member of Parliament Leona Aglukkaq.

At that time, she said he was ill-informed about the situation in the North.

Aglukkaq says she told De Schutter to push the European Union to change its position on the seal hunt. It banned all seal imports in 2009.

She says he refused and therefore lacks any credibility.

“So the recommendations going forward again I would say are short-sighted [and] does not reflect the Inuit culture.”

Aglukkaq says De Schutter should have gone north so he could be educated on the Inuit way of life.

De Schutter’s report will be formally presented to the UN Council on Human Rights next month in Geneva.

Feature Interview: What will it take to ensure food security in the Arctic?, Eye on the Arctic, Radio Canada International