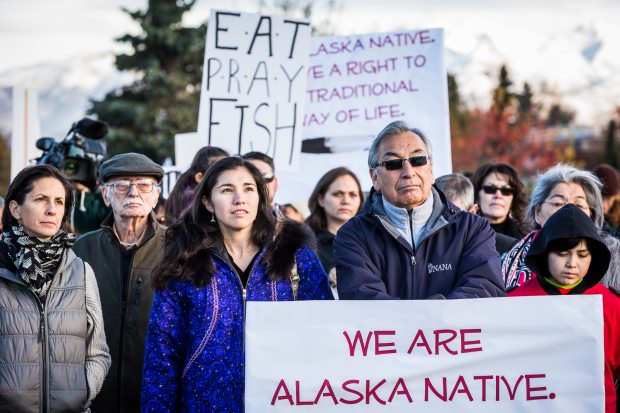 Nearly two dozen Alaska Native fisherman accused of violating fishing bans last summer on the Kuskokwim River in the southwest portion of the state have added a new twist in their efforts to clear their names. They’ll not only argue they had a constitutionally protected religious right to harvest king salmon, an animal at the center of Yupik cultural and spiritual identity, but that the state should have done more to curtail other users over the years in the face of predictably abysmal declines in the number of kings returning to the river.

New also is the appearance of the Alaska Civil Liberties Union, which is entering the legal fight on behalf of the fisherman.

Attorney James Davis of the Northern Justice Project doesn’t deny his 22 clients violated the law. Instead, he argues that the state failed to protect the fishermen’s religious rights to gain priority access to the fish among multiple users. He also argues the state should have employed a process by which, even in the face of dwindling returns, Yupik fishermen would have an established way to apply for permission to fish. It is on this second point that the ACLU is asking to join the case as a friend of the court, making its own arguments that there was no constitutionally protected relief available allowing fisherman to legally pursue spiritual and cultural practices.

Underscoring the fishermen’s angst is a worldview among the Yupik people that ties them meaningfully to all living creatures, Davis has said. They believe all animals have “yua,” or spirits, and that animals willingly give themselves to hunters, honored that they are desired and needed by the people. If the people stop seeking out and taking the animals, the animals will be offended and may not return. In summer 2012, the fisherman were effectively denied the opportunity to participate in the spiritually-driven and practical ritual of fishing for king salmon, thus interrupting an important connection to the life cycle of the animal world on which they rely, Davis explained.

The fisherman weren’t fishing to earn money. No commercial harvest on the king salmon has been allowed for years. Instead, they were fishing to fill their drying racks and freezers, to feed their families during the state’s long winter. Another species of salmon also swims in the river, another large fish called chum, but these are not as sought after as the prized kings. Both he and the ACLU have acknowledged it may be a world view non-Natives may find difficult to comprehend or value. But he emphasized that the standing of the Yupik people to pursue fishing as a religious belief is no different than Catholics practicing Mass. “The Yupik defendants in these cases fished in direct violation of state law. Some of these Yupik fishers fished at the direction of their elders. Some of these Yupik fishers fished at the direction of their tribal councils. All of these Yupik fishers fished in accord with their spiritual/religious beliefs,” Davis wrote in his most recent court filing. “That (Yupik) spiritual views are complex, interrelated with other concerns, and somewhat foreign to non-Native people does not, somehow, mean that (Yupik) spiritual practices, like king salmon fishing, are not protected by the First Amendment.”

For its part, the ACLU asserts there was no procedure through which the fishermen’s spiritual and cultural needs could be considered. The legal advocacy group isn’t saying that the cited fisherman should have been allowed to fish merely because they wanted to, or that the state can’t regulate the resource, but that the fisherman had no way to have their religious needs considered. “It’s about process. It’s not about guaranteed results,” said ACLU executive director Jeffrey Mittman.

This does not mean that “the free-exercise clause is a license to take as many fish as one wishes, nor that all Yupik people are entitled to take unlimited numbers of salmon,” the ACLU wrote in its court filing. “In the absence of even rudimentary consideration for the free exercise rights of Alaskans, the state should not be entitled to prosecute people for practices deeply rooted in their religion and culture for time out of mind.”

Trials of the fisherman are scheduled to take place in April.