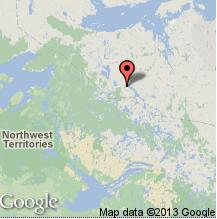 Elgin Mining plans to spend $9.5 million at site this year

The Vancouver-based gold mining company bought the property in 2011. Lupin was in operation between 1982 and 2004.

Last year, staff at the site made minor repairs to the mill building and equipment that was left under care and maintenance when the mine was closed in 2005.

This summer, Elgin plans to reopen the underground part of the mine, now blocked by ice, so they can start drilling to find out if the mine has enough gold left to restart operations.

A news release said the company plans to spend $9.5 million at the site in 2013.

It also says they hope to have people at the site camp for the entire year.

471 ♥ Inuit gov. in Atlantic Canada calls for people to stop travel to and from their region

360 ♥ Is Norway's farmed salmon as healthy as we think?