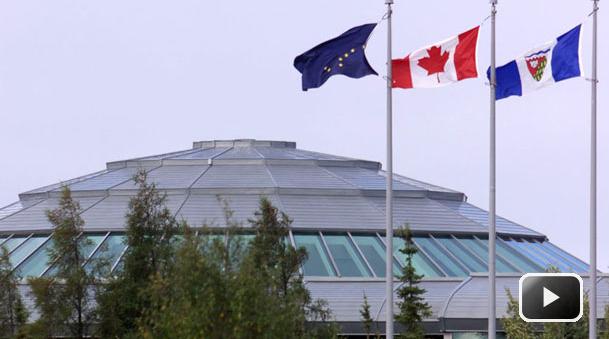 Only two territorial politicians voted in support of motion

A motion calling for a plebiscite on devolution got very little support in the legislative assembly of Canada’s Northwest Territories (N.W.T.).

Since the agreement-in-principle first became public two and a half years ago, there have been many questions about whether there has been enough consultation.

Bob Bromley, the politician representing the N.W.T. electorial district of Weledeh, brought forward the motion, saying residents voted before division with the eastern Arctic territory of Nunavut was finalized.

He said a public vote before the devolution deal is finalized would show how residents feel.

Bromley also made reference to a recent poll. The social justice group Alternatives North got EKOS Research Associates to ask residents about whether they would support a devolution vote.

Of the 400 people who responded, 68 per cent were in favour of a devolution plebiscite, 20 per cent were opposed, and 12 per cent were undecided. The poll’s margin of error was about five per cent, 19 times out of 20.

Most territorial politicians spoke out against having a public vote.

“The democracy that happened was when we were elected to make decisions for this territory. I think it’s in our hand to make the decisions and go forward. To have a plebiscite would be expensive,” said Robert Bouchard, the politician representing the N.W.T. electorial district of Hay River North .

Kevin Menicoche, who represents the N.W.T.’s Nahendeh electorial riding, said that if they hold one on devolution, why wouldn’t they have to hold one on the Deh Cho Bridge or the highway between Inuvik and Tuktoyaktuk.

“I haven’t received one phone call or email and I ran on devolution in the last election and every election. It’s time has come,” said Miltenberger.

In the end, cabinet and seven regular MLAs voted against a plebiscite.

Information sessions are planned across the territory for people who want to learn more about what’s in the 115-page devolution final agreement document, and what it means to them.

MLAs will then vote on whether to approve the final deal before it is official.