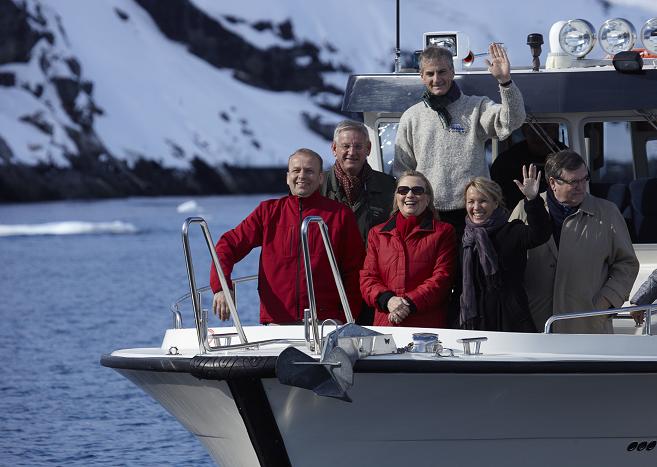 My first post on Eye on the Arctic, writing back in May 2010, addressed the concern that was pervasive at that time that the Arctic was heading for conflict over oil and shipping routes.  The concern was fuelled by a series of events – exhibit A, the Russian flag planting at the North Pole; exhibit B, Canada PM Harper calling for Canadians to “use it or lose it”, “it” being the Arctic – that occurred in the Summer of 2007.

These were magnified by the stupendously high prices of oil and gas of July 2008 which peaked at the same time that the United States Geological Survey released its bullish assessment of the undiscovered oil and gas resources of the area north of the Arctic Circle. China, South Korea, Japan and the EU all applied for observer status in the Arctic Council, and regional politics started to receive a fair amount of attention in foreign policy circles.

Inasmuch as there was legitimate concern of a conflict, the Arctic epistemic community responded in kind.  A blizzard of conferences, forums, meetings and working groups to discuss Arctic security were formed, and I’ve been privileged to attend a few.  In Canada in particular, we discussed ad nauseum the nature and limitations of our Arctic sovereignty and security and come through on the other side with as full and complete an assessment of the situation as could ever be needed. And the story here is that all of this collective brainstorming has actually produced some pretty remarkable results: the tension that was legitimately felt in 2007 has dissipated as each and every Arctic state has put forth an Arctic Strategy that proclaims their commitment and preference for peace, the legal resolution of disputes and regional cooperation.  These words have been followed by action with the resolution of the Barents Sea dispute between Russia and Norway in 2010; the signing of a Search and Rescue Agreement of May 2011, the first legally binding agreement to be negotiated under the auspices of the Arctic Council; the establishment of a Permanent Secretariat of the Arctic Council in January 2013; and continued efforts on an Oil Spill Response Agreement, expected in 2013; and mandatory IMO Polar Code for shipping, expected in 2014.

This is not to say that there is no longer any risk of conflict in the Arctic; but it is minimal and increasingly so.  As a transnational community, the Arctic has been more proactive, and I would argue more successful, than any in recent history in creating an environment where dialogue and trust are fostered and mutual interests are sought.  Let us remember that the Arctic was not much more, from an international relations perspective, than a theatre for the Cold War 30 years ago.  It is now a model of good regional governance, respect for indigenous rights, and commitment to sustainable development. The Arctic is not perfect; but I can’t think of a region that is more so.  And the debate has moved on from discussing an Arctic Cold War, even in mainstream newspapers.

The Arctic in the media

But apparently the New York Times never got the memo.  This week it ran two op-eds that leave little room for doubt for its over 1.5 million daily readers that the Arctic is still on the verge of some kind of conflict.  The first, “China Knocks on Iceland’s Door”, written by Einar Benediktsson, former Iceland ambassador to the United States;  and Thomas Pickering, former U.S. undersecretary of state for political affairs and ambassador to Russia and the United Nations; makes the case that Chinese interest in Iceland and the Arctic should spur the US to forge a closer relationship with Iceland on Arctic affairs, which is fine.  But they describe Chinese interests in a ham-fisted way, arguing that “it is not likely to support the unilateral decisions of the Arctic Council” in the context of UNCLOS and claims to the continental shelf and transit rights.  First, UNCLOS is the very antithesis of unilateral; it is one of the most successful multilateral treaties in international law, and the Arctic states have legal rights to make claims under it; and second, it is a stretch to describe the Arctic Council as acting unilaterally in any sense of the word.

They go on to describe China as “reaching out for a position in the Arctic, beginning in Greenland, followed by support facilities in Iceland … with potential use for naval vessels patrolling the Arctic and the Northeast Polar Passage” offering as proof a link to another op-ed piece in the NYT that actually describes speculation on Chinese military bases coming to Greenland as “farfetched” and “less than helpful”.  It is a caricature of Chinese interests in the Arctic and beneath the standards of both newspaper journalism and common sense.

The other piece, “Preventing an Arctic Cold War”, seems to have been written in 2008 but only made publication this week, as it ignores all of the progress made in the Arctic in the past five years.  The author, Paul Arthur Berkman, writes that while “there has been cooperation on extracting the region’s oil, gas and mineral deposits, and exploiting its fisheries, there has been little effort to develop legal mechanisms to prevent or adjudicate conflict…The most fundamental challenge for the Arctic states is to promote cooperation and prevent conflict. Both are essential, but a forum for achieving those goals does not yet exist.”

Has he heard about the Arctic Council?

He has. But he states that the Arctic Council shelved discussions on maintaining the peace when it was established in 1996, and “nations are still too timid to discuss peace in the region.”  I can only assume he is referring to the stipulation that the Arctic Council not discuss military security matters; but this certainly doesn’t preclude talking about peace. Among the questions Berkman seems to think the Arctic Council has not considered:

“How will each nation position its military and police its territory?”

“How will the Arctic states deal with China and other nations that have no formal jurisdictional claims but have strong interests in exploiting Arctic resources?”

Have the SAOs (Senior Arctic Officials) discussed anything but this question in the past 6 years?  See: Criteria for Admitting Observers, issued in 2011; further, definitive decisions are anticipated in 2013.

“How will Arctic and non-Arctic states work together to manage those resources beyond national jurisdictions, on the high seas and in the deep sea?”

“Without ratifying the Convention on the Law of the Sea, a 1982 treaty governing use of the world’s oceans, how can the United States cooperate with other nations to resolve territorial disputes in the ocean?”

Talk of Arctic conflict at what cost?

The point is not that everything is settled and the Arctic Council has no room for improvement; it does.  The point is that these op-eds, and the portrayal of the Arctic region and Arctic Council they deliver in a high-profile platform, is counter-productive.  As SAO Chair Gustav Lind wrote in the latest edition of The Arctic Herald, this kind of portrayal of the Arctic “distracts public attention from the great and sometimes difficult challenges the region is facing…not military conflict but the protection of the sensitive Arctic environment and improvement of the life of its citizens.”

The Arctic Council is no longer at a crossroads, wondering what should be done to avert conflict; it has chosen a clear path, one towards greater institutionalization of international relations and more meaningful cooperation.  What an achievement it would be if in the same six-year time span it took to move Arctic security concerns off the regional agenda, we could claim a similar level of success in environmental protection and human development.  And what a disappointment if the discussion still centred around the possibilities of an Arctic Cold War.