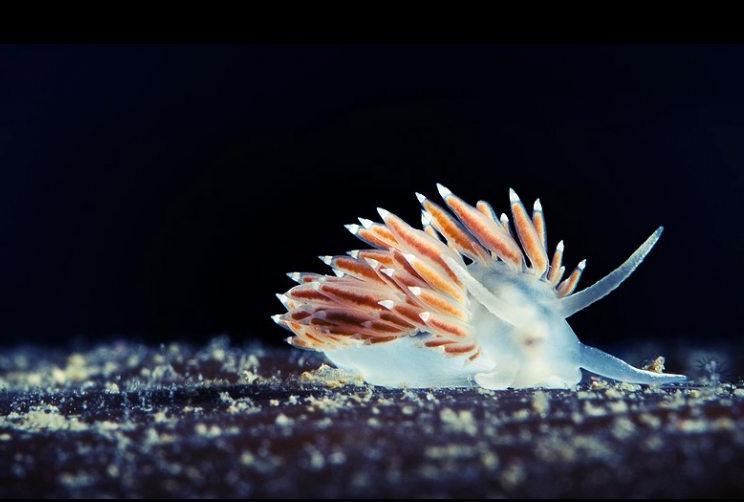 Arctic sea diving is a passion for Alexander Semenov, chief diver at Russia’s White Sea Biological Station, and so is photographing the creatures that inhabit the White Sea’s frigid waters. Semenov has been photographing the abundant life forms of the White Sea — a southern inlet of the Barents Sea off Russia’s northwest coast — for years, posting his photos on his website.

Semenov answered some questions via email regarding his work, his life and how he photographs creatures 65 feet under the sea.

Has diving been a life-long passion for you? How did you get involved in your current position with the White Sea Biological Station?

I grew up in a family of biologists, and was surrounded by tons of interesting books about animals during my childhood. Along with the TV show “The Underwater Odyssey of Commander Cousteau,” all this made a deep imprint in my mind. But I really fell in love with the sea after eighth grade, when my high school went to the White Sea to study invertebrates, which we collected from the sea bottom.

After high school I went to college to study invertebrate zoology. During my time there we practiced at the White Sea Biological Station, and I learned to dive during my third year to make the practice more interesting. That was in 2005. After graduation, I came to work at this same station and, as I already knew how to dive, joined the diving team. A few years later I became its chief. Now I can say with confidence that the ocean and diving are passions for life!

How often do you dive?

During the field season, typically one time a day. We have quite a big team, and cold water diving conditions are harsh and heavy, so if we need to dive a few times a day, I try to send different people whenever possible. When I go on my own small dive trips, I try to dive between 2 to 4 times a day.

How do you deal with freezing water temperatures? Do you wear a dry suit?

Well, to be honest, it’s freezing, even in a dry suit and a very warm underwear layer. By the end of the field season your body does not want to go under the water and freeze there terribly in just half an hour, but the water temperature is not even as cold as under the ice, which can be 28 degrees Fahrenheit! During field season it’s 43 or 46 degrees Fahrenheit, but that’s cold enough to limit diving to just 4 months out of the year. Of course, we use the warmest gear available, but still after a dive you really want to drink hot tea and sit somewhere warm. Cold water diving is rather hard work, but it’s worth it! And I love cold water, despite everything.

How many people work at the White Sea Biological Station, and for how many months during the year?

The station is pretty large, and there are a lot of people working on it. The technical staff alone is about 40 people, and the scientific staff adds another 15 people. But during the field season 80 to 200 people can be present at the station: Students of Moscow State University, graduate students, scholars and scientists from all over Russia and other counties as well. Field season lasts 4 months, from early June to late September, but the station operates year-round, and many scientists come to work in the well-equipped laboratories in the winter and throughout the year. Work at sea in winter time is almost impossible the sea is covered by ice and polar night comes to rule the day, but it’s best time to work in warm lab – you just don’t want to go out!

Do you travel to other stations often?

I have visited other biological stations, but not for work. It was exchange practice or just visiting as a guest. My first working trip is planned for this summer, in Australia. At the moment I’ve dived in only three seas: the White Sea, the Red Sea and the Sea of Japan, but soon there will be added a few more, I hope.

What camera equipment do you use? Do you use a flash to capture the animals? Are all the pictures the creatures’ real colors?

I use Canon 5dm2 in Subal underwater housing with two Inon Z-240 underwater strobes, and it’s the same camera I use in the lab or on the surface. I have a lens I really love — Zeiss 21mm, it’s manual focus and not easy to operate underwater, but the result is more than great. Perfect lens for jellies! I also use macro Canon 100mm/f2.8L and Canon MP-E 65mm 1-5x macro, and it’s great too. But I think that I’ll change the system, because recently I tested new Nikon D800e camera, and it’s an absolutely amazing piece of hardware. I really need something like that for my kind of photography.

Of course, I use a flash, because, first, they allow you to shoot with shutter speeds up to 1/200 seconds, which allows you to “freeze” any movement, and second, only with artificial illumination you can see the true colors of objects under water. Because the different colors of the spectrum are lost with increasing depth, starting from 10 to 15 feet, colors become dimmer, and at a depth of 50-65 feet you have only dark blue and grey, or green with brown. But if you will illuminate it, then the true colors appear from seeming nonexistence. The underwater world hides insanely bright colors that can be seen in the photographs — they are absolutely real. And that’s not the most vibrant and crazy combinations that came up with nature.

Are people ever surprised by the variety of creatures you find in Arctic waters?

Yes, they are surprised all the time. It’s not really clear for most people that arctic waters can be much more interesting than any tropical sea!

I have access to another world, a parallel universe, which is very close to us, inhabited by amazing and weird creatures. I have a great chance to share all I see in this hidden world. I’m really proud and happy that I can show it to people. It’s our nature and our planet, so everybody needs to know what it looks like. I think everyone knows what tigers and lions look like, but only a handful ever know about scyphozoan jellies, which can grow up to 3 meters in diameter with 36 meters of tentacles. I’m trying to bring this knowledge to the masses, and it’s much easier to do with the Internet.