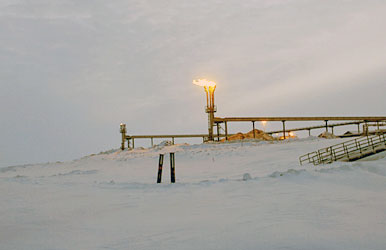 An epic battle dating back decades goes to the Alaska Supreme Court on Wednesday — at a high school no less — with the state and Exxon Mobil Corp. grappling for control of a major oil and gas field, and, some might say, the future of Alaska itself.

The short hearing at Anchorage’s West High School — with both sides allowed 30-minute arguments — centers over the lack of development at Point Thomson, a prized natural gas field that, much to the state’s consternation, has lain fallow since oil was discovered there almost four decades ago.

At stake in the court wrangling is the state’s attempts to revoke Point Thomson leases as well as whether the field’s rich stores of gas ever will be available to help fill the fabled natural gas pipeline state leaders have long dreamed of building. Just as important, the case may determine how much power the state can wield to encourage oil and gas development on its own land, a critical question as oil production in the North Slope’s legacy fields declines.

Lying 50 miles east of Prudhoe Bay, oil was discovered at Point Thomson in 1975. Exploration wells eventually suggested a spectacular hydrocarbon bounty of 8 trillion cubic feet of natural gas and hundreds of millions of barrels of oil and gas liquids.

But unlike the more-accessible crude oil at Prudhoe Bay, Point Thomson offers technically challenging deposits, including hard-to-tap bands of heavy oil and natural gas under extremely high pressure, creating drilling risks and safety issues, according to field operator Exxon Mobil. Plus, there’s no multibillion-dollar gasline to ship the product to market.

The state believes that if Exxon Mobil and partners BP, Chevron and ConocoPhillips think Point Thomson too tough to develop, it’s time to reclaim the leases and find companies that can do the job, said Martin Schultz, supervising attorney for the attorney general’s oil, gas and mining section.

Ninty percent of the state’s unrestricted general fund comes from proceeds from oil, and it needs the ability to develop its resources in a timely way, Schultz said.

Exxon Mobil would not comment on the case, said David Eglinton, a spokesman for the Irving, Tex.-based oil giant.

The dispute has its roots in a 1977 decision by the field’s leaseholders — which included Exxon at the time — to work together and form the Point Thomson Unit. Units are supposed to lead to faster and more efficient production. But under state law, they also give companies a chance to extend their leases — primary terms are five to 10 years — if the state periodically approves development plans.

And the companies, with state approval, extended those leases. In the three decades since the formation of the unit, the state has signed off on 23 development plans.

Over the decades, lots of work has been done at Point Thomson to figure out how to develop the field, Exxon Mobil argues. Some $1.5 billion has been invested to drill more than a dozen wells — mostly in the early days — and do other work such as environmental and engineering studies. In recent years, after the state began its efforts to terminate the unit, Exxon Mobil claims to have drilled two development wells and spent more than $700 million preparing for development.

But despite the assertions of massive spending, the 120,000-acre field still lacks producing wells. The state hopes to change that.

Calling the case “one of the most important resource development disputes in the history of Alaska,” state attorneys begin their written argument to the Supreme Court with a warning from the late Bob Bartlett at the state’s constitutional convention in 1955. He feared a state where producers stalled development for their own purposes, acquiring “great areas of Alaska’s public lands in order NOT to develop them until such time as, in their omnipotence and the pursuance of their own interests, they see fit.”

The state argues that Exxon Mobil over the years has broken promises in the development plans to begin production. Beginning in 2006, under Gov. Frank Murkowski, officials with the Department of Natural Resources finally told the supermajor they were terminating the unit. It was “the culmination of over 30 years of DNR frustration with Lessees’ refusal to commit to produce the millions of barrels of known liquid hydrocarbon reserves,” the state’s written argument says.

But after Exxon Mobil and the other oil companies took the state to Superior Court, Judge Sharon Gleason in 2010 reversed the termination, saying the agency failed to take the proper procedural and due-process steps before the termination. The Supreme Court will hear arguments about those questions at West High School.

In its brief, Exxon Mobil lays out the technical hurdles, noting that development has been uneconomic and that the state confirmed the challenges by repeatedly approving new development plans.

The state Supreme Court, which sometimes hits the road to educate the public, is expected to decide whether the agency took the proper steps and then send the case back to the Superior Court for a final decision on whether the termination is valid, Schultz said.

It could be months before the Supreme Court issues that decision, he added.