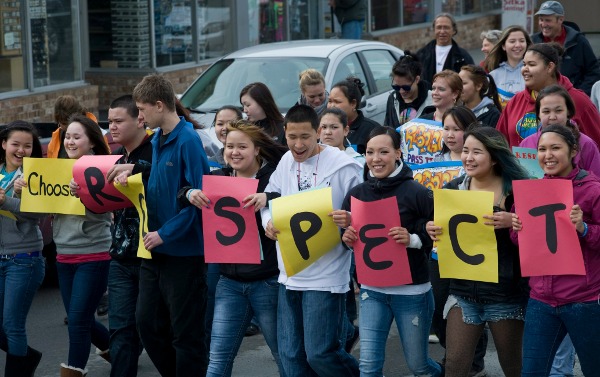 Steubenville is a small Ohio town with a high-profile sex crime that’s spawned a scandal and nationwide discussion. Two boys — local football stars — were convicted this month of raping a 16-year-old girl during a party.

Media coverage of the rape and the trial has now become a national topic, with debate raging over whether some coverage was too sympathetic to the girl’s attackers, who will forever be required to register as sex offenders. The boys, who were sentenced to serve jail time, will be added to the list of 22 other sex offenders already registered in Steubenville, population 18,440.

That the U.S. has a problem with sex crimes is well-illustrated by the growing, national roll of registered sex offenders. There is now one sex offender for about every 450 people in the country.

That might strike some as a startling statistic, but if you live in Alaska, does it really come as a surprise?

Sexual violence is at epidemic levels in the state, particularly in rural Alaska, according to studies written on the subject in the past two decades, and nothing is changing on the edge of a wilderness largely out-of-sight from the rest of America.

Ever-expanding social media might have unmasked the tragedy of sexual assault in Steubenville, but it has yet to reach into the corners of the country’s last frontier. A veil of silence drowns the conversation before it even begins in Alaska. And the epidemic rages on.

Alaska: Rape capital of the US

You’ve heard it before — Alaska is a national leader in domestic violence and sex crimes. The state has often had the highest rate of forcible rape in the country. There is one registered sex offender for every 293 people in the 49th state, and everyone involved in the issue of violence against women agrees the numbers for registered sex offenders underline the lowest measure of what is really going on: For every sex offender convicted and registered, there are untold numbers who go free.

Still, perusing the raw numbers we do have paints a dismal picture. This is especially true in rural Alaska Native villages — communities with no roads connecting them to the world, often few or no police officers, and few or no resources to help victims.

“It’s still really hard for some communities to talk about abuse,” says Pam Karalunas of the Alaska Children’s Alliance, “and, in some cases, children who are willing to disclose have had to leave a community because they’re shamed and blamed and ostracized.”

An Alaska Dispatch analysis of the state’s sex-offender database found that in some villages, one in every 30 men is a registered sex offender. Most are Alaska Native men. A community-by-community search of the 10 largest villages found 84 offenders, of whom all but two listed themselves as Alaska Native.

Native women who live in rural Alaska, many of whom are afraid to talk on the record, say this is a problem for which the men in their communities seem unwilling to take responsibility.

There have been suggestions from some rural Alaska leaders — primarily men — that the epidemic of sexual assault could be stopped if greater law enforcement powers were given to the state’s tribes to crack down on non-tribal members.

Almost every Native village in rural Alaska is considered a “tribe” and receives federal tribal funding. Some use that money to support village tribal courts and law enforcement, though law enforcement in rural Alaska remains lacking. Most villages — about 140 — have no policeman of any sort. They rely on Alaska State Troopers, usually far away, to respond in a crisis. The state funds Village Public Safety Offices, VPSOs as they are called, in just under 100 rural communities.

U.S. Sen. Lisa Murkowski, who is under fire for failing to grant greater police powers to Alaska tribes as part of the Violence Against Women Act (VAWA), has suggested the tribes and state find some way to blend their programs to expand police protection to more villages. Many of these villages have populations that are 80 percent or more Alaska Native.

On Wednesday, Walt Monegan, head of the Alaska Native Justice Center, will moderate a discussion on justice and law enforcement — a topic gaining attention in light of the VAWA uproar. The discussion, “Tribal Courts in Alaska: Past, Present, and Future” runs 7 to 9 p.m. at the UAA/APU Consortium Library in Anchorage. 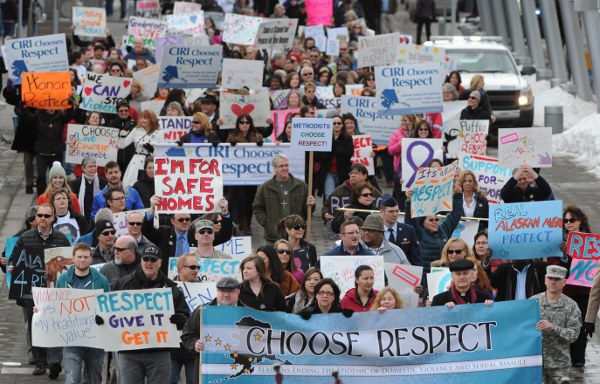 Increased law enforcement might be one answer, but communities could also take matters into their own hands.

Federally recognized tribes have authority to banish tribal members who violate community standards. But Myron Naneng, president of the Association of Village Council Presidents in Bethel, says the power is seldom used. The AVCP represents 56 federally recognized tribes on the Yukon-Kuskowkim Delta. Naneng suggests the power to banish tribal members who engage in violence against women, or other violence, is likely underutilized for two reasons: The tribes are trying work with the state’s legal system and, in some cases, they are fearful.

“They try to leave it up to the state court system,” he said, and they worry that if they order someone out of the village who doesn’t want to go, that act alone might precipitate violence. That is a very real danger when the nearest armed law enforcement — state troopers — is hours or even days away by airplane or snowmachine.

“I think they should just ignore the state and the feds and do it,” Naneng said, but he conceded the risks involved.

Alaska Village Public Safety officers and tribal police in rural Alaska work unarmed. They are in danger if violence escalates.

Thomas Madole, an unarmed VPSO in the village of Manokotak south of Bethel, was shot and killed March 19 while responding to a report of domestic abuse. A pastor from Missouri, Madole moved to Bethel in 2000 to serve at the Bethel Community Assembly of God. He later survived a bout with cancer and told a friend that after that ordeal he felt he had been called by God to “to serve and help the people in the village.”

Though Madole was a white man working in a village that is 85 percent Alaska Native, one resident of Manokotak described him as “a family member, a friend, an adopted uncle, grandpa, and to many, a brother in Christ.” Madole’s death has only focused more attention on the issue of domestic and sexual violence in rural Alaska.

Carol Brown, the AVCP’s legal consultant on tribal justice, says given the political climate of the moment she is doubtful many villages would be willing to talk about local efforts to deal with sexual violence. Kicking troublemakers out of a village is a tactic that’s worked in the past, but she’s unsure who would want to discuss it publicly at the moment.

Sexual assault by the numbers

No one knows how many rapes go unreported in Alaska, especially in rural Alaska where the cloak of silence weighs heavy on women. Despite that, sexual assaults do get prosecuted in rural areas. People are arrested, hauled off to court, convicted and then sent home with the stigma of being a registered sex offender that might well make it impossible for them for them to find work outside the village.

There are so many registered sex offenders in the villages now as to make the city of Anchorage — itself a dangerous place for women — look comparatively free of problems and to leave Steubenville looking relatively unaffected by sexual violence.

In Kwethluk, a village in Western Alaska, there are 348 women. About half of them are under age 18. There are, according to state records, 13 registered sex offenders in the village — one for every 27 women, or one for every 13 girls. Boys are abused in Alaska as well as girls. But the Justice Center at the University of Alaska Anchorage has found that 94 percent of sexual assaults reported to Alaska State Troopers  — the main law enforcement agency policing rural Alaska — involve girls age 15 or under.

These are the most vulnerable of all Alaskans. The risks minors face in Anchorage, while still significant, pale compared to the risks in rural Alaska. Anchorage Police Department statistics show that only 27 percent of sex assault victims that officers help are under the age of 18.

If you take the populations of the 20 largest rural villages in Alaska — places not connected to the Alaska road system — and add them up, they total 15,906 people, just a few less than in Steubenville. Living among these 15,906 people are 184 registered sex offenders, or one for every 86 people.

Per capita, there are nine times as many sex offenders living in rural Alaska as in Steubenville, even counting the two now getting all of the media attention.

Rape is already an under-reported crime. Many women are embarrassed to tell authorities they were raped. Others fear the sort of retaliation from family, friends or acquaintances that came in Steubenville. And too often, if a rape is reported, it’s unlikely to make it into court.

According to U.S. statistics compiled by the Rape, Abuse & Incest National Network, out of every 100 rapes only 46 are reported to authorities and, of those 46, only 12 arrests will be made. Of the 12 arrests, only 9 rapists will face prosecution and, of those 9, only 3 will do time behind bars.

Any allies out there? 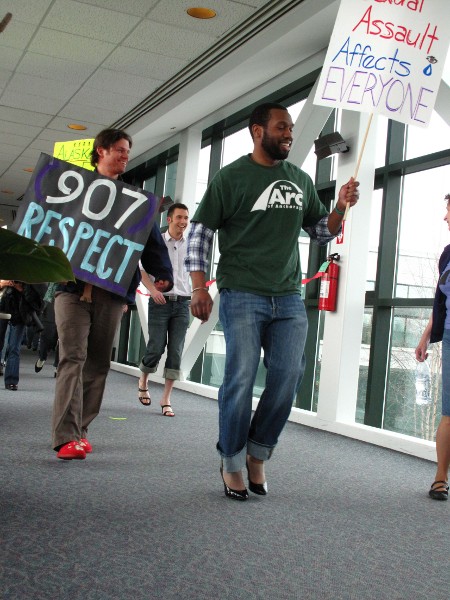 In the case of Steubenville, the rape was reported by a victim who may not have remembered her attack, but graphic images recorded by witnesses to the crime, social media comments and even video confirmed it. The chilling nature of the Steubenville rape along with the initial local reaction, which appeared lackluster, sparked outrage from Internet bystanders and may have encouraged authorities to take the girl’s story more seriously, but maybe not seriously enough in the beginning.

A computer hacker group Knight Sec, an “offshoot” of the association known as Anonymous, took the Steubenville issue to the next level by insisting those responsible come forward or face the “release (of) social security numbers, addresses, and phone numbers … if they don’t issue a public apology before the trial in February.” Knight Sec together with a handful of major and minor news outlets took a stand against the crime by applying pressure to the Steubenville perpetrators.

To affect change, it took public pressure, pushed by Knight Sec and Anonymous, and virtual teamwork from strangers who refused to stand by and accept that the rape and exposure of minor could go unprosecuted.

The sort of outrage expressed over what happened in Steubenville is lacking in Alaska, as Alaska women have repeatedly observed. One noted commentator on rural affairs, Elise Patkotak, is saying the time has come for village men “to stand up for their mothers, sisters, daughters, nieces and grandmothers.”

The Steubenville case illustrates how difficult this can be. In Steubenville, the perpetrators were members of a popular football team. Team dynamics and peer pressure were a factor in what happened there. These elements contributed to the rape itself, and fueled the desires of many to cover it up afterward. The bad thing about a “team” is that you’re either with the team, or you’re on the outs. A team is not unlike a small, isolated community or tribe in that regard.

The victim in Steubenville managed to go against the team only because she lived in a place with social structures in place to protect victims of sexual and domestic violence and, more importantly, because she received the support of an opposing team — a team that was powerful even if largely virtual — that was able to alter the conversation.

Many in Alaska law enforcement say this sort of support simply does not exist for women and children in the villages of rural Alaska. They are largely on their own; isolated from the outside world, lacking the support of law enforcement and crisis shelters, and without allies who can change the conversation.