Over 160 years ago, a large 3-masted sailing ship was in the high Arctic searching for the lost Franklin expedition.

Sir John Franklin and two ships had left England in 1845 to find a fabled Northwest Passage from the Atlantic to the Pacific and the Orient. By 1848, it was decided to send HMS Investigator to look for the expedition. That ship however became ice-bound and was abandoned in 1853 in Mercy Bay at Banks Island.

With a general idea of its location, the government agency Parks Canada set out to find the ship in 2010 and will release a book of photos on the expedition on November 19th.

Ryan Harris is senior marine archeologist with Parks Canada’s Underwater Archeology Service. He was part of the team that found the ship. 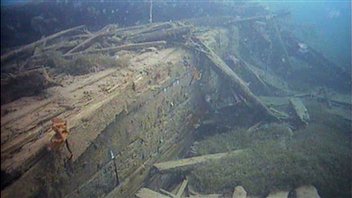 The mystery behind the disappearance of the Franklin expedition and his two ships still lingers. There is still no trace of Franklin’s ships, but the Investigator was known to have been abandoned in an bay 22 km long by 7 km wide, making a search somewhat less of a “needle in a haystack” venture.

And, with the discovery of the HMS Investigator, at least a portion of the Franklin puzzle has been found.

But looking for and diving on a wreck in the high Arctic, is not an easy task. Later this month, Parks Canada will launch a book detailing, the story of the ship, and its finding in text by Andrew Cohen, with the first-ever photos of the shipwreck taken by Parks Canada’s archaeologists following the discovery.

The book is called “Lost Beneath the Ice, the story behind HMS Investigator and its 1850′s tragic mission to rescue the crew of Sir John Franklin’s lost ships.”

Specially prepared for the Arctic, HMS Investigator became frozen in the ice of Mercy Bay where it remained stuck in ice for three years.

Eventually the crew from another Navy ship found the Investigator with its crew suffering from the cold, darkness, starvation, scurvy, boredom, depression and madness.

The Investigator was abandoned and surviving crewmen taken by sledge to the rescue ship.

A year later, a crew from the HMS Resolute visited the site and found the ship still frozen in but in relatively good condition, although they it had apparently taken on some water during a thaw.

Although specially strengthened against ice and snow pressure, it is possible the ship sank simply through the repeated stresses caused by the ice stretching and twisting the hull allowing water to seep in and eventually sink it in place.

The actual finding of the ship in 2010 was a complete surprise.

When they arrived on July 22, the entire bay was still frozen. After getting camp set up, there was a break in the ice on July 25th and the Parks Canada crew decided to perform a test of their underwater scanner in the small section of the bay not frozen. As diver Ryan Harris says, they found it in the first few minutes.

The bay is actually very shallow and the deck is only about 8 metres below the surface.

The masts and upper deck structures have been scrapped off by ice but the wooden hull is otherwise in good condition being preserved by a combination of very cold water and low light due to ice cover most of the year.

There has also been no human activity at the dive site due to the extreme remoteness of the location.

However, in the few years after the ship was abandoned, and its stores off-loaded to a cache on the shore, Inuit did visit and take away highly prized iron bits, such as taking the iron bands from the barrels, and even pulling out nails from the ship and a small boat when they could.

There are no plans to raise the ship which would be prohibitively costly, but future trips may try to recover more artifacts from the interior, currently covered with a thick layer of silt.

With a passion for anything antique with an engine, and for Canadian and world history, Marc comes with a wealth of media experience. After DJ work at private radio in southern Ontario, and with experience in Canadian Forces radio and tv in Europe, the state broadcaster in Austria (Radio 3), and the CBC in Ottawa and Montreal, he was the host of the immensely popular CBC and RCI show, "The Link". He is now part of the new RCI online team producing stories from and about Canada from coast to coast.