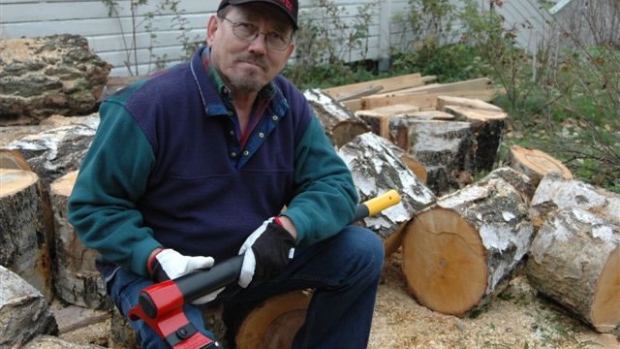 A Finnish woodcutter has designed an axe that could make a significant difference in the lives of some northerners.

Many people in Canada’s Northwest Territories (N.W.T.) and the neighbouring Yukon heat their homes year round with wood.

What makes his axe different?

The design, which has been on the market for eight years in Europe, replaces the traditional straight-edge blade with a curved one.

When the axe head strikes the log, the blade is forced to the right and pulls the wood apart.

Karnä says the axe also adds more torque, so you don’t have to use as much force to get through the wood.

“All the kinetic energy turns to the left and the energy pushes the piece of wood away from the block, and then the axe head stops on top of the block. There’s no way it could continue on to your foot.”

A woodcutter from the age of six, Karnä began hunting for the solution years before he found it.

“Stone Age man created this axe that we get today from the hardware store. It’s still the same tool, with the same difficulties. And so I started to think, why hasn’t anybody developed an axe? And then, why couldn’t I do it?”

Karnä says he got the inspiration when he was moving a stone with an iron bar in his backyard. It didn’t budge until he twisted the bar. “I realized this connection with splitting wood. Very often when you hit the normal axe on the block, nothing happens.”

Karnä says in eight years, he’s not aware of anyone hurting themselves using his axe.

“First time I seen that axe, it’s good,” says Gilbert Koodee, a timber wood cutter in N’dilo, N.W.T., after seeing the axe make quick work of a piece of timber in a video. Koodee spends hours and hours each week chopping wood and selling it to people.

But don’t get too excited about getting one: sales have been so brisk, the company is currently out of stock.