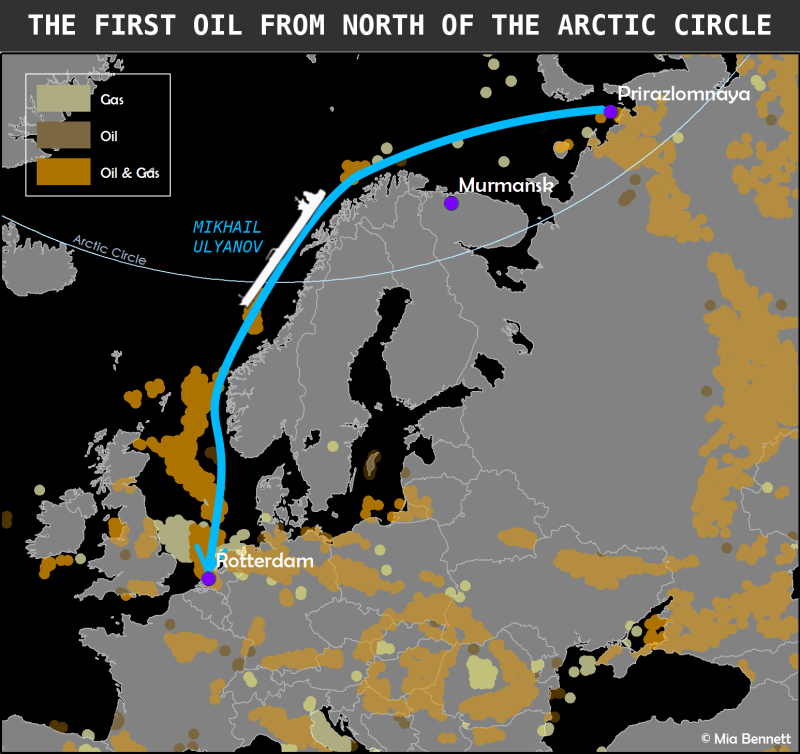 While the media focuses its attention on the vulnerabilities of pipelines that transport natural gas from Russia to Europe, Gazprom has been busy sending the first barrels of oil produced north of the Arctic Circle by ship to Rotterdam.

The Russian company must transport the oil from the Prirazlomnaya rig by ship, as it sits in an offshore field not connected to any pipelines. Shipping the oil by sea conveniently allows Russia to circumvent political hotspots like Ukraine, but it can’t avoid well-equipped, well-funded environmental protestors such as Greenpeace, which owns three ships.

The diffuse nature of oil and gas pipeline networks makes it difficult to pinpoint any particular spot to protest, especially since refineries and depots are often highly secure areas. Yet the maritime transport of hydrocarbons creates two salient and more accessible protest sites: the place of extraction and the place of delivery. Since both locations are usually in or near the water, it is easier for protestors to approach these sites given that they are not fenced off as they might be on land. In the case of Russia’s Prirazlomnaya project, those two sites are the floating oil rig in the Pechora Sea and the port of Rotterdam.

When production at the Prirazlomnaya oil field was ramping up last September, 28 Greenpeace protestors and two journalists arrived on board the non-profit’s ice-strengthened MV Arctic Sunrise to protest. They were able to get close enough to the oil rig to climb onto it, perhaps one reason why Putin is now allowing oil and gas corporations to arm themselves. The Russian Coast Guard quickly arrested the protestors and towed their ship to shore, and they were thrown in jail in Murmansk for three months on charges of piracy and hooliganism. Although the so-called Arctic 30 were released, Greenpeace’s ship remains detained in Murmansk. Yet the seizure of Arctic Sunrise has not spelled the end to Greenpeace’s activities, for the non-profit has another ace up its sleeve: Rainbow Warrior III.

Rainbow Warrior III is Greenpeace’s first custom-built ship, constructed in a shipyard in Gdansk, Poland and delivered in 2011. As soon as Mikhail Ulyanov, a tanker chartered by Gazprom, set sail from the Prirazlomnaya platform on April 18 with 550,000 barrels of Arctic oil, Greenpeace protestors aboard Rainbow Warrior III began tracking it down. The NGO vessel’s captain, Peter Willcox, was one of the protestors detained in Murmansk, yet he was obviously undeterred by his imprisonment. One Greenpeace protestor, Patric Salize, sardonically remarked, “We want to escort the ship into the harbour.”

So on May 1, when Mikhail Ulyanov arrived in Rotterdam, Rainbow Warrior III was there to greet it with a fleet of paragliders and inflatable rafts, too. Greenpeace protestors painted on the side of the Russian tanker, “NO ARCTIC OIL,” and sandwiched themselves between the tanker and the dock to try to stop it from mooring. Dutch authorities promptly arrested 44 protestors, yet most were released after a few hours without charge. The more benign nature of the Dutch police compared to Russian authorities spelled a slightly happier ending to the protest even though Mikhail Ulyanov still managed to dock to begin delivering its Arctic oil for consumption in western Europe.

While Russia requires icebreakers to escort ships transiting the Northern Sea Route, it certainly didn’t ask Greenpeace for its escort services in the North Sea. Be that as it may, the protest-cum-escort still successfully corralled Mikhail Ulyanov in Europe’s largest port. Such unwanted escorts are likely to continue – at least until authorities detain all three of Greenpeace’s ships. Welcome to the new, footlose era of Arctic oil and environmental protest.