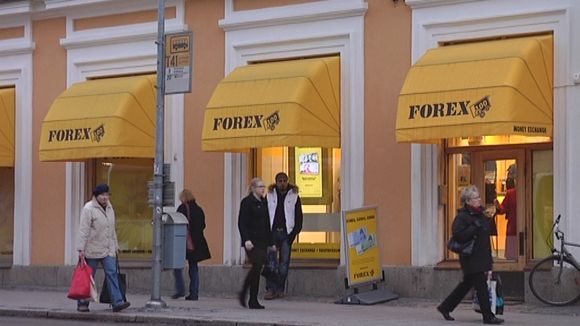 Effects of the Russia rouble’s nosedive will undoubtedly be felt in Finland.

One Finnish expert says the only thing that will save Russia’s economy now would be decisive leadership from President Vladimir Putin. FOREX Finland announced on Tuesday evening that it has stopped buying roubles.

The exchange rate of the Russian rouble has sawed back and forth Wednesday morning, beginning with a five percent drop against the US dollar in the morning, but recovering slightly thereafter once the markets opened in Moscow. The value of the rouble has dropped sharply this week, causing it to lose 15 percent of its value. Over the course of the last year, the rouble has lost over half of its value.

Russia’s Central Bank raised its key interest rate Tuesday night to combat the trend, but it wasn’t enough. Monday the bank announced it was supporting the rouble with an injection of 1.6 billion euros.

Forex Bank Finland has announced it will not be buying Russian currency for the time being from new customers, although it will still exchange currency it has sold in the past to existing customers. The decision was made on Tuesday, effective immediately.

Forex Finland’s director Harri Andersson says the uncertainty is just too great at the moment. For Forex, fluctuations in value that surpass 20 percent are just too much. Roubles will continue to be sold at Forex locations, however, and the bank stresses that the current ban is only temporary. The Finnish news agency STT was the first to report on the Forex decision.

Russian’s economic difficulties will also affect the Finnish economy, says Professor Pekka Sutela, a specialist in the Russian economy at the Lappeenranta University of Technology. The world is now looking to Russia’s leaders to quickly put together a credible plan for moving forward long-term in order to restore market confidence and turn the country’s economy around.

The plummet in the rouble’s value will result in a sharp drop in imports next year, meaning Finnish exports to Russia will also diminish, says Sutela. He says it is clear that this will result in a steep downturn in Finland’s total production.

Sutela says that Russia’s Central Bank has already done all it can to halt the spiral, and is now powerless to do anymore. He says all eyes are now focused on the country’s president: Vladimir Putin.

“The only thing that can be done is try to calm the market. Someone must present a credible, long-term programme to fix the Russian economy,” he says, continuing, “The Russian economy has been too slack and lazy for the past five years.”

As a former advisor to the Bank of Finland, Sutela says Putin must now assume a visible and decisive role in Russia’s economic policy, asserting that there is a strong master of the troubled house.

So far, the financial crisis in Russia has not affected Putin’s popularity among the Russian populace. Most Russians believe the collapse is a direct result of the western-imposed trade embargo. But Putin’s ratings could fall if the crisis continues too long, says Sutela. On the other hand, the series of economic downturns in recent years might mean Russians are becoming accustomed  to fiscal insecurity.

Putin is scheduled to hold a televised speech on Thursday in which he is expected to address the situation.

Soini: No one benefits from a weak Russia

Timo Soini, chair of the parliamentary Foreign Affairs Committee and chair of the opposition Finns Party, was the only Finnish politician to comment on the Russian rouble developments by Wednesday noon. Soini says the effects of the economic situation in Russia are difficult to forecast, but he is concerned.

In Soini’s view, the situation could even be considered dangerous when combined with the Ukrainian crisis and sanctions policy.

“I believe that Russians will now begin hoarding everything that preserves its value better than their currency,” said Soini in a radio interview.

He says finding a solution to the conflict in Ukraine should be paramount.

“The best solution would be to launch real negotiations leading to an attainable peace process. This would release the pressure. No one benefits from fiscal decline and constant one-upmanship,” says Soini.

Canada:  Will Russia’s actions in Ukraine affect relations in the Arctic Council?, Eye on the Arctic