Most of the time our ship is out of range of internet connectivity, so this post will be delivered  to you from the research base Ny Alesund.

My hosts and the station staff were  kind enough to arrange a special little boat and a survival suit for a trip through the dark but fascinating polar night. This is only possible because tonight we are still relatively close, with the ship collecting samples in Kongsfjorden, on the north-west side of Spitsbergen. This is an open fjord with a relatively free connection  to adjacent shelf. It’s 20 km long, between 4 and 10 metres wide and a maximum depth of 400 metres. This means it is largely influenced by both Atlantic water and Arctic water. It also gets a discharge of fresh water and sediments from adjacent glaciers, which we will be looking at more closely in the next few days. It has been an action-packed day today, watching polar marine night researchers in action. Night research during the day sounds odd, but I can assure you it is certainly dark enough –at any time of day. 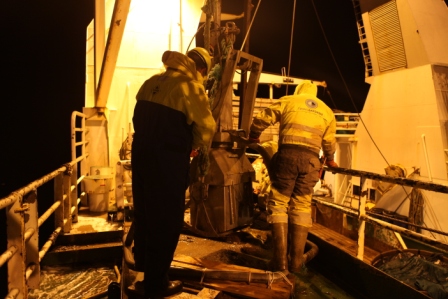 Muddy secrets Sergei Korsun from St. Petersburg university and PhD student Olga Knyazeva were out on deck preparing a box corer, a  big box-shaped instrument to go down to the seabed and bring up samples of sediment. The teamwork between scientists and crew seems to work brilliantly. The crew operate the lifting and lowering equipment and all sorts of other gear. The scientists collect their samples from it and take them in to the ship’s lab.

“Just a load of mud”, quips Sergei, and there is certainly plenty of it sploshing about in the course of the operation. No wonder there are no outdoor shoes allowed inside.

Olga drains off the water so that only the sediment is left. These two are interested in foraminifera or forams, one-celled organisms. Ice Blog readers may remember I discussed them here some time ago, in connection with research on ocean acidification. German scientists actually wrote a children’s story with Tessi and Tipo, two of these tiny ocean creatures, as the main characters. The focus there was on how increasingly acid seas are dissolving the protective shells of many organisms, especially in cold, Arctic water, where the process is faster. Every creature counts! So why should we be interested in these forams in particular? No question about it, says Olga. There are so many of them, they account for a huge proportion of biomass and we know far too little about what they are up to in the winter. Given their important role in the ecosystem, what they do in winter is something we really ought to know. The season of winter is just too long to be ignored any longer, says Olga. And ultimately, even the tiniest creatures play a role in the global foodweb.  Sergei mentions another reason why climatologists and those interested in the history of the planet are so interested in these tiny creatures. They fossilize, so that scientists can use samples from the seafloor to get a record of earth’s history that goes back a very long way.

Inner clocks without daylight? Shortly afterwards, I joined  Sören and Lukas from Germany’s Alfred-Wegener  Institute  for one of their  four-hourly net-dropping exercises. For  this, a big hatch is opened on the laboratory deck. This brought added excitement as  there were a lot of beautifully shaped chunks of ice just floating past. Iceblogger’s delight!

We could also see the hills in silhouette in the background. Clearly there are indeed many shades of “dark”. Seagulls are following us constantly. No doubt they know fish and shrimps are being caught and are always on the lookout for an easy, tasty morsel. In this climate, I don’t blame them. And it is kind of reassuring to have their company, bright in the ship’s lights against the dark sky and sea. The wind felt icy, but the experts up here tell us it is actually relatively mild. Anyway, our two scientists dropped a longish thin net attached to a sort of circular hoop out the hatch, sampling the water.

When it came in, they take samples of small jellyfish, copepods and krill, for a fascinating project to find out about the “biological clock gene”. How can some marine organisms migrate vertically in a 24-25 hour cycle, without light to trigger this?  More about that when I’ve interviewed the experts over the next couple of days.

The advantages of winter If you have been waiting for the answer to the question about reproduction in the last blog, I won’t keep you in suspense any longer. Given that the reason is unlikely to be an ideal food supply for the “babies”, some of the scientists on board think the reason could be that there fewer predators about to eat the young, if they arrive in winter. Does that seem plausible? The next post may be a day or two in arriving, as the ship will be out of range from tomorrow onwards. But I promise plenty more to come as soon as we are back in internet range. (How on earth did we live without it?!)