They left their home community of Cambridge Bay in Canada’s High Arctic just as the sun came up. It’s late afternoon now. They’ve travelled almost 70 km across the rocky island terrain, criss-crossing back and forth across the ice-covered Ekalluktok Lake looking for muskoxen, an animal they rely on for everything from food to employment as big game hunting guides.

Finally, Amegainek, 42, sees something.  Hoove prints. He hops off his snowmobile. But close inspection shows the prints filled with snow. The animals are long since gone. Probably one or two days ago.

Moving on to the next location, the hunters run their snowmobiles and supply-laden sleds, known as komatiks,  up an embankment, rock-ribbed and rough with ice. Stopping on top, they take out their binoculars, glassing the horizon for the animals.

Roland Emingak shakes his head and lets the binoculars fall back onto his chest.

Still nothing in sight.

But later on that afternoon, far, far in the distance, they notice a handful of clouds slowly swallowing up the line between the bright blue sky and ice-covered ground, blurring the horizon.

Time to head back to the community and try again tomorrow.

Hunting for muskoxen wasn’t always like this, community members say.

“If you go back twenty years ago, just outside the community, (it) would be roaming with a lot of muskoxen,” Amegainek said later on in the week from the home he shares with his father David.

“Now we travel, I don’t know, sometimes a couple of hundred miles before we see a muskox.”

“It makes me nervous.”

The importance of muskoxen

Cambridge Bay, the village where Amegainek, Angohiatok and Emingak live, is a predominantly Inuit community of approximately 1600 people on Victoria Island in Canada’s Arctic archipelago.

You don’t have to walk around much to realize how important muskoxen are to the people here, culturally, economically and as a food source.

Harvested muskox lie in the snow outside hunters’ homes.

Muskox pelts are stretched on boards around the community so the skin can be used for leather.

And in the parking lot of the local hotel,  members of Cambridge Bay’s hunters and trappers organization, employed by the local outfitter, pick up sport hunters, an important source of employment in this remote region of the world with few educational and employment opportunities. 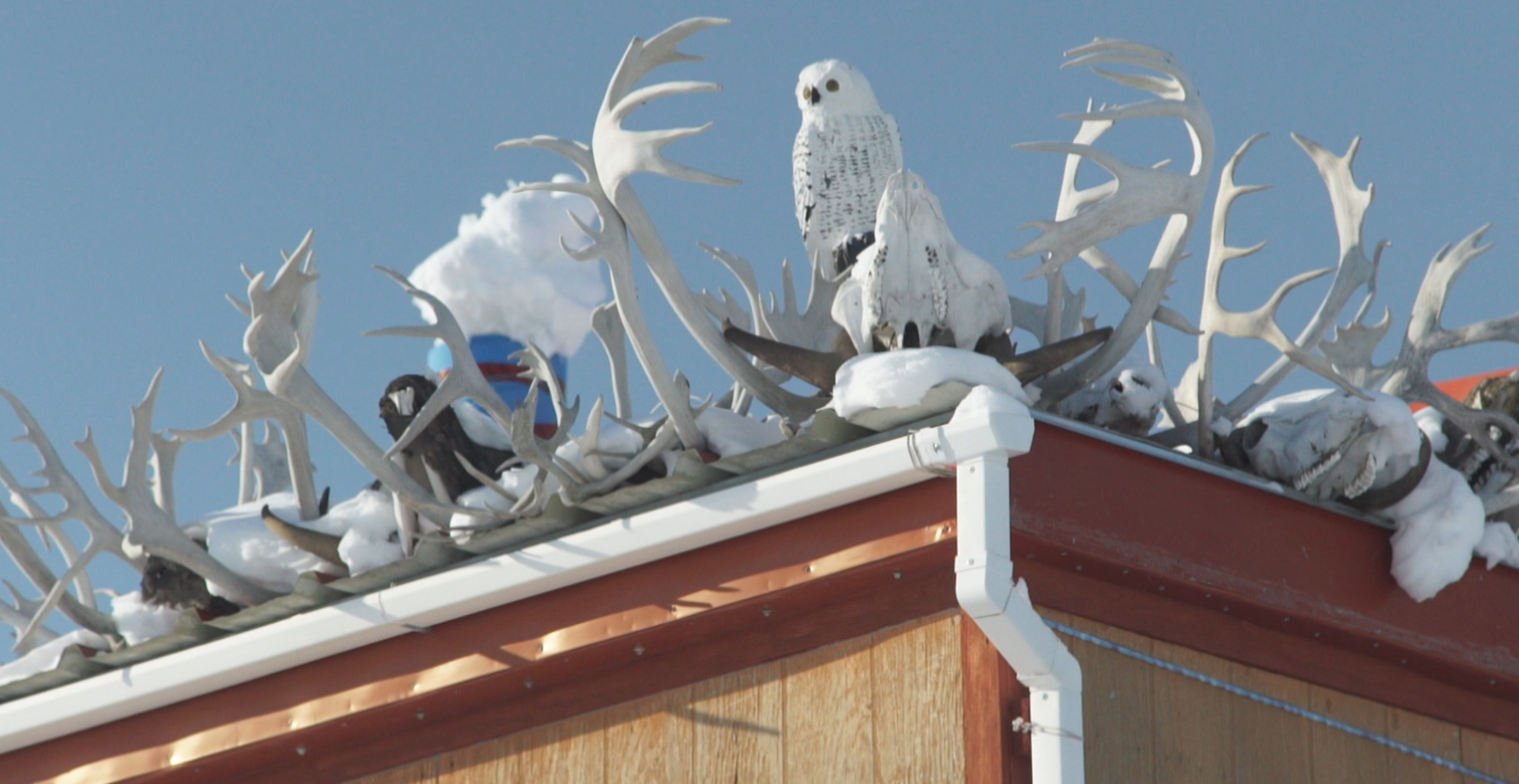 A rooftop in Cambridge Bay, Nunavut. The importance of hunting culture is everywhere you look in this community. (Eye on the Arctic) 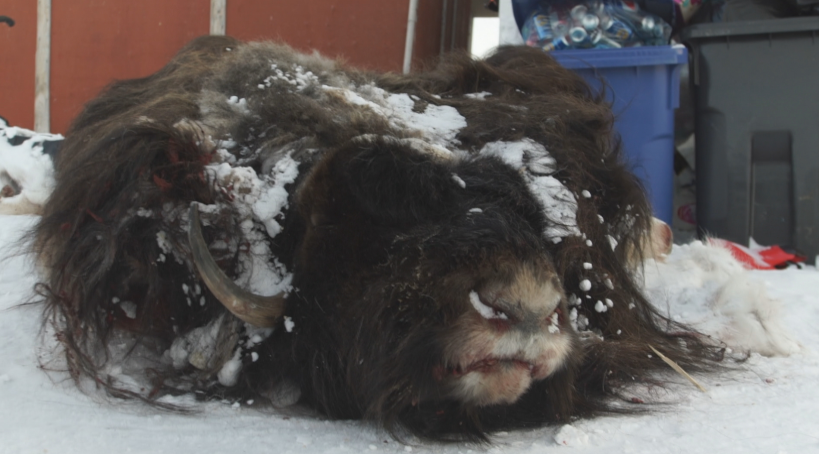 A file photo of a harvested muskox, preserved by the cold, in front of hunters’ houses in Cambridge Bay, Nunavut. (Eye on the Arctic) 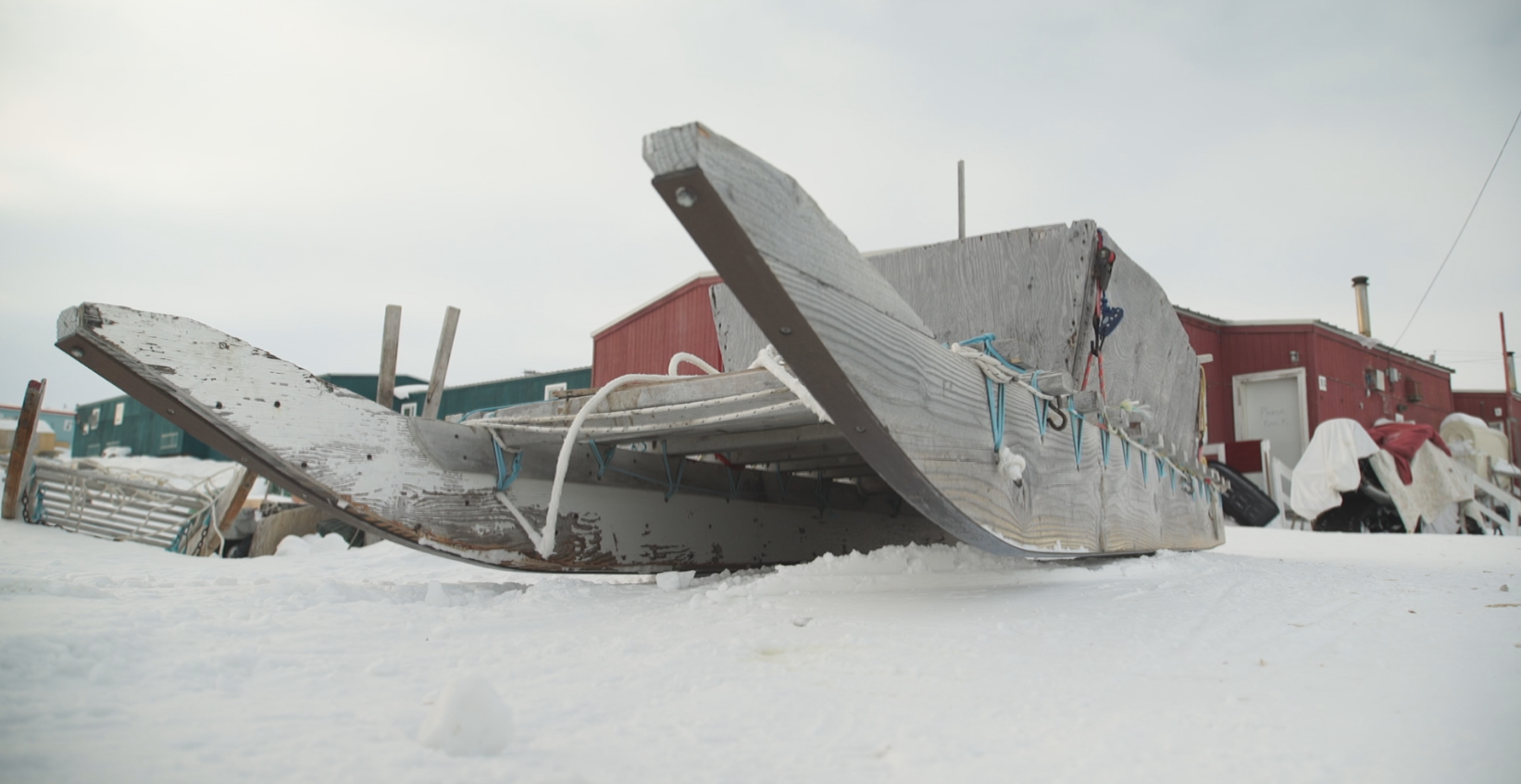 A komatik (an Inuit sled) used for transportation when hunters go out on the land. (Eye on the Arctic) 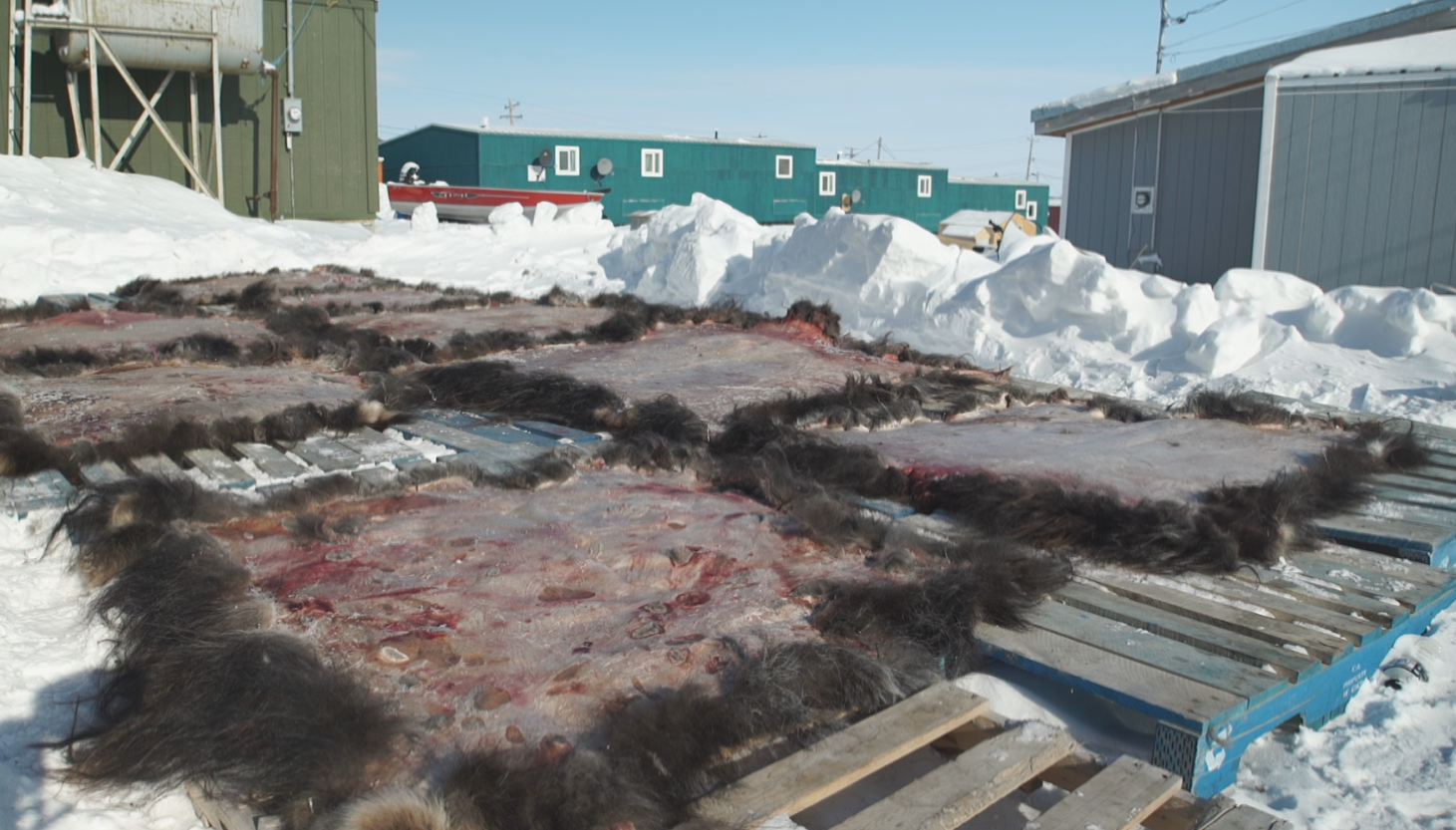 Muskox skins drying on boards in Cambridge Bay, Nunavut. (Eye on the Arctic) 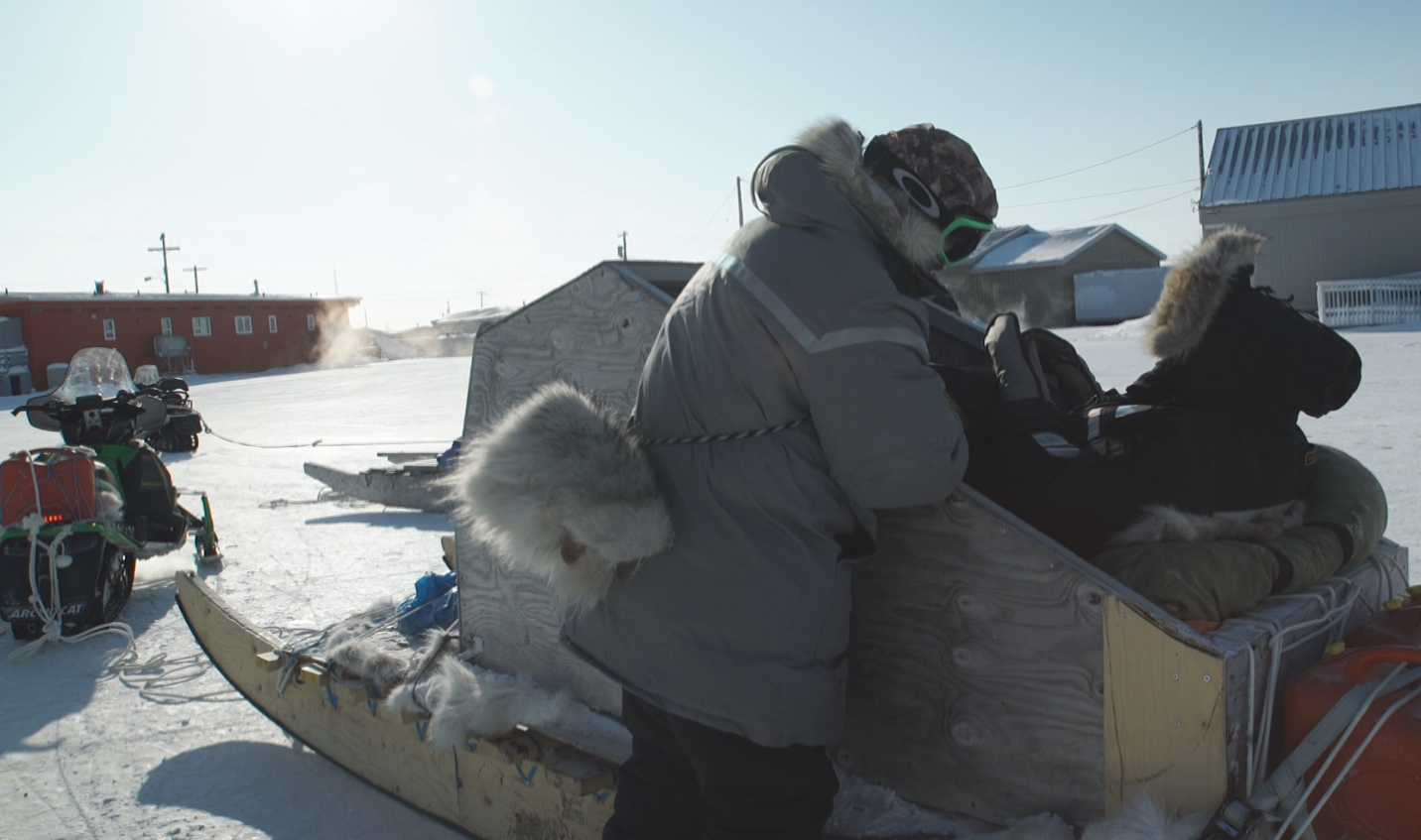 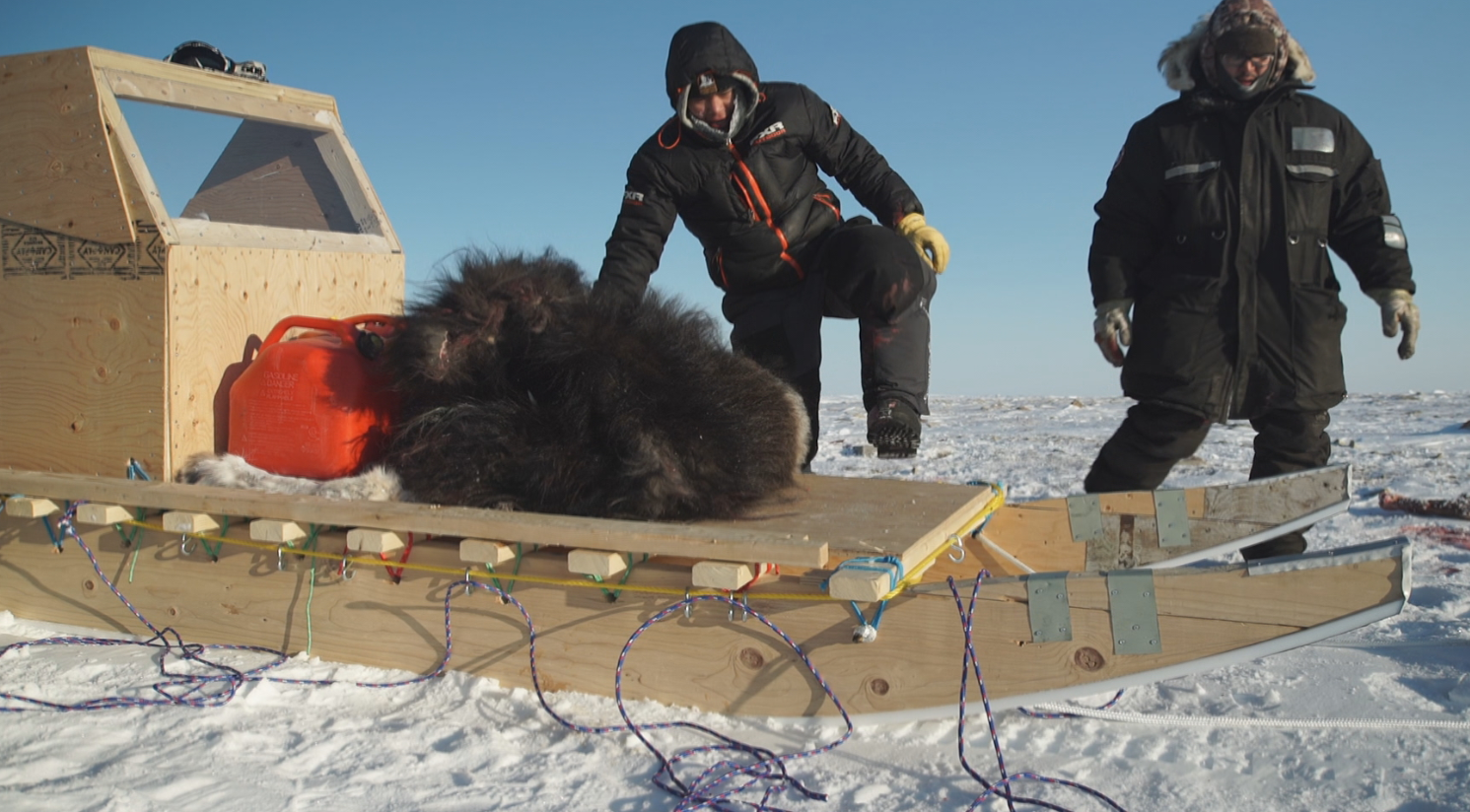 Hunters out on the land in the southeast portion of Victoria Island, Nunavut prepare to bring a muskox skin back to the community of Cambridge Bay. (Eye on the Arctic)

But hunters are noticing changes in their muskoxen.

Not only do they seem to be moving further away from the community, but when the hunters do find them, they’re often sick. Sometimes so sick that the meat can’t be consumed.

And in a part of Canada where food costs are at least twice as expensive as the national average, the ripple effect of these changes are already being felt.

The next day, Amegainek, Angohiatok and Emingak head out again. They leave the community at 8am. It’s especially hard to today: -42 with bracing winds. So cold, that during rest stops, a frozen crust forms on the tea just seconds after it’s poured from the thermos.

But now the work is just beginning. The men use their komatiks to block the frigid winds as they prepare the animal to bring back to the community. But as the hunters start butchering it, they notice almost immediately that something is wrong. The lack of fat already has them concerned.

“We should leave the meat here,” he says.

Colin Amegainek nods his head besides him. But they continue working on the animal, they need to make sure.

Today the men are also taking samples with scientists, and the more they work on the animal, the more worrying things they see: cysts, infection, sticky intestines.

But eventually, it’s all too clear. There’s too much wrong with the animal.

No meat to bring back to the community today.

“It’s a big waste,” Amegainek said when asked about the hunt later on that week.

Before, he’d only come upon one or two sick muskoxen a year, he says.

“It’s starting to become a normal thing to see diseases,” he says. “(It’s) every other time I go out.”

The cultural and economic implications of this are being felt by hunters throughout the community.

“We don’t get as much meat for the winter,” says Julia Ogina, a subsistence hunter in Cambridge Bay and a project coordinator at the Kitikmeot Inuit Association that represents Inuit in western Nunavut.

“Even to go and find the animals we have to go more than once, it’s multiple times,” she says

“Both my husband and I work, so we got hunting on the weekends. And if we don’t get anything we have to go back the next weekend and the next.”

Even more difficult is after days of hunting, finding an animal, and then seeing the meat is too diseased for consumption.

“You wonder how bad is it going to get.”

Canada is home to the world’s largest muskox population but there are no exact estimates available.

The International Union for Conservation of Nature  lists muskoxen numbers at approximately 121,000 in Canada.   However, the declining island population and recent muskox die-offs in the Arctic archipelago further complicate the picture.

Nobody is sure why the muskox seem to be getting sicker.

But three things have gotten scientists attention in recent years: lungworm, a parasite; erysipelothrix rhusiopathiae, a bacteria; and orf, related to a virus found in domestic sheep and goats.

Now the next step is to see what role climate change is playing in their proliferation on the island. 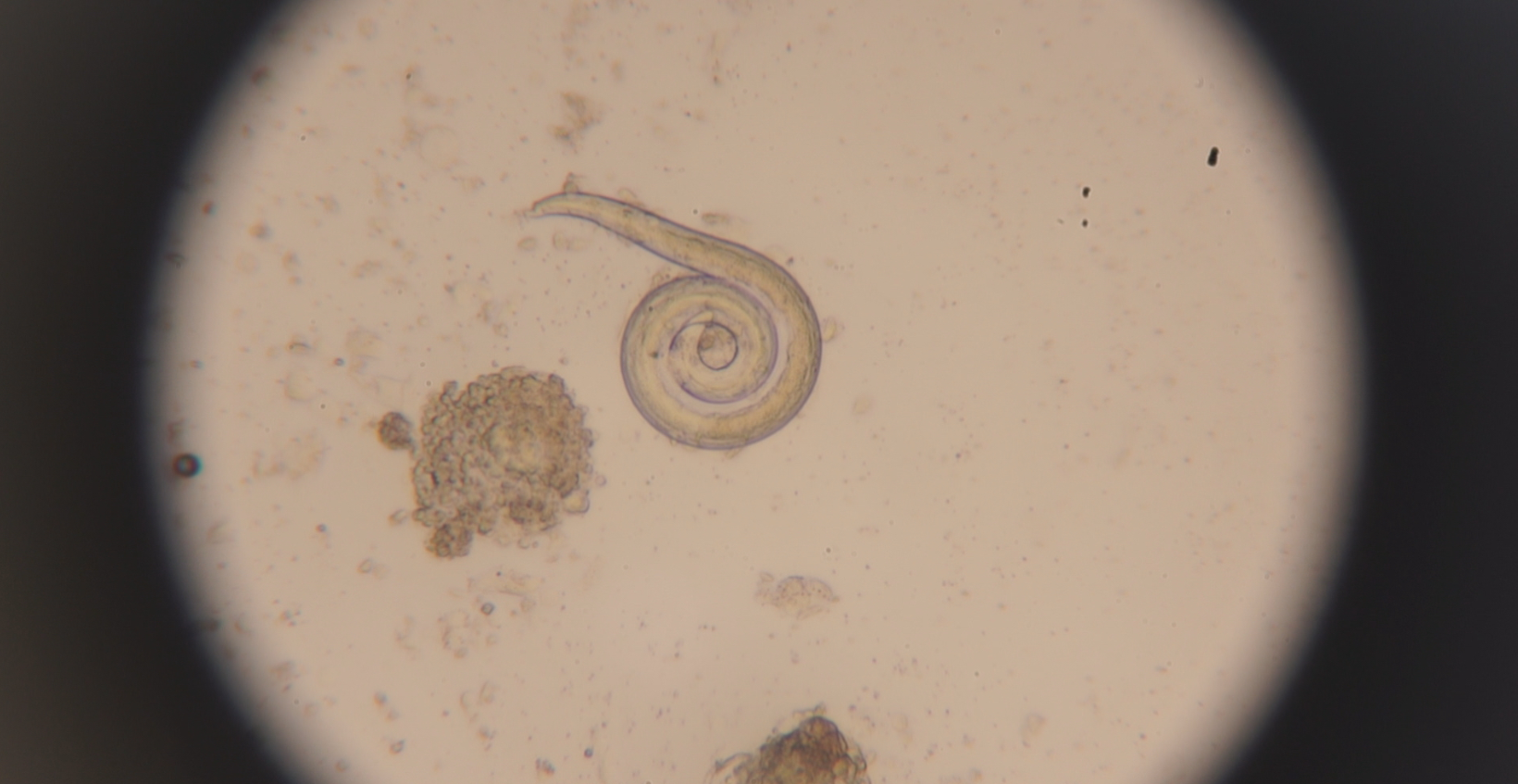 The lungworm. Before it was too cold for the worm to complete its life cycle in Canada’s Arctic archipelago. Now, warming temperatures have allowed it to make its way two-thirds of the way up Victoria Island. (Eye on the Arctic) 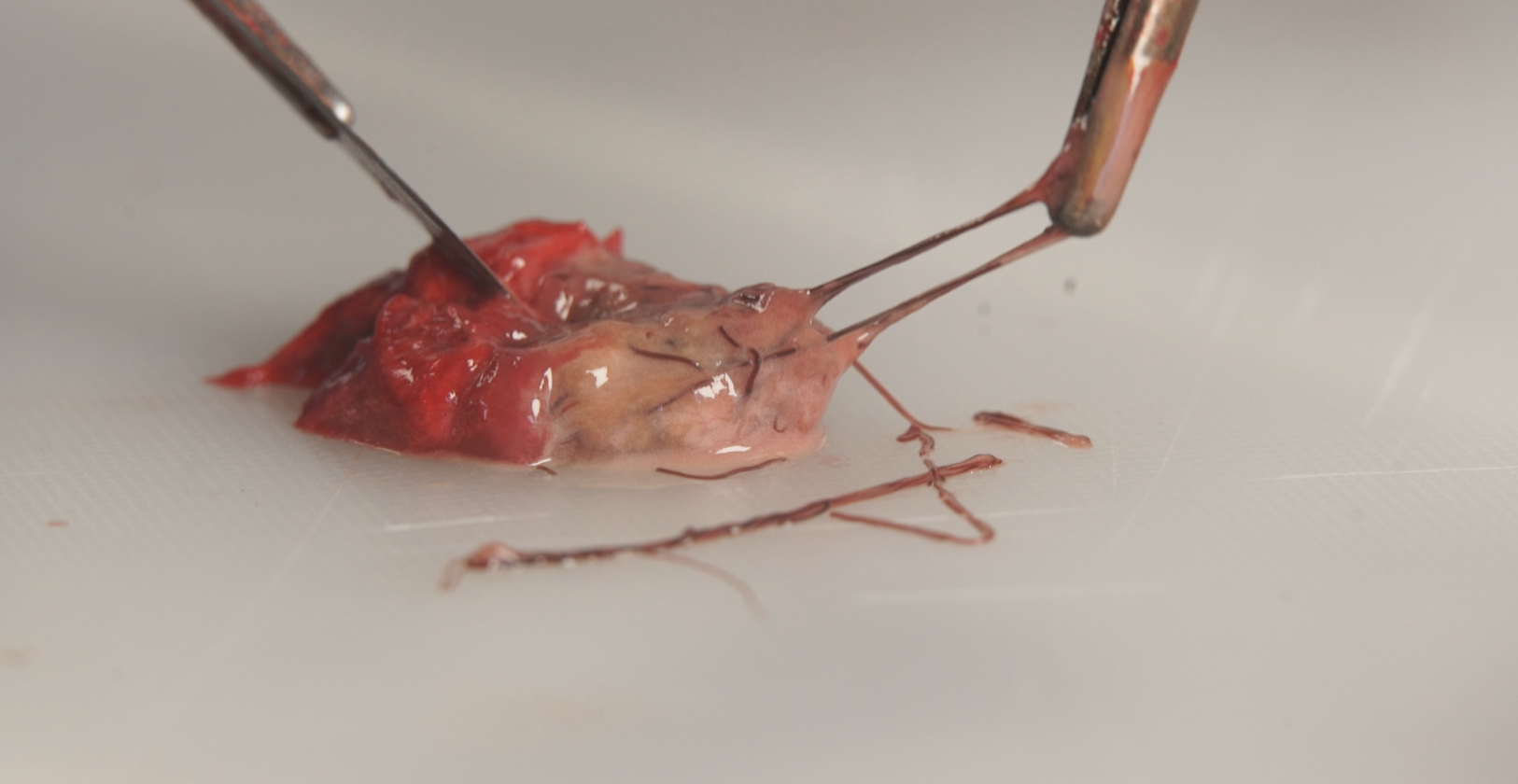 Lungworm is a natural parasite of muskoxen, but when it is able to complete its lifecycle, it can make the muskox sick, causing it to bleed through the nose when it runs. (Eye on the Arctic) 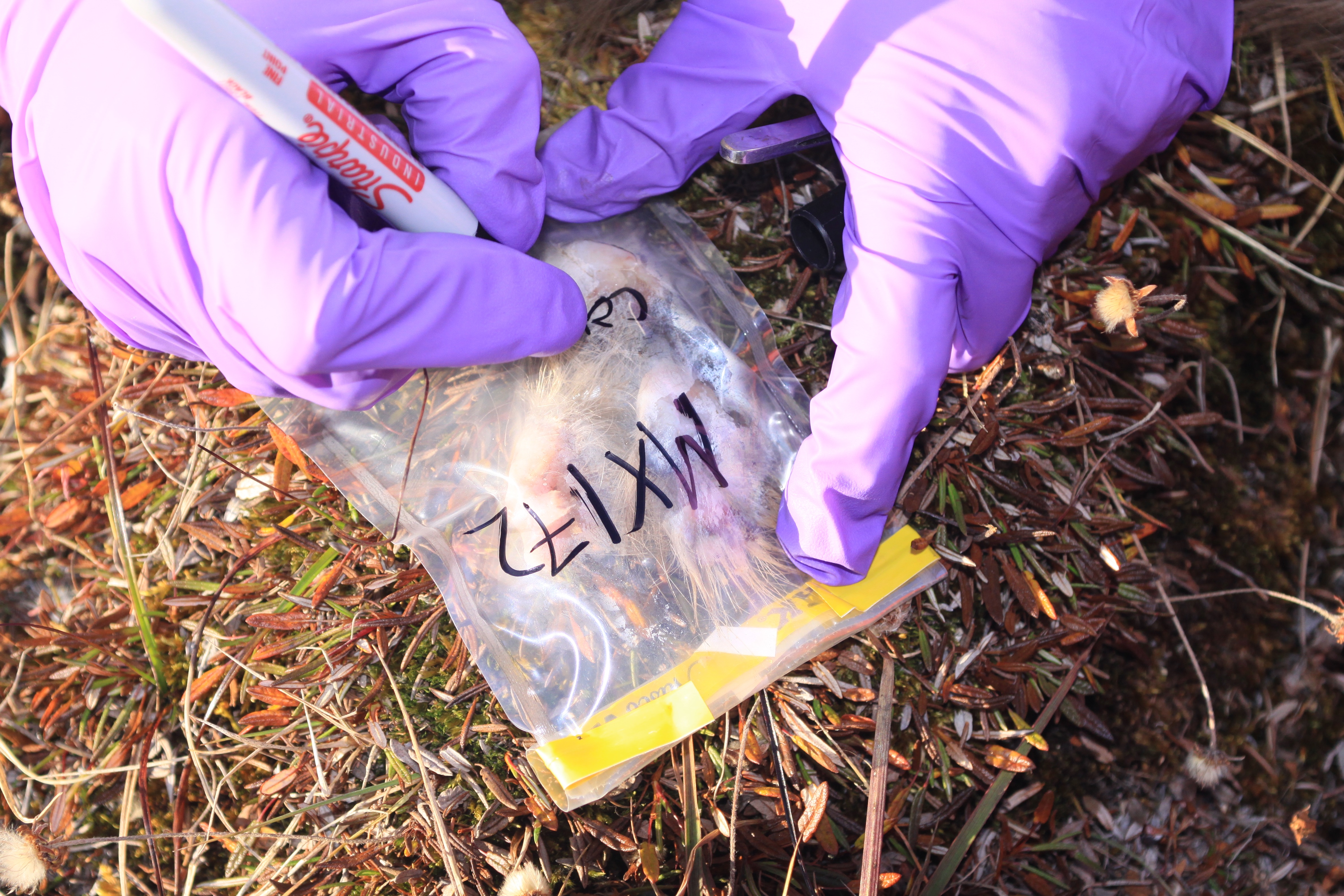 Scientists collecting a field sample near Washburn Lake on Victoria Island to test for orf virus. Scientists are researching the origin of the virus and its impact on muskox populations. Orf virus can be transmitted to humans through direct contact with infected material. (Courtesy Matilde Tomaselli) 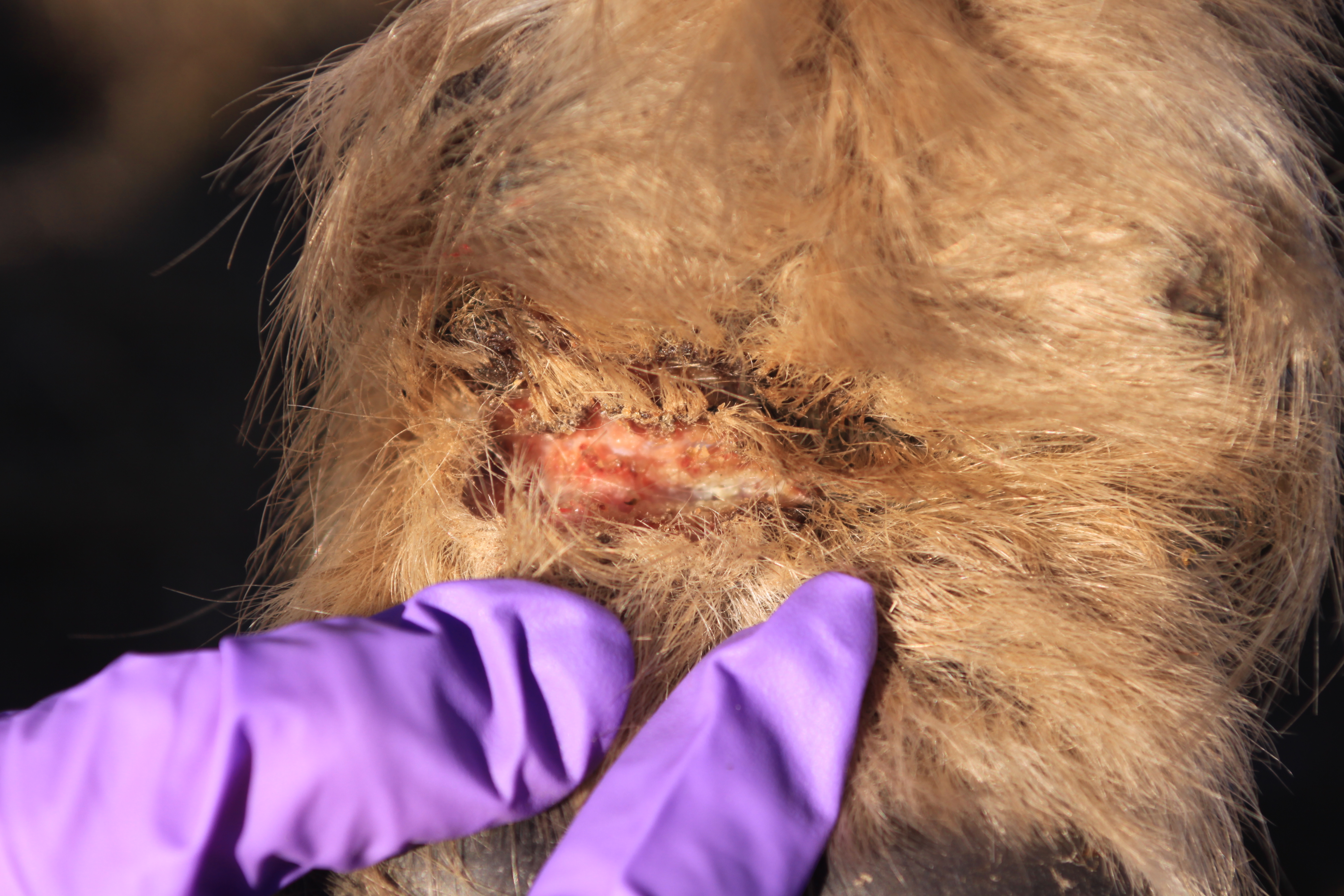 A scabby lesion is found above a muskox hoof after it’s been harvested on Victoria Island. It later tested positive for orf virus. Increasing numbers of muskoxen are being found with tell-tale scabs on the nose, mouth, and near the hooves suggestive of orf virus infection (Courtesy Matilde Tomaselli) 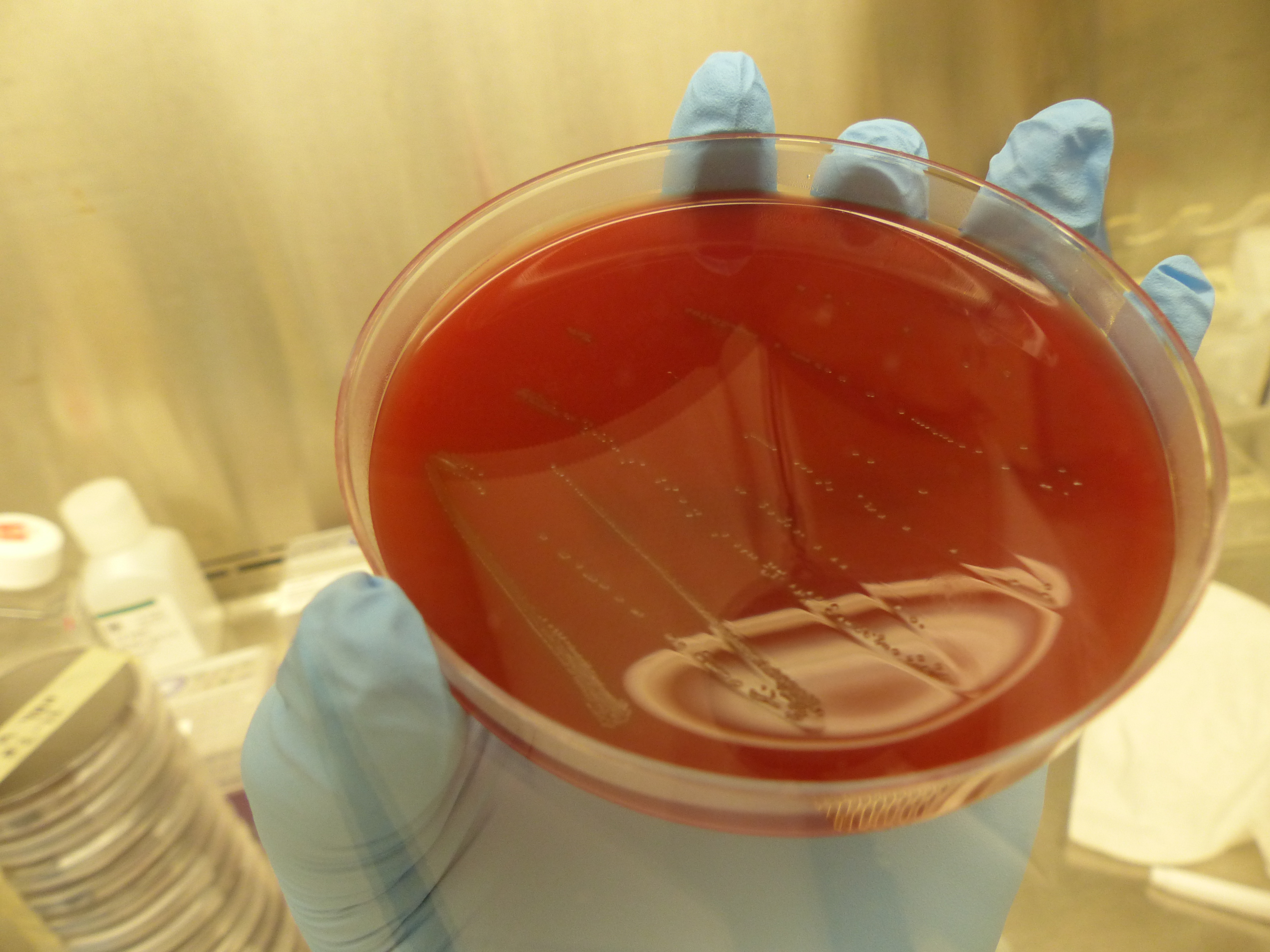 Erysipelothrix rhusiopathiae in a petri dish. This bacteria was responsible for a number of muskox deaths on Victoria and Banks Islands between 2009 and 2013. The bacteria can infect humans.. (Courtesy Taya Forde)

The Arctic is warming twice has fast as other regions of the world.

Is climate somehow allowing these illnesses to arrive on Victoria Island? Or is the warming Arctic making the muskoxen more susceptible to illness?

“There’s a number of things going on and it’s not just one factor,” says Susan Kutz, a professor of veterinary sciences at Canada’s University of Calgary, who has spent the last 20 years studying the effects of climate change on Arctic animals.

“The climate in the Arctic archipelago has been a lot warmer in the last few decades. If you’re a muskox adapted to a cold dry arctic environment and all of the sudden the temperatures are going up to 20 to 30 degrees…

“We can speculate at this point that that’s one of the things that’s stressing them and making them more susceptible to other diseases.”

What will it mean for the younger generation?

“The knowledge that I gained as a child, is not the  same amount of knowledge as our young people today can get,” hunter Julia Ogina says.

“Because if we do get out on the weekend, are the muskox there? If we’re lucky, which is most of the time not now, so they’re lucky if they get to see an animal.

“You wonder how bad is it going to get. When are the answers coming and what can we do about it?”

Hunter Colin Amegainek agrees and says he hopes there’s a way for more research to be done on animal health in the Arctic to help slow the rapid changes Inuit are seeing.

“I think the rest of Canada needs to know about what our situation is,” he says.

“ ‘Cause I want the muskoxen to be around for our younger generation.”

Denmark: Reinstilling pride in the Inuit seal hunt, Eye on the Arctic

Greenland:  The changing sea ice & what it means for Inuit, Eye on the Arctic

Iceland:  Feature Interview – Hunting culture under stress in Arctic, Eye on the Arctic

Russia: Anthrax outbreak in Arctic Russia could be just the beginning: scientist, The Independent Barents Observer