The mysteries of the fishes that live in the Canadian Arctic are unravelled in a new book that provides a baseline that will help understand how they are affected by climate change.

The book was co-edited by scientists from the Canadian Museum of Nature and the government department Fisheries and Oceans Canada.

“Starting with our first curator of fishes, Don McAllister, (he) started in 1958 and, unlike other ichthyologists (fish scientists) of his time, looked to the north and started collecting,”  says Noel Alfonso, a researcher at the Canadian Museum of Nature. “He would go up there. He scuba dived, he piloted research vessels and he built up tremendous collections of Arctic fishes.”

Noel Alfonso, researcher at the Canadian Museum of Nature, on publishing the book.

Indigenous knowledge was included in the book through consultations in Arctic communities and with Inuit who are employed in many of the government’s fisheries stations and offices in the North.

There are photos, drawings, extensive scientific information, descriptions of cultural importance and maps that show the range of each of 221 species of fish found in the Canadian Arctic. Their names are listed in English, French, Inuktituk (language of the indigenous Inuit people) and Greenlandic or Danish.

Among the fishes described is the Arctic cod found all through the Canadian and the larger Arctic.

“It is the most important species there because it exists in vast numbers…in a unique environment…which is under the ice,” says Alfonso.

“They feed on zooplankton and phytoplankton that grows under the ice and everything in the Arctic eats Arctic cod either directly or indirectly—narwhals, Greenland halibut, seals. Polar bears eat them indirectly when they’re eating seals.

Arctic fish are harvested in small numbers and eaten by people in Arctic communities. Sixteen Arctic nations signed an agreement in December 2017 to prohibit large-scale commercial fishing for at least 16 years. I asked Alfonso whether he is confident the fishes will be protected as the climate changes, ice melts and it becomes easier for ships to come through.

“For now, yes. But we have to keep international agreements strong and we need to do more monitoring in the Arctic.” 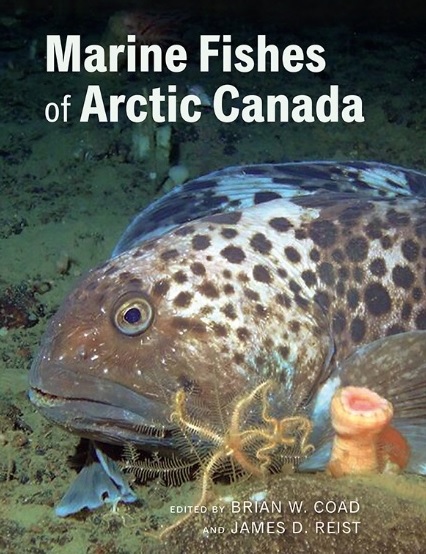 The 600-page Marine Fishes of Arctic Canada is published by the University of Toronto Press.

Born and raised in Montreal, Quebec, Lynn has dedicated her working life to journalism. After decades in the field, she still believes journalism to be a pillar of democracy and she remains committed to telling stories she believes are important or interesting. Lynn loves Canada and embraces all seasons: skiing, skating, and sledding in winter, hiking, swimming and playing tennis in summer and running all the time. She is a voracious consumer of Canadian literature, public radio programs and classical music. Family and friends are most important. Good and unusual foods are fun. She travels when possible and enjoys the wilderness.