Thousands of years ago on Russia’s Kola Peninsula, retreating glaciers shaved off the pointy peaks of the Khibiny Mountains. The shrinking ice cap left behind a landscape of granite pancakes that were still dusted in sugar-white snow when I visited the region at the beginning of June. Fortunately, it was still too cold for the dreaded, buzzing swarms of mosquitoes to burst out of the puddles of melting snow, so a silent stillness hung in the air.

If this had been Norway or Iceland, that peaceful quietude would have lingered until a sharp, salty gust of ocean wind, the screech of a gull, or the joyous shrieks of a few drunk adolescents stumbling in the midnight sunshine pierced the air. But this was not Scandinavia. This was industrialized northwest Russia, and as I lay in my bed, the sound of a train shuddering and screeching under the enormous weight of its mineral ore blasted through the bright night.

Like Russia, the Nordic nations are major mining countries. But Sweden, Finland, and Norway largely manage to keep their facilities that produce unsightly commodities like iron and coal away from the public gaze. This stricter division between industry and nature preserves the illusion of an untouched boreal forest spanning the top of Scandinavia.

In northwest Russia, in contrast – one of the most polluted regions in the former Soviet Union, and also one of the most densely populated regions in the entire Arctic – things are mostly done out in the open. This is ironic in a country long known for its secrecy. Russia may still have its closed cities in deepest Siberia like Norilsk and Dudinka, where the worst of the extractive industry’s environmental offenses are hidden. But in the many small mining towns of the Kola Peninsula, the destruction wreaked by mining is in plain sight.

More than just shades of grey

Around the town of Kirovsk, smokestacks eject plumes that rise lazily up to meet the clouds. Inexplicably large piles of broken concrete lie in the middle of thickets of dwarf shrubs and wildflowers. It is unclear if the rubble has been there for one month or half a century. Instead of a shoreline, a large, silver pipeline wraps around the mirror-like lake.

It’s the sort of setting that cries out for an Arctic sequel to Mad Max to be filmed on location, with ready-made scenes of an alternative experiment with industrial development gone horribly wrong. (Kirovsk, in fact, has long been known as “Arctic Hollywood,” with both Soviet movies and more recently, the Oscar-winning Russian film Leviathan filmed here.)

Yet despite the destruction of the natural surroundings, a study published in 2003 found that while the Kola Peninsula’s residents are “fully cognizant of their economic troubles,” they have more “varying states of awareness about their local environment.”

The story could end here with the typical narrative of post-Soviet Russia as a place beset by plummeting lifespans and mass deaths by moonshine. But perhaps what is more intriguing about contemporary Russia is not its depressing statistics, but rather how the country contains two parallel universes: one on the outside, and one on the inside.

The outside is the view most visitors would take in from the street or bus window. Here, Russia’s built environment tends to look decrepit and depressing. This gives rise to thousands of headlines about the country that make use of the word “crumbling.”

But on the inside, once you go behind the double doors of the Soviet skeletons of concrete apartment buildings, hotels, and restaurants, a much warmer world opens up where the palette extends riotously beyond gray and brown and where it often doesn’t feel like time stopped in 1991.

Indoors, a kaleidescope of colors

In Apatity, a typically gray building with a Soviet mural showcasing miners and the periodic table names of every mineral produced by the local mines – copper, iron, zinc, lead, nickel, aluminum, and titanium, housed a grocery store with as many choices as a typical shop in America, and not only in the booze aisle. Fresh fruits and vegetables, all sorts of freshly baked breads and pastries, smoked fish, teas, and candies in eye-popping metallic wrappings burst from the shelves. A cozy café at the back served up cappuccinos, cottage-cheese pancakes, more baked goods, and, naturally, vodka. Upon touring a Texan supermarket in 1989, Boris Yeltsin remarked that if Russians were to see the well-stocked aisles, “there would be a revolution.” Given the healthy state of Russian grocery stores today, that moment has now passed.

A five minute walk down a dirt road behind the Kola Science Center of the Russian Academy of Sciences led to a new restaurant and café filled with books and hipster. Two blond, bearded baristas serving espresso drinks would not have been out of place in Portland or Williamsburg. On the inside in much of Russia, time has actually not stood still.

There were exceptions to this, of course. One night at a restaurant where we had dinner, we shared the space with a wedding banquet. The melodramatic live music, huge hairdos, and heavy eyeliner were straight out of 1984.

Meanwhile at the Khibiny Educational and Scientific Station, where we stayed for two nights, peeling wall paint was the least of the maintenance issues. Built in 1948, the station doesn’t look like it’s undergone much of a remodel since then, though there surprisingly was free wifi. A Norwegian student in our group, likely used to the flawless facilities her country provides, began documenting the many holes in the wall on her phone with a plan to advocate for better conditions for the Russian students who live there for months at a time during their research stints. Like the rest of us, she was also frustrated that the students didn’t have access to the banya on site, a toasty, extremely humid wood-heated Russian version of the Finnish sauna, while we did.

When the outside has no inside

If Russia contains two universes – outside and inside – then it is the instances when the outside actually has no inside that the follies of Soviet development are laid bare for all to see.

Kirovsk’s abandoned train station is a clear testament to the hollow promises of modernity. A number of urban legends surround the station, which opened in 1939: that it was built in honor of Stalin, who was the first and last passenger (not true) and that it was built in honor of the World Congress of Miners, which never actually took place (I wasn’t able to verify this one).

Undoubtedly, however, the station did serve a real purpose for the common man until the 1990s. Trains departed from Kirovsk at least twice a day for nearby Apatity, where it was possible to transfer to Leningrad. While the Kirovsk station is now defunct, it’s still possible to go by train from Apatity to St. Petersburg, a journey that takes about 25 hours.

In the station’s better years, a replica of an immense painting capturing the terrifying and beautiful power of the ocean, The Ninth Wave, by Ivan Aivazovsky, graced the main lobby. Now, one has to travel to the State Russian Museum in St. Petersburg to see the masterpiece. The station suffered a fire soon after it closed in the 1990s, and the only decorations remaining inside are a crumbled relief of Lenin flanked by Mondrian-esque graffiti, all reds and blues and right angles.

Weirdly, the constant sound of rumbling trains still fills the air, but none of them stops at the station for passengers. The open-top carriages shuttle ore from the mine to the processing plant. While there were radical cutbacks to people’s mobility in the years after the collapse of the Soviet Union, the oil and minerals continue to freely flow across the country’s landmass.

And unlike under communism, large populations are not needed to get resources out of the ground, even in the Arctic. The wheels keep on churning and grinding even as northern settlements lose their residents. For the people who remain in industrial towns across the Russian Arctic and beyond, this is the cruel twist: they are no longer needed, and yet they often have nowhere to go.

At 1:30 am in the morning, some friends and I from the Calotte Academy walked through the ruins of Kirovsk Station on our way back from the banquet dinner. It was late, but thanks to the perpetual daylight, cans of cheap beer and mineral water, and a Styrofoam package of dried calamari picked up at a late-night convenience shop (“toilet free for paying customers”), our energy levels were still high. We walked gingerly through the Kirovsk Station listening to the reverberations of the trains that would never come. A staircase without a barricade led to a second floor where there may have once been a café or waiting room with a view of the carriages that would carry people to Leningrad.

Kirovsk Station’s eerie emptiness illustrates a failure to maintain levels of development reached under the Soviet Union in the Russian Arctic today. And yet despite all the hardships they’ve faced, the warmth of the Russian people still shone through in spaces where there was an inside to speak of. 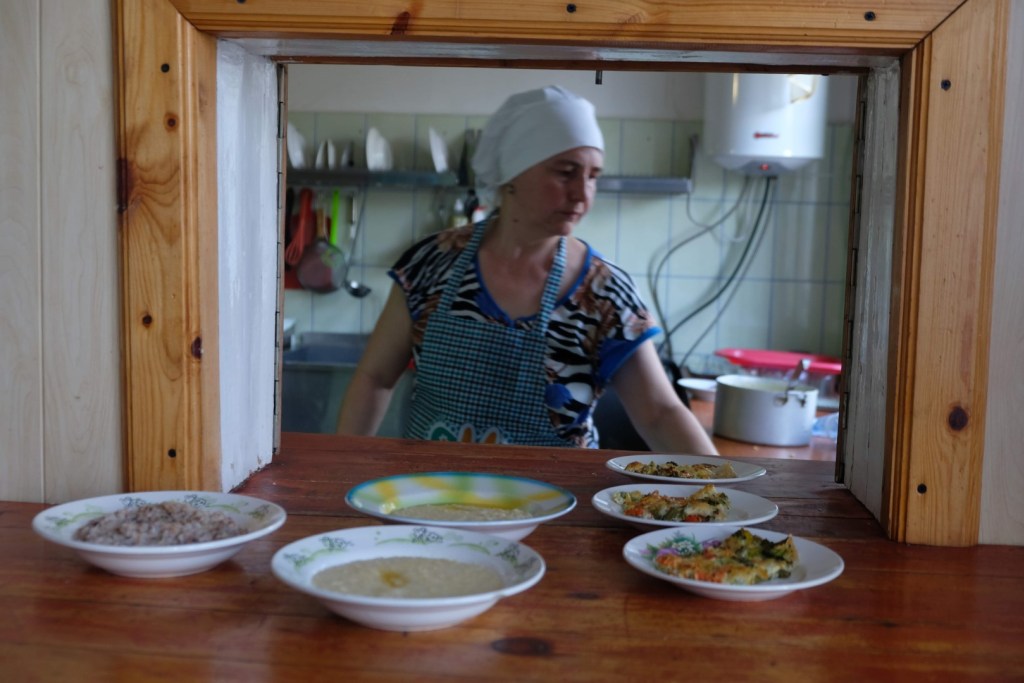 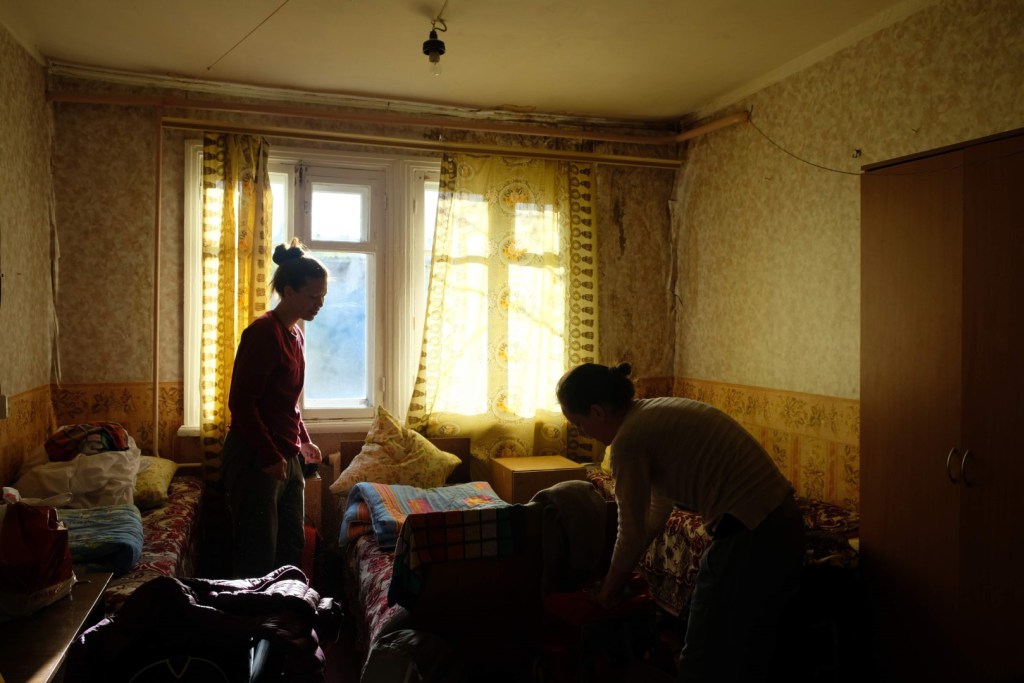 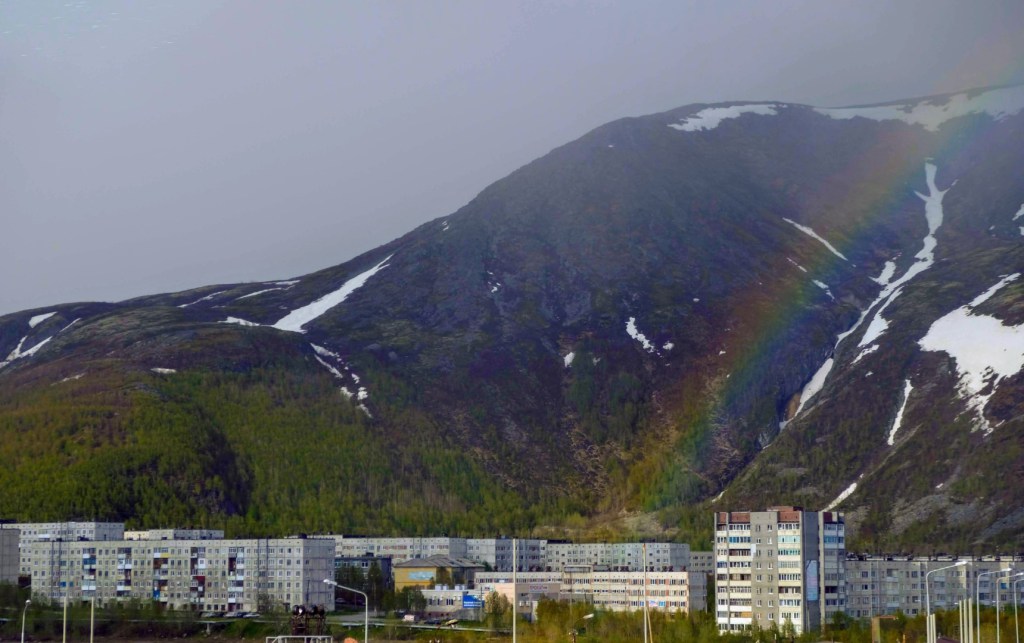 In the kitchen of our science station lodgings, each morning, a single woman cooked up hearty bowls of oatmeal, rice porridge, and plates of vegetable quiche. A samovar was always ready to dispense boiling hot water. And while the ceilings may have been crumbling and the curtains yellowed, somehow, our unheated bedrooms were still cozy in the soft light of summer mornings. Maybe, just maybe, there is something that will one day be found at the end of the Soviet rainbow.

Norway: A century of Norwegian coal mining in Svalbard comes to an end, The Independent Barents Observer

Sweden: Iron mine in northern Sweden to restart production, The Independent Barents Observer