This was once home to the world’s northernmost kindergarten and primary school. Abandoned twenty years ago, Pyramiden, a coal-mining town on the northern edge of the world, is a preserved display of what the Soviet Union wanted to offer in the Arctic if communism worked. But it didn’t.

No, there aren’t any hidden loudspeakers playing The Beatles. The lyrics of Back in the U.S.S.R. are playing in your head. Welcome to Pyramiden, or the Pyramid in English. Even more correct would be Пирамида. The inspiration for the town’s name is easy to understand when looking up. High above the coal mines, the towering top of the mountain looks truly like a pyramid.

This is a Soviet ghost town on Norway’s Svalbard archipelago that was once inhabited by Russian and Ukrainian coal miners and their families.

A foothold on Svalbard

Although not stated publicly, the Kremlin’s main idea with the settlement was not primarily to mine for coal. What could be taken out from beneath the permafrost inside the steep mountain, anyway, was just a tiny thousandth of the coal extracted in the Kuzbass region in southwestern Siberia.

Digging for coal gave the Soviet Union a foothold on Svalbard. The 1920 Svalbard Treaty recognizes the sovereignty of Norway over the archipelago, but all signatories were given equal rights to engage in commercial activities on the islands. In the 1920s, onshore, that meant coal mining. The Soviet Union bought Pyramiden in 1927 from the Swedes, just like its state company Arktikugol (Arctic coal) bought the Barentsburg coal mine further southwest in Isfjorden from the Dutch in 1934.

The same year, a Norwegian state-owned company bought Svea coalmine from the Swedes. With that, only Norwegian and Soviet communities remained on the archipelago.

Walking in Pyramiden today gives you a glimpse into the Soviet-style nostalgia, outdoor as well as indoor. Best of all, it’s not an artificial scenery aimed for some kind of movie production. This is real. The smell of papirosa, likely the strongest cigarette ever made, stains on the indoor walls. Hammer and Sickle ornaments and the Soviet star are used as decoration around the town. In a remote room inside the Palace of Culture are a few empty bottles of the cheap domestic Rossiya and Priviet vodka. A book with the transcripts from the 27th Congress of the Communist Party of the Soviet Union lays on a desk. That was the first congress presided over by Mikhail Gorbachev as General Secretary of the Central Committee.

Gorbachev never got a chance to visit Pyramiden. But he sure had ambitions to conquer the Arctic with the extraction of natural resources, industry and shipping. A year after the 27th Congress, in 1987, the General Secretary gave his famous Murmansk speech where he highlighted the huge potential of the Arctic. Moscow’s Arctic dream was mirrored in Pyramiden. Many of the monumental buildings here at 79 degrees north were erected in the late 1980s. Like the Palace of Culture and the swimming pool. Both the world’s northernmost. Most things, by the way, are the world’s northernmost in Pyramiden; the ballet studio, theater, cinema, beer pub, hospital and so on.

In the late 1980s, more than 1,000 people lived in Pyramiden. Many came from coal mining areas in Eastern Ukraine and Southwestern Siberia. Despite privileges like a cultural palace and sport facilities, life up here, halfway between mainland Norway and the North Pole could be hard in mid-winter when there was no daylight at all and freezing cold wind.

The beauty of the surrounding Arctic landscape in autumn colors leaves an impression. The town is located in a valley in-between steep mountain backdrops. The panorama to the south is filled the with massive Nordenskiöld glacier and other mountain peaks. In between is Billefjorden, the northeastern appendix fjord to Isfjorden coming in west from the Greenland Sea.

The main (and only) avenue is named after the 60th anniversary of the October revolution. Supposed to be a self-sufficient Soviet society, Pyramiden had its own cowshed with pigs, hens and chickens, even milk cows. They grew their own cucumbers and tomatoes in greenhouses that got heat from a power plant fueled with coal mined by the workers. The fence around the primary school has paintings of famous fairy tales. Other paintings, in the Palace of Culture, display traditional heroes from the Great Patriotic War (Second World War).

Despite the war paintings, Svalbard is a demilitarized zone. Though, both Norway and Russia are highly aware of the archipelago’s strategic location. Control over Svalbard in a war scenario could be important for denying access to the important patrol areas for the strategic nuclear submarines based on the Kola Peninsula.

A foothold on Svalbard is for Moscow also important in a larger Arctic strategy. A year ago, a Russian Defense Ministry report listed Norway’s Svalbard policy as a potential risk for war with NATO. The analysis criticized Norwegian authorities for trying to seek “absolute national jurisdiction over Spitsbergen archipelago and the adjacent 200 nautical miles of maritime boundary around.” Spitsbergen is the common name Russia uses for the archipelago, although geographically it is the name of the largest of all islands on Svalbard. The island where Pyramiden, Longyearbyen, Ny-Ålesund, Barentsburg, Grumant and Svea are situated.

When Russia, after the collapse of the Soviet Union and the poor economic situation of the 1990s, had to reconsolidate its assets on Svalbard, Pyramiden was the least important to run. Priority was given to the coal mining in Barentsburg, strategically located on the ice-free west coast at the entrance to Isfjorden. In 1996, a tragedy struck the two mining communities when a plane from Moscow carrying 141 miners and their families crashed during its approach to Longyearbyen airport. Everyone on board was killed. The accident was one of the reasons for Arktikugol, who had chartered the plane, to close Pyramiden.

Last winter, another aviation accident hit Arktikugol when a helicopter crashed en route from Pyramiden to Cap Heer, Russia’s heliport near Barentsburg. The wreck was found on the seafloor of Isfjorden, but none of the eight on board, a crew of five and three scientists, were found.

For Russia to maintain the claim of Pyramiden, there must be some activity. There are still layers of coal inside the mountain, but drilling into deeper reserves will not be profitable. Since Svalbard is part of Norway, Norwegian safety and environmental standards apply by law. There are some 20 to 40 people (depending on who you ask) living in town during late winter, spring and summer season, mainly those engaged in running the tourism business and maintenance of the buildings and infrastructure. Only a few stay during polar night from November to February.

Trust Arktikugol, who practically runs all Russian activities on Svalbard, established a tourism branch in 2015 named GoArctica. With about 450 inhabitants, Barentsburg will still be Russia’s stronghold on Svalbard and the centre for tourism development. Ivan Velichenko, a Ukrainian working for GoArctica, tells the Barents Observer that the strategy is to boost tourism while coal mining will be less important.

“We will make Barentsburg a centre for the Russian Arctic”, Velichenko says. “Soviet-style nostalgia will still be kept in Pyramiden.” Both GoArctica and Norwegian tour operators organize guided tours to Pyramiden. By boat in the summer season and by snowmobile in late winter and spring. GoArctica runs a small hotel, a bar, and a restaurant. Tons of industrial waste and the old storage piles for coal near the harbor have been removed.

See the photo gallery below for more images of Pyramiden: 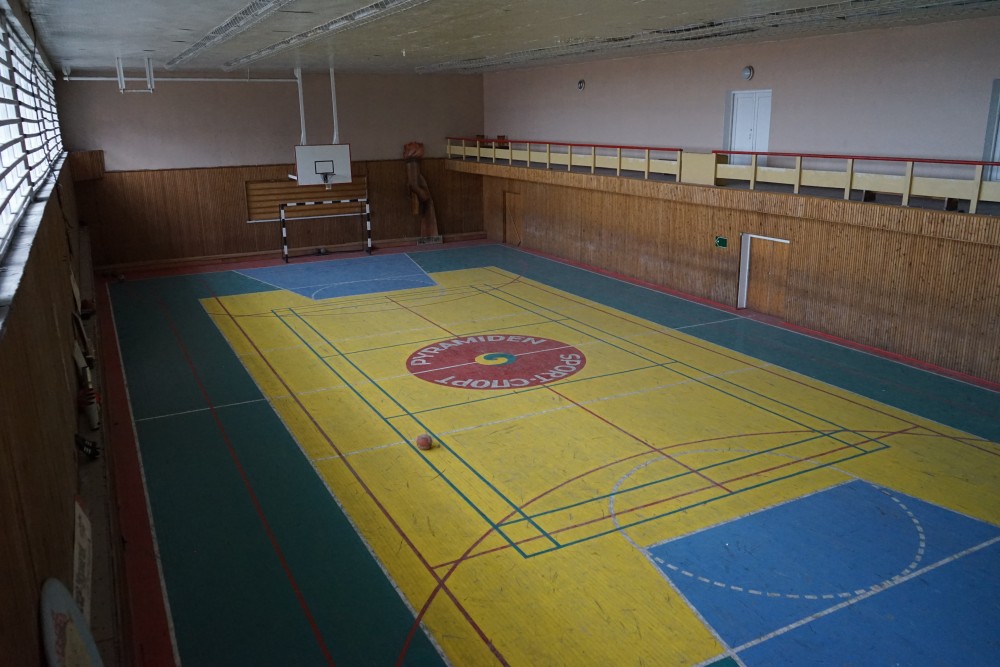 Visitors can today step inside the buildings in Pyramiden. Like this sport hall. (Thomas Nilsen/The Independent Barents Observer) 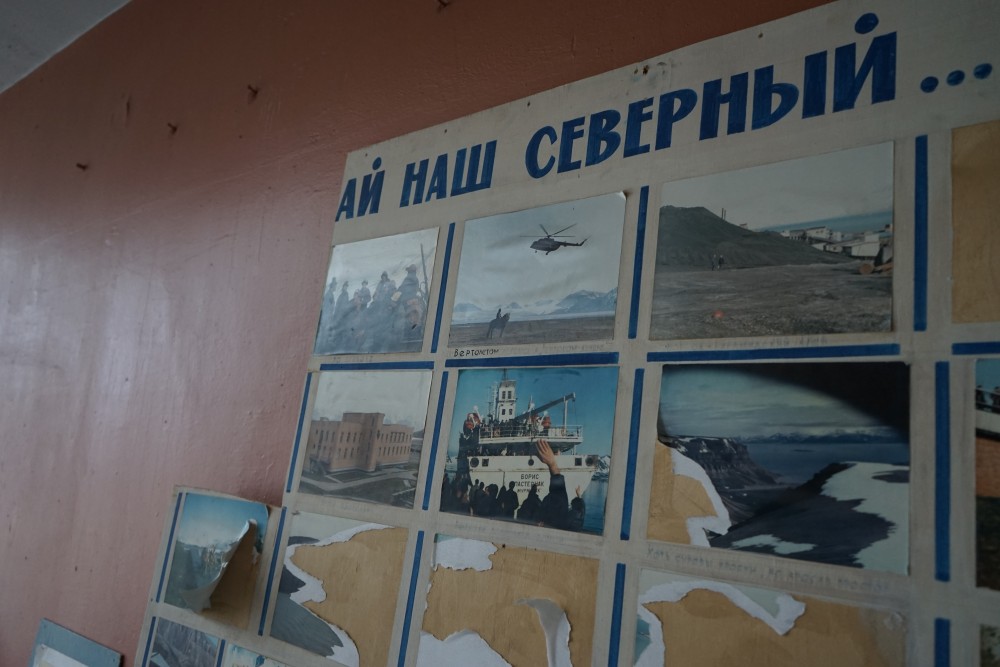 “…. our northern,” reads half of the photo-collection poster left on the wall in the palace of culture. (Thomas Nilsen/The Independent Barents Observer) 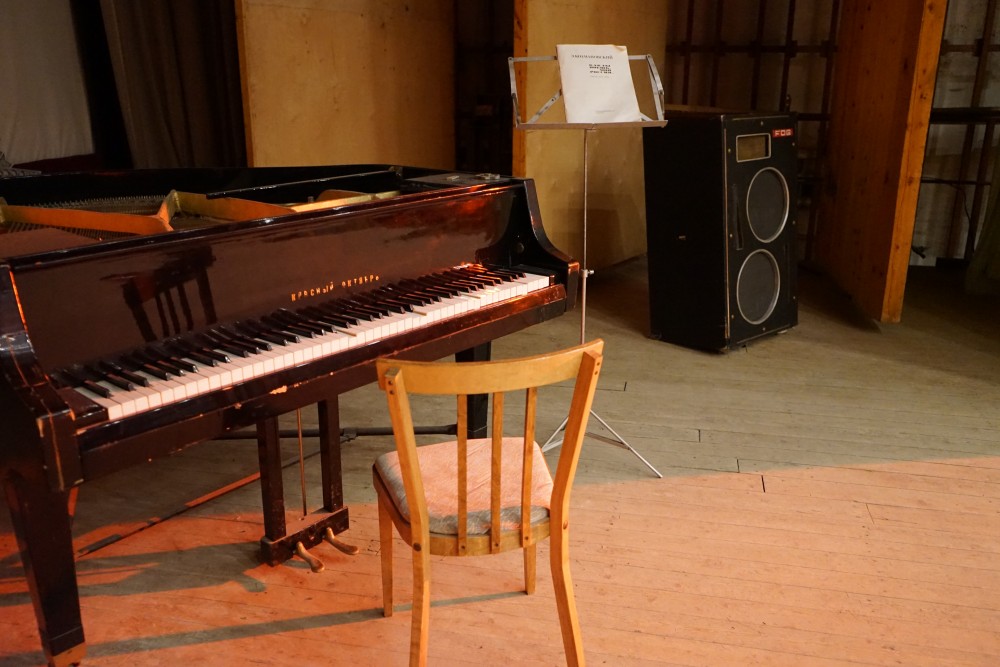 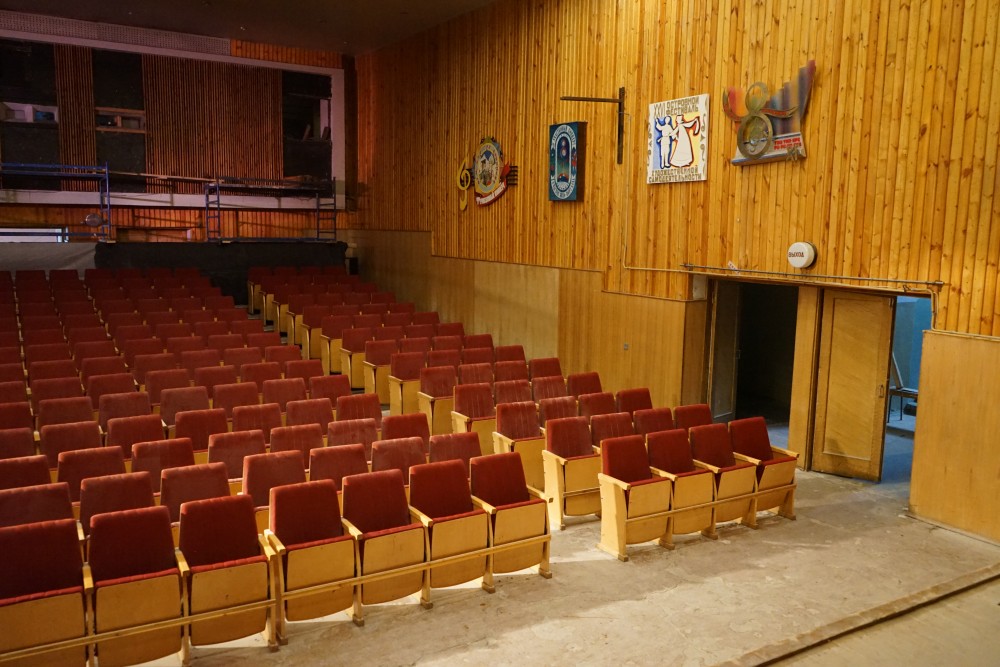 Imagine a Saturday evening when the palace of culture was packed with coal miners listening to classical music. Or maybe there was an Arctic version of Pyotr Tchaikovsky’s Swan Lake ballet on stage? (Thomas Nilsen/The Independent Barents Observer) 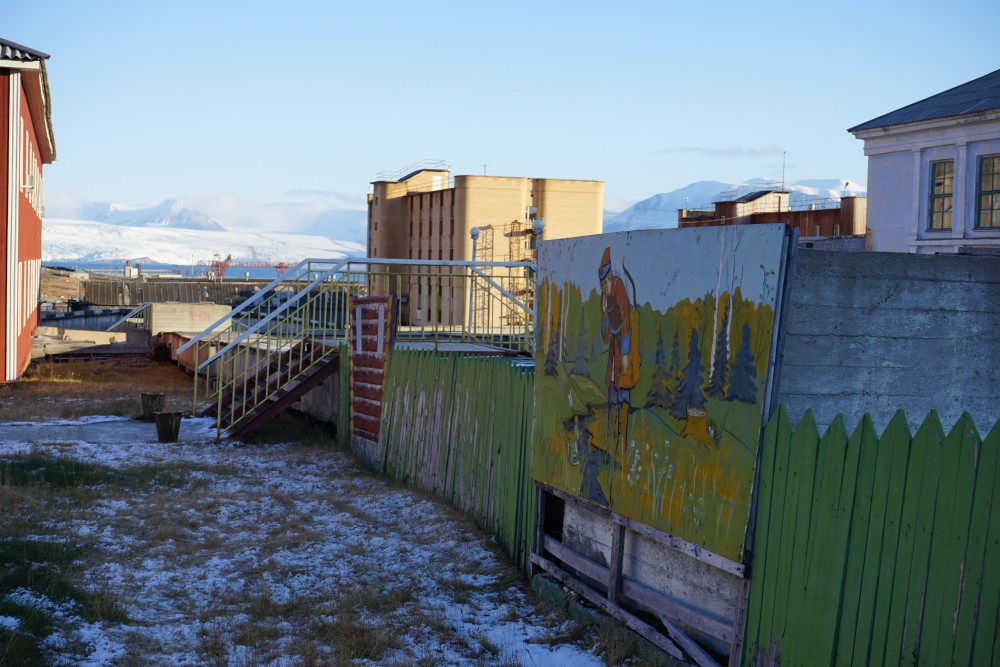 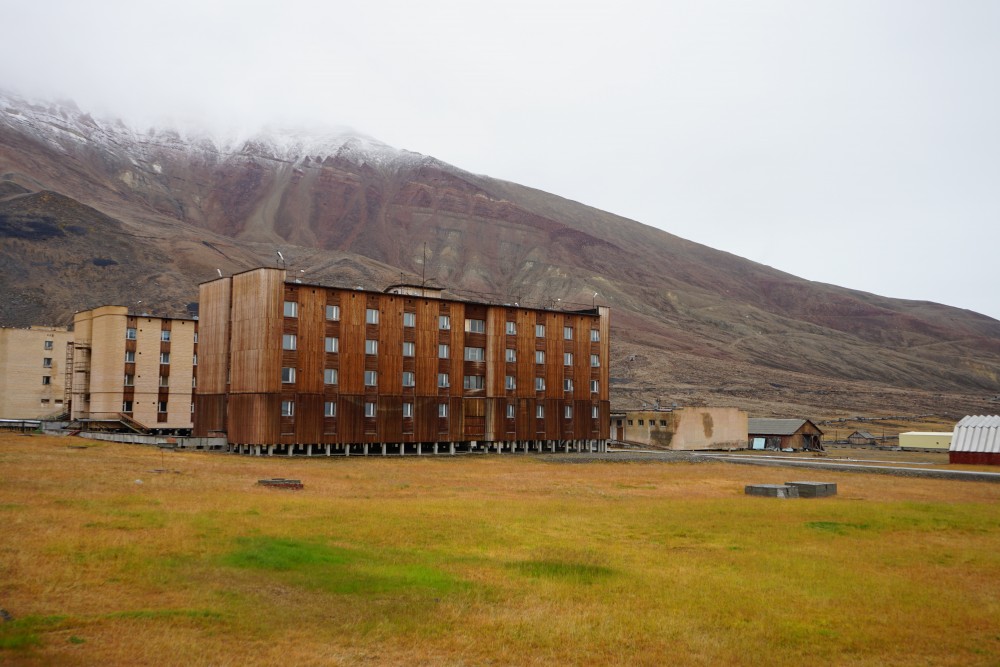 The blocks of flats are well preserved by the Arctic climate. (Thomas Nilsen/The Independent Barents Observer) 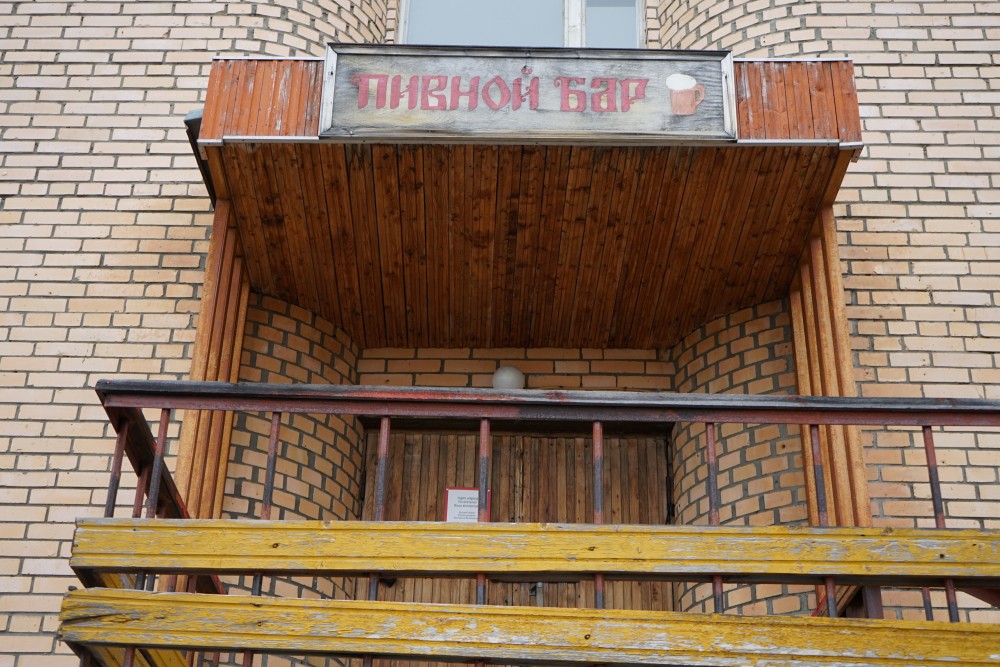 Likely a door to heaven for the coal miners. The sign reads “Beer Bar”, but the last pint was emptied 20 years ago. (Thomas Nilsen/The Independent Barents Observer) 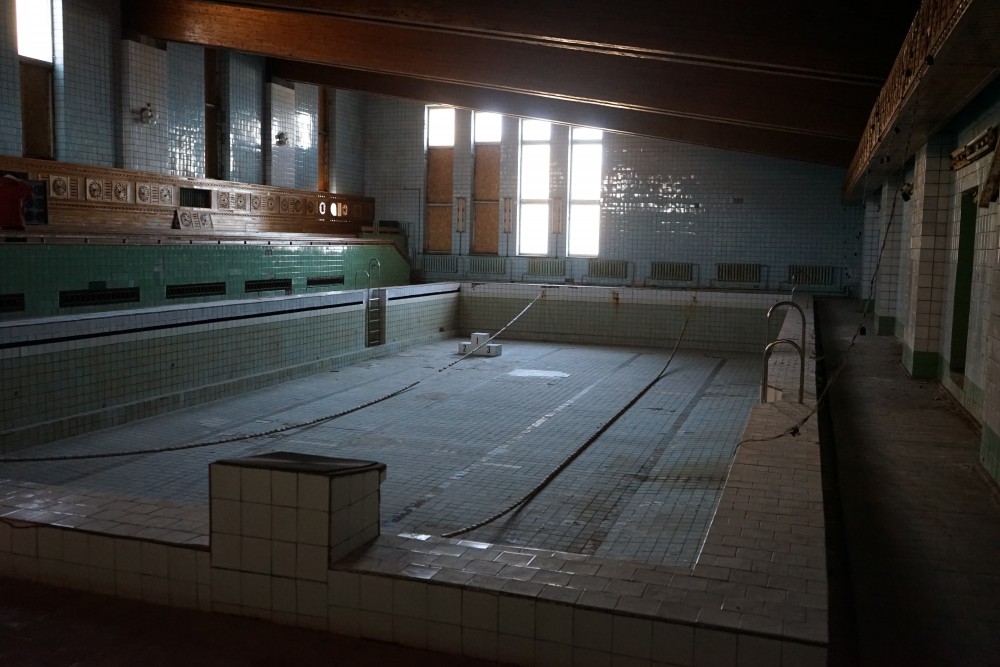 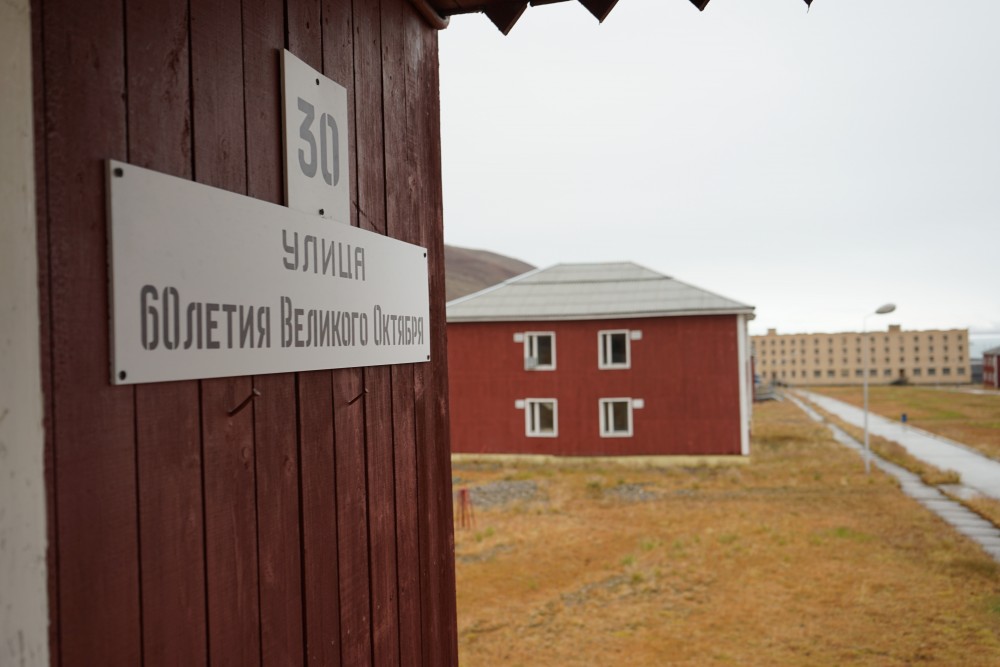 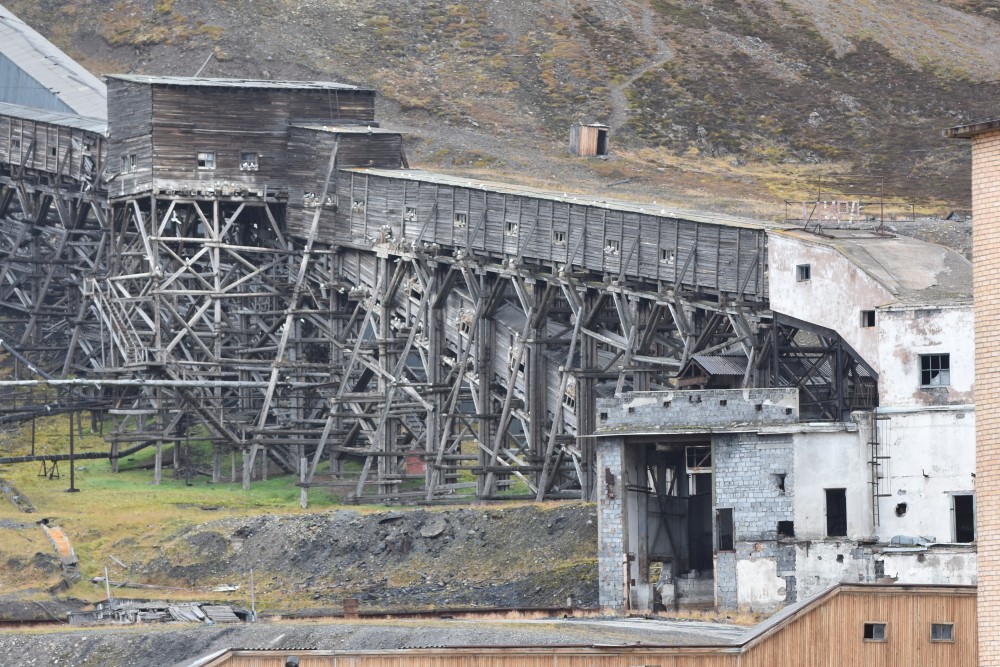 From the shafts, the coal was carried to port via this structure. (Thomas Nilsen/The Independent Barents Observer) 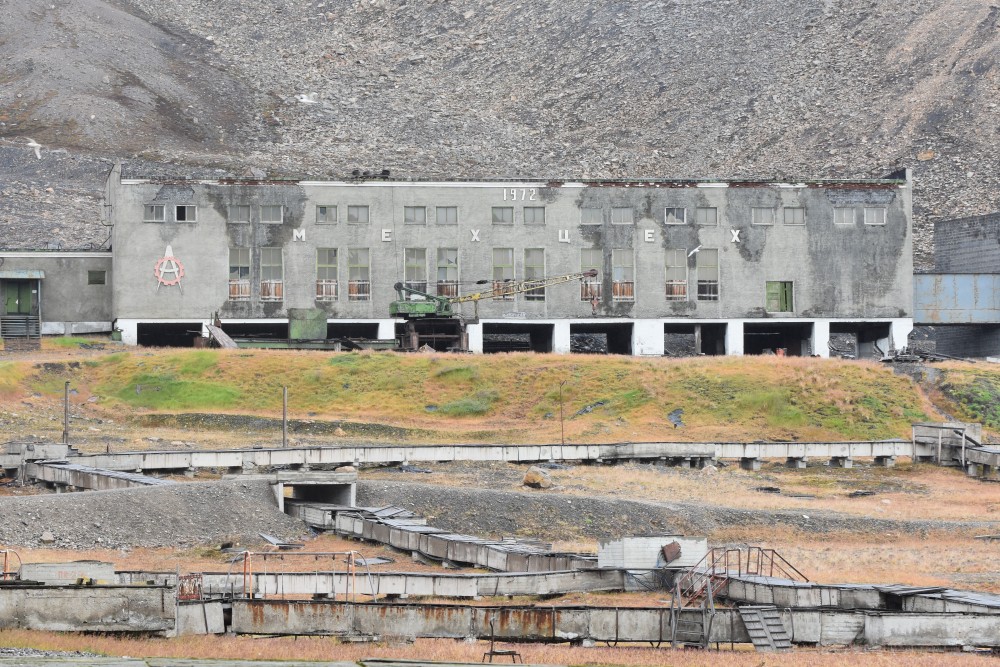 The mechanical workshop for the coal mine. (Thomas Nilsen/The Independent Barents Observer) 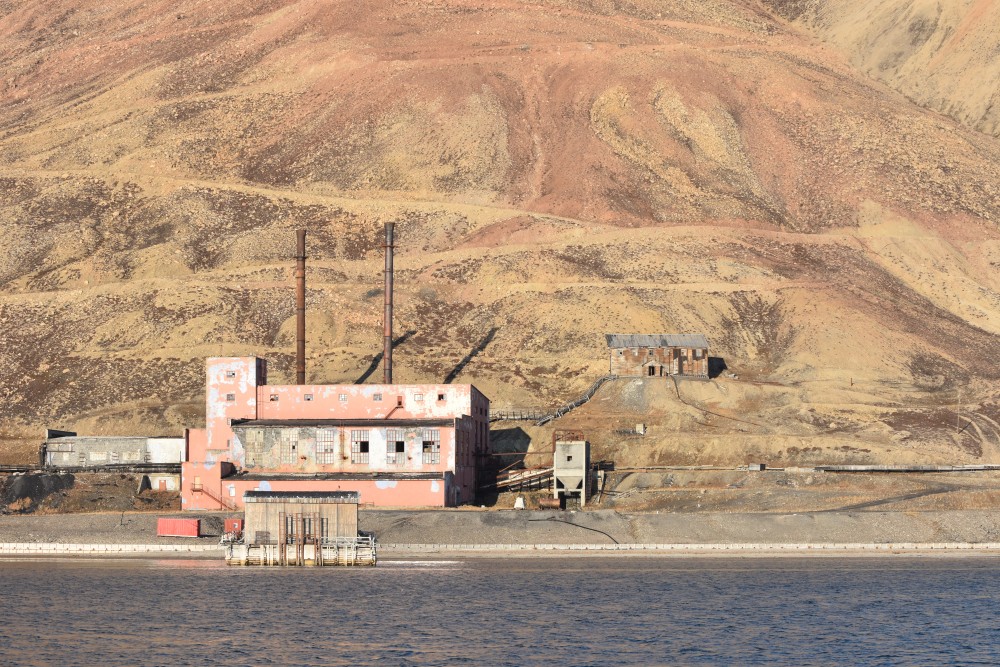 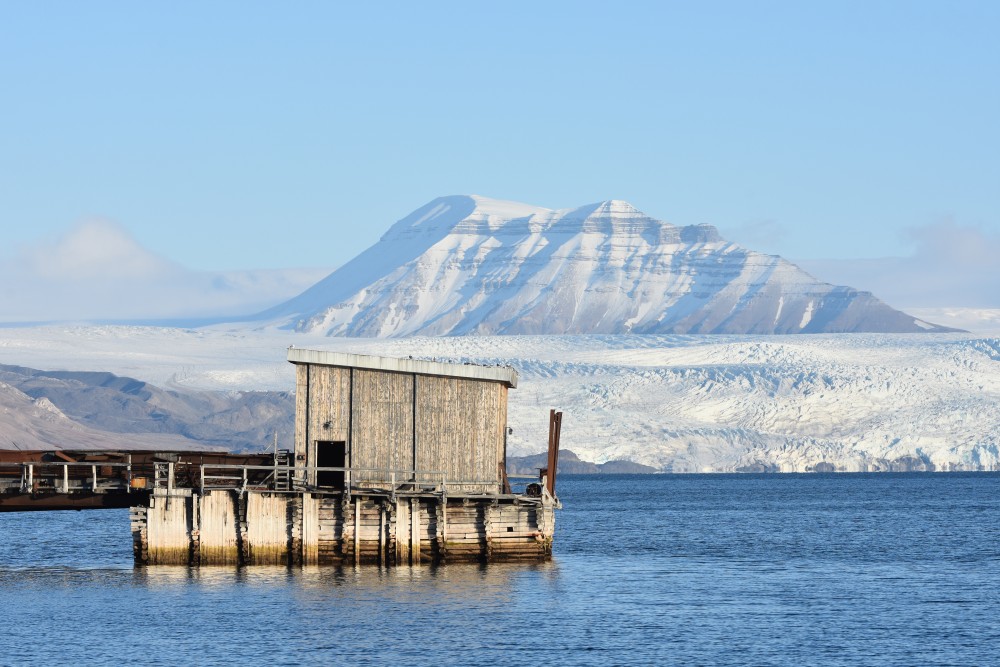 Part of the port facility in Pyramiden. The Nordenskiöld glacier across the fjord. (Thomas Nilsen/The Independent Barents Observer) 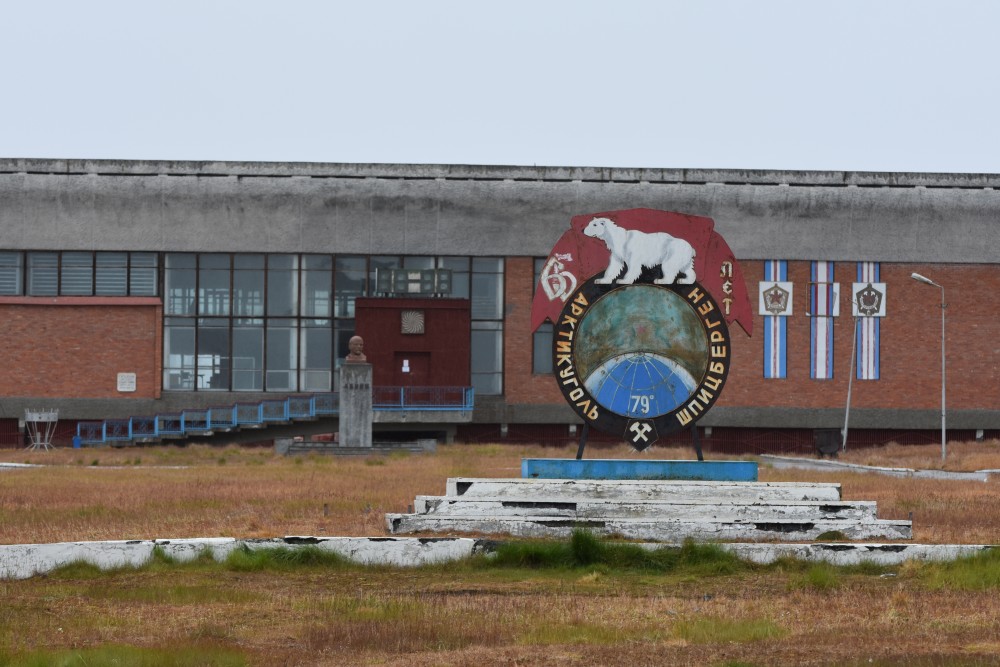 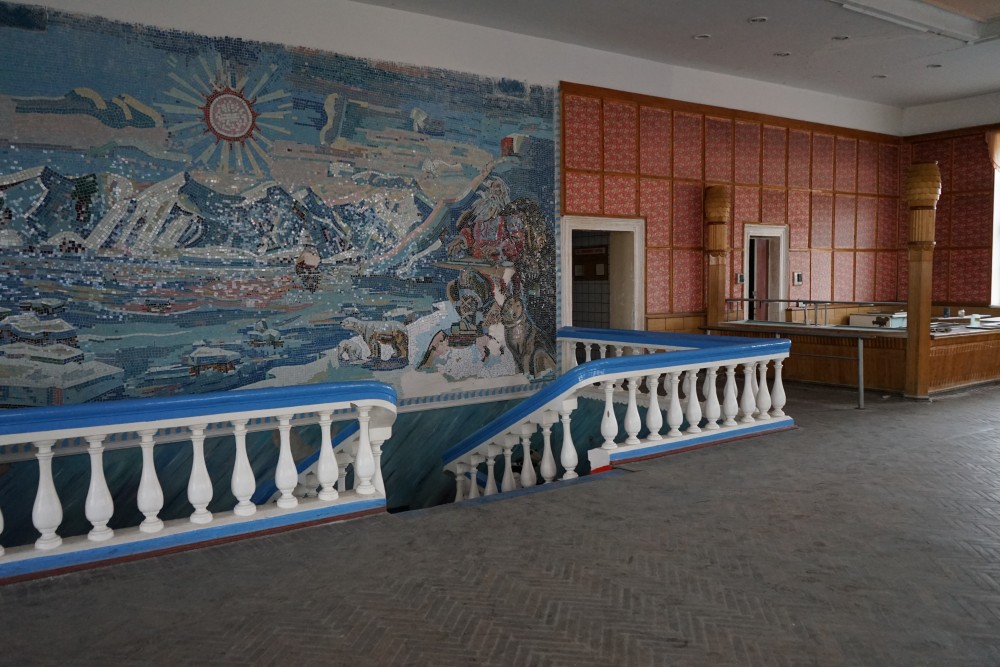 Soviet-style Arctic art made of mosaic on the wall in the cantina. (Thomas Nilsen/The Independent Barents Observer) 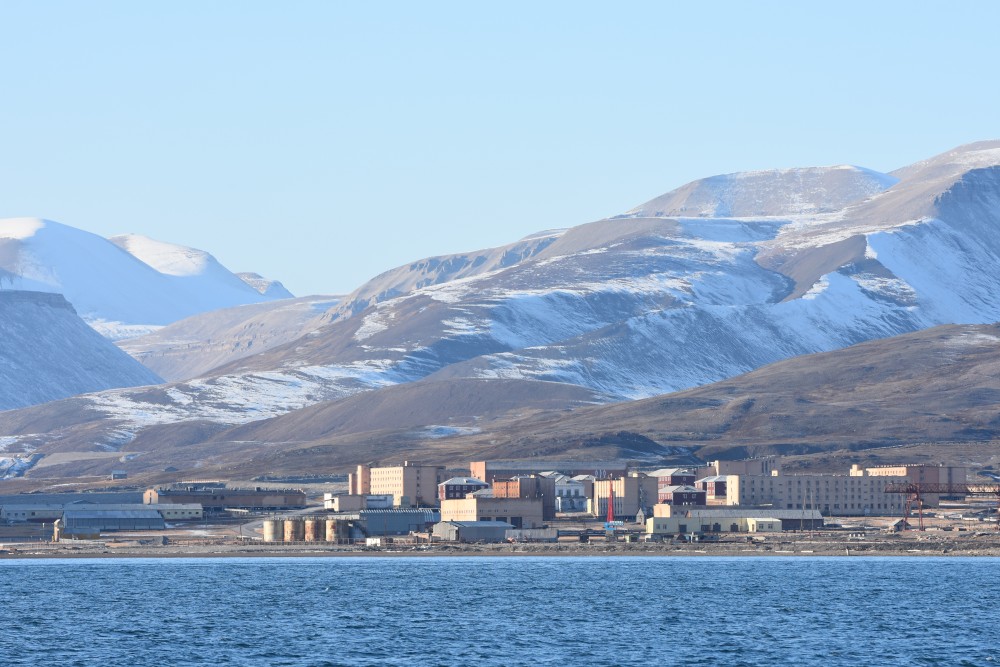 Pyramiden is located in Billefjorden, an appendix fjord in the innermost part of Isfjorden. (Thomas Nilsen/The Independent Barents Observer)

United States: When the ice melts, what will happen to Arctic tourism?, Cryopolitics Blog