When health authorities in the Northwest Territories first started releasing their COVID-19 testing data, the total number of tests performed was jumping by dozens each day.

Now, the rate of new testing has slowed to a trickle. In the last seven days, health workers in the N.W.T. performed just 103 tests — less than a quarter of what they were doing at the end of March.

That may come as surprise, as in recent weeks the N.W.T. has ratcheted up other public health measures to prevent the spread of COVID-19. In the past seven days alone, health authorities have extended a state of emergency, restricted the sale of alcohol, and told residents to be on guard for possible pre-symptomatic carriers.

But the N.W.T. isn’t alone in seeing their testing numbers fall. Yukon is also testing less over that same period, falling from a high of 270 tests in the last week of March to just 46 tests in the last seven days.

And while all five confirmed cases of COVID-19 in the N.W.T. have since recovered, the number of COVID-19 cases in Yukon continues to climb — from 8 to 11 in the last week alone. 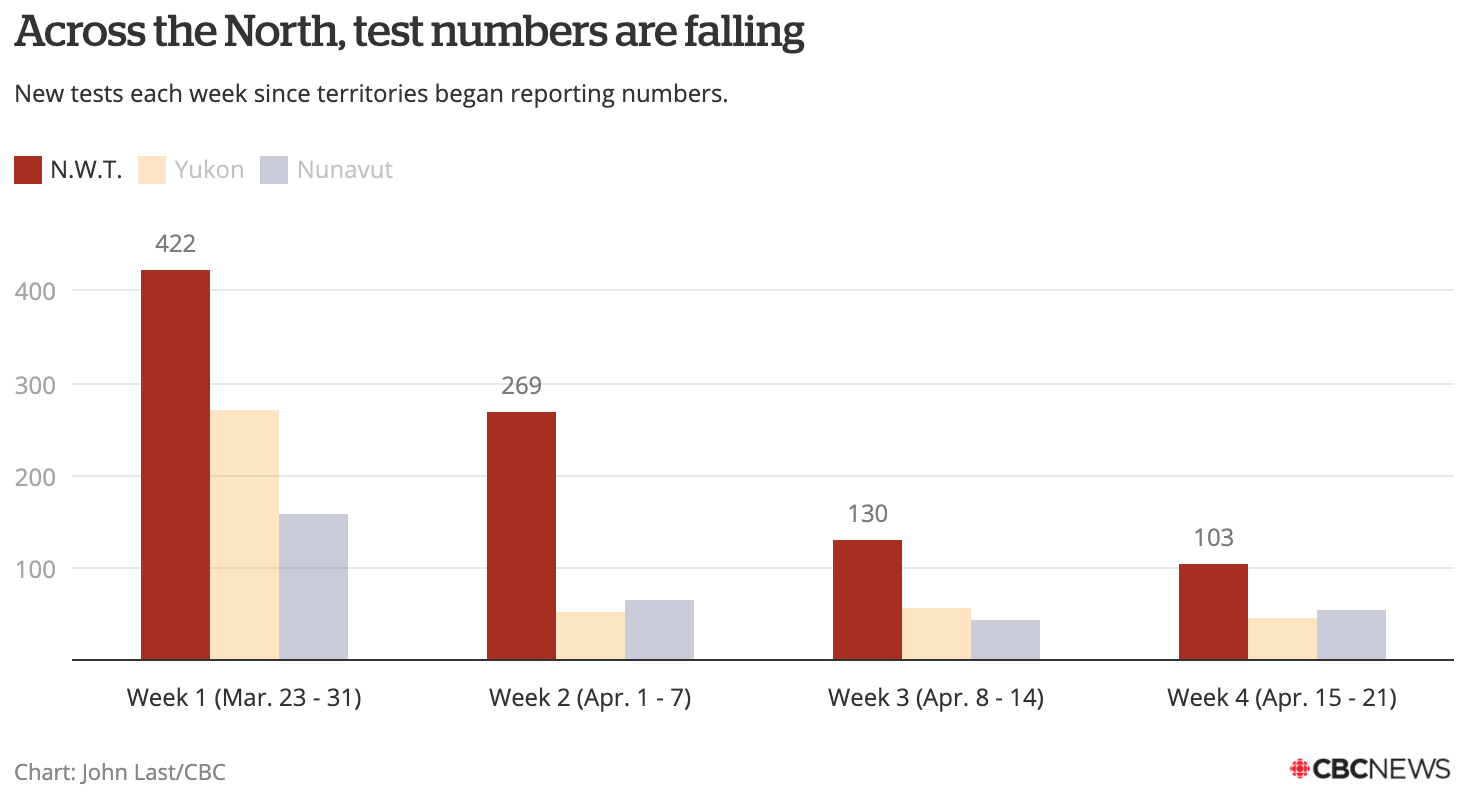 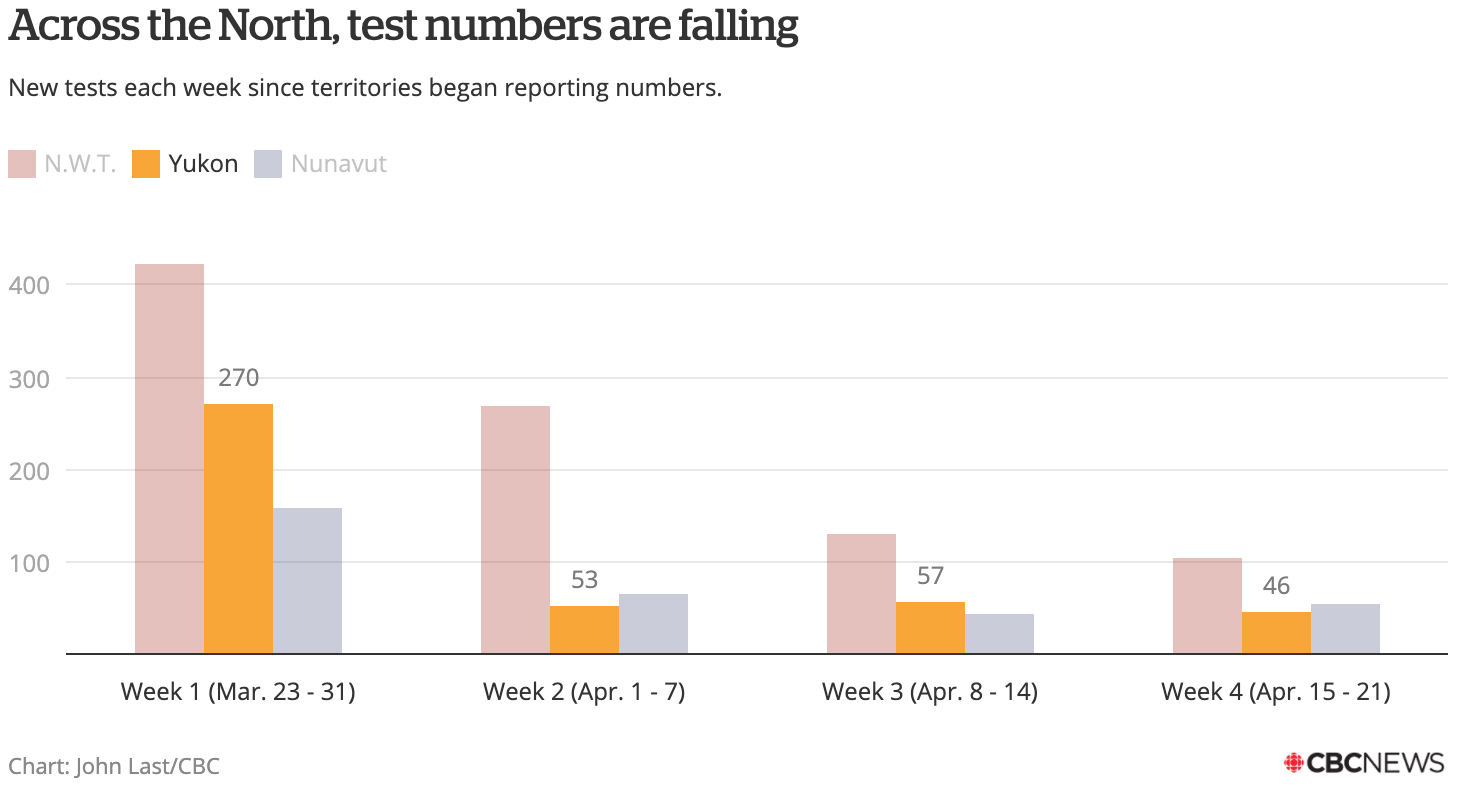 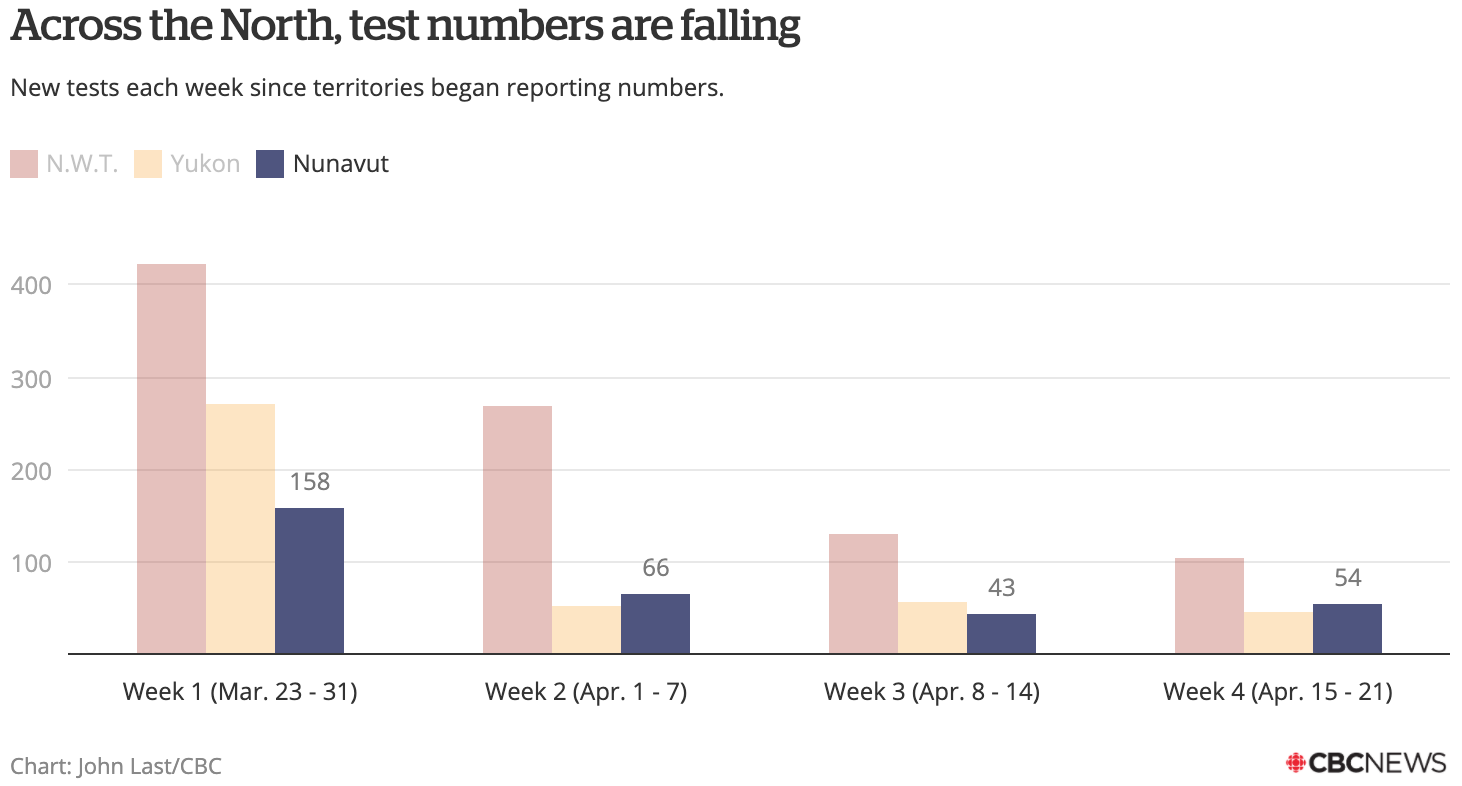 But more people are eligible for testing …

The drop is all the more peculiar as all three territories have expanded the criteria for patients to receive a test, to include patients experiencing milder symptoms.

Since April 3, Nunavut has considered anyone with a fever, cough or shortness of breath eligible for a test, loosening rules that previously restricted testing to those who had recently travelled or come in contact with those who had.

In the N.W.T. today, it’s sufficient to be experiencing fatigue and muscle pain, or a sore throat and an impaired sense of smell, to receive a test, according to new standards.

“That said, there’s always clinician decision-making capacity around who should be tested,” said Dr. Sarah Cook, the territorial medical director for the N.W.T. Patients could be experiencing one COVID-like symptom, or none at all, and receive a test, if a health care worker thinks there is a high enough risk.

And in Yukon, Chief Public Health Officer Dr. Brendan Hanley health workers will continue to test “whenever physicians are concerned about COVID hiding behind symptoms.”

All this adds up to a genuine mystery — why would testing rates be falling in the middle of a pandemic?

According to health officials in all three territories, part of what’s driving a decline in testing is the end of the winter flu and cold season.

“There are simply fewer people who are presenting with symptoms than there were a few weeks ago,” said Dr. Sarah Cook, the territorial medical director for the N.W.T.

Equally, Cook says, public health measures to prevent the spread of COVID-19 — bans on travel and public gatherings, and regular reminders to wash hands — are reducing the prevalence of the other infectious illnesses that produce COVID-like symptoms.

Travel restrictions — in place in all three territories — mean the number of people possibly exposed to the virus that causes COVID-19 is also falling.

“We have less people exposed to COVID where COVID is actively circulating, thus less people needing to be tested,” said Hanley, in response to a question about falling testing rates Friday.

All that means, reassuringly, that the need for testing is substantially lower.

The future of testing

That doesn’t mean the end of testing for COVID-19. Patterson said he’ll be asking nurses and physicians in some communities to “be a little more liberal in swabbing,” especially where few tests have been performed in the area to date.

Like all three territories, Nunavut currently suffers from long wait times for test results that Patterson called “not acceptable” — six or seven days, in Nunavut’s case. 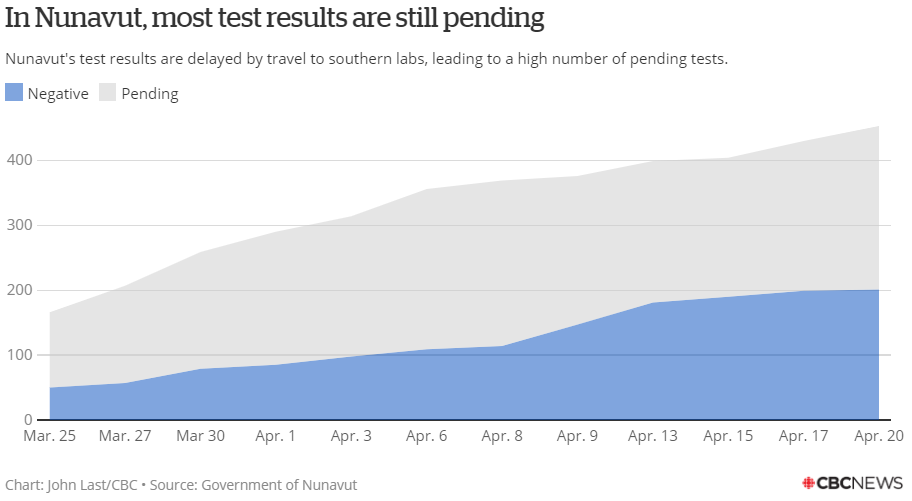 As Dr. Cook, the N.W.T.’s medical director, has frequently pointed out, that lag time prevents health authorities from recognizing community spread in real time. That means a single point of infection is given time to leap to others before it’s confirmed.

In the Yukon and N.W.T., health authorities are hoping to change the game with the introduction of new testing kits in the next several weeks, which should be able to provide results in just hours. (The exact timeline is dependent on the time it takes to set up and train staff on the new tests.)

But don’t expect that to change much. In Yukon, Dr. Hanley, the chief public health officer, said the new systems “will never replace the testing we have,” as they may not deliver the same “gold standard” accuracy as the testing being done now.

“Almost certainly, we will need confirmatory testing still to be carried out,” he said.

And in the N.W.T., where Dr. Cook says testing is already available in every community, the new testing kits may not come with a new expanded testing criteria.

“The testing strategy in the N.W.T. is extremely aggressive, even if it looks like the numbers are decreasing,” she said.

The territory still has the highest per capita rate of testing in Canada, she said. But it also doesn’t require health-care providers or other essential workers to be tested, instead waiting for symptoms to appear.

“It’s possible you could have a negative test that would be falsely reassuring,” Dr. Cook explained, and the jury is still out on whether testing asymptomatic individuals is effective.

The N.W.T., she said, is taking “a more conservative, safer approach, which is to say anyone that’s coming in … has to take precautions.”

That means keeping in place tough restrictions a lot longer — even as testing numbers and active cases come gradually closer to zero.

Arctic: Roundup of COVID-19 responses around the Arctic, Eye on the Arctic

Sweden: Why Sweden can’t declare a state of emergency over COVID-19, Radio Sweden