The Arctic sea ice extent reached a record low in July, shrinking to levels not seen since satellite observation of the region’s ice cover began in the late 1970s, according to an international team of researchers drifting in the Arctic aboard the German research icebreaker, Polarstern.

The sea ice retreat has been especially pronounced off the Siberian coast, leading to a virtually ice-free Northeast Passage by mid-July along nearly all of Russia’s Arctic coastline from the Bering Sea in the east to the Barents Sea in the west, researchers said.

According to the U.S.-based National Snow and Ice Data Center (NSIDC), on July 15, Arctic sea ice extent stood at 7.51 million square kilometres, 330,000 square kilometres below the record for July 15, set in 2011.

In the Russian Arctic, roughly 1 million square kilometres less of the ocean is covered with ice in July than in the past seven years, according to MOSAiC.

By contrast, ice extent north of Alaska is near the 1981 to 2010 average for this time of year.

This year, temperatures on the East Siberian coast were more than 6 C warmer than the long-term average in May and June, according to MOSAiC.

In June, this warming also led to intensified sea ice retreat in the Laptev Sea, a phenomenon that spread to the East Siberian Sea in early July.

By mid-July this had progressed to such an extent that the Northeast Passage was completely open for the first time in 2020. 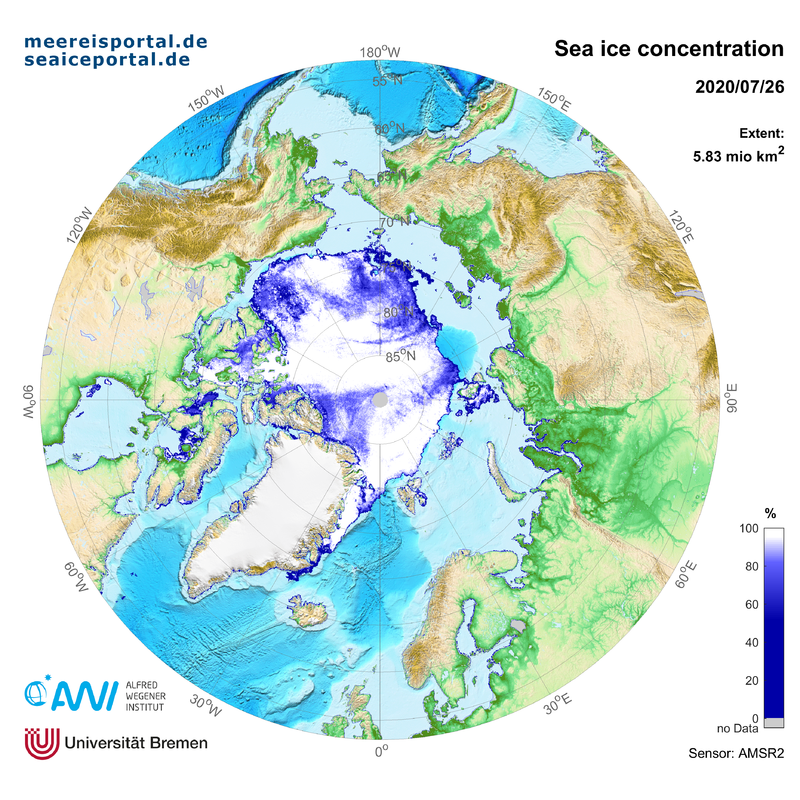 Since the beginning of July, a high-pressure cell has settled over the East Siberian and Chukchi Seas, accompanied by unusually warm temperatures – up to 10 C above average – over the Central Arctic.

“Introducing so much warmth into the system so early in the year has accelerated the melting of the ice,” said in a statement MOSAiC expedition sea ice physicist Marcel Nicolaus from the Alfred Wegener Institute, Helmholtz Centre for Polar and Marine Research (AWI).

“This has also been worsened by the low albedo at this time of year, when the sun sits high in the sky during the Polar Day, producing an especially pronounced feedback.”

Gunnar Spreen from the Institute of Environmental Physics at the University of Bremen and a member of the sea ice team on the MOSAiC expedition said it’s still too soon to say whether this trend will continue until the yearly minimum in September, since it is largely dependent on weather conditions.

Nicolaus, who like Spreen is currently in quarantine in preparation for the last cruise leg of the MOSAiC expedition, said he can’t wait to start analyzing the expedition’s extensive field data.

“To the best of my knowledge, this is the first time that the melting has been consistently monitored up to the point at which the ice completely disappears.”Marcel Nicolaus, sea ice physicist

Meanwhile, the Polarstern is currently in the Fram Strait between Svalbard and Greenland.

Markus Rex, leader of the MOSAiC Project and an atmospheric physicist at the AWI in Potsdam, said while Polarstern remains firmly encased in ice, all the ice around their ice floe has long-since broken up or been ground into fragments.

“Today we measured a balmy 14 C 300 metres above the floe, and the melting is in full swing. For the last phase of MOSAiC, our focus will be on the freezing phase: the last piece of the puzzle in our observations of the Arctic’s annual cycle.”Markus Rex, leader of the MOSAiC Project

Polarstern is expected to move further north in mid-August for the last leg of its expedition, once it completes its resupply and the turnover of the research team and the vessel crew, he added.

Canada: ‘They get around’: Pelicans spotted as far north as Nunavut, in Canadian Arctic, CBC News