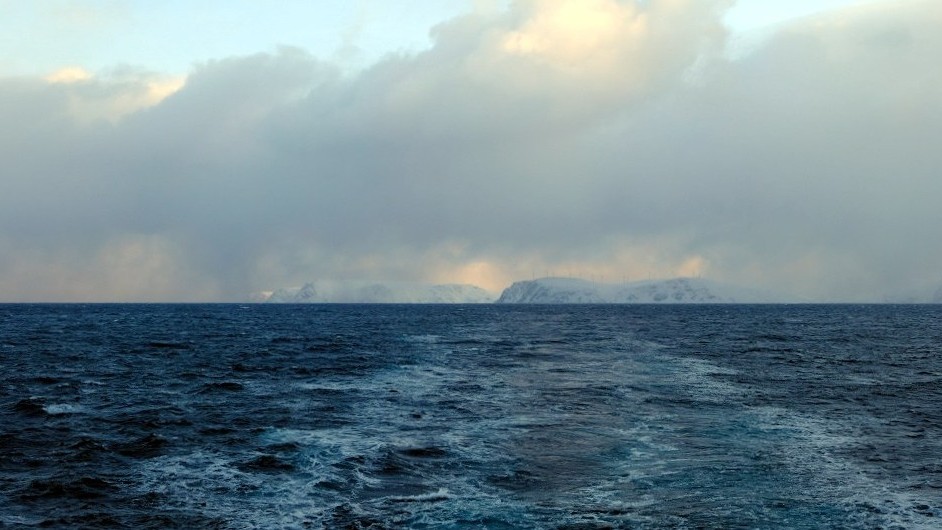 Sailing via the North Pole was impossible until the 1950s. Now, it is all but inevitable. Even if all greenhouse gas emissions ceased, the Arctic Ocean is set to become ice-free in September by 2050.

Last summer, I wrote a blog post entitled, “The Arctic shipping route no one’s talking about.” Now, with four colleagues – Scott Stephenson, Kang Yang, Michael Bravo, and Bert De Jonghe – I’ve elaborated on the ideas explored in the post in the form of a peer-reviewed article, which has just been published in Marine Policy.

The latest scientific models suggest that a route directly via the North Pole may open as early as the 2040s. As we point out, this is significantly sooner than what models predicted in the early 2000s, when the consensus was that the Central Arctic Ocean would not become ice-free in summer until the 2070s.

The Transpolar Sea Route (TSR) will first open for a brief period in September of each year, when Arctic sea ice reaches its annual minimum. As climate change continues apace, the season will likely gradually lengthen to a point at which shipping via the TSR could become more commonplace.

Once open, the TSR will represent a third Arctic shipping route in addition to the Northern Sea Route (NSR) and Northwest Passage. The route will not suddenly spring into use just because sea ice disappears, however. Shipping requires infrastructure, from vessels to ports and search and rescue equipment.

Already, more ice-class vessels are being built — often in Chinese shipyards — to support gas development on the Yamal Peninsula and resource extraction in northern Canada and Greenland. Other ice-class vessels that have been in existence for many years are servicing new, more northern sites. In November 2019, for instance, MV Nordic Barents – the same ship which made the first foreign-flagged transit of the Northern Sea Route in 2010 – carried 41,000 tons of ilmenite from Moriusaq, Greenland to Quebec. Such ice-class ships could conceivably be employed along the TSR, too.

If they are robust enough, ice-class ships could sail directly across the North Pole from a port in Asia to a port in Europe without any need to stop. Yet since operating ice-class ships tends to be costlier than conventional open-water ships, shipping lines prefer to minimize the distance they have to sail.

Calling at Nome, Longyearbyen, and Finnafjord?

A more cost-effective alternative to using ice-class ships for point-to-point shipping, as we discuss, might be to build transshipment ports around the entrances to the TSR in the Bering Strait, between Alaska and Russia, and the Fram Strait, near Svalbard. At these ports, cargo could be switched between ice-class ships sailing in polar waters and open-water vessels headed south. In three places in particular — Nome (Alaska), Longyearbyen (Svalbard), and Finnafjord (Iceland) — plans are underway to build ports that could support trans-Arctic shipping.

Port construction is a costly undertaking. National and state governments that may have stepped up in the past to build quays and warehouses are now cash-strapped. Increasingly, private-public partnerships and even foreign investment are taking the place of public funds. Foreign capital nowadays often originates with state-owned port holdings companies based in China and the United Arab Emirates. Dubai-headquartered DP World, for instance, recently signed a memorandum of understanding with Russian partners to jointly develop the Northern Sea Route.

Russia, China, and the future of Arctic shipping

As the TSR develops, two Arctic powers — Russia, a historic one, and China, an emerging one — will no doubt be countries to watch.

Russia: beware the opening of the TSR

For Russia, the TSR could undermine the attractiveness of the NSR. For starters, a route via the North Pole cuts off a further 1-5 days for journeys between Asia and Europe compared to the route hugging the Russian coastline.

The TSR’s bathymetry is also more favorable to large ships with bigger drafts. The NSR’s shallow straits mean that it’s all but impossible for the Panamax ships, which are already becoming outdated as shipping lines seek greater economies of scale and ever-larger ships, to transit. This summer, the Panamaxes that will be plying the NSR will, as usual, have to sail north of the New Siberian Islands. If sea ice retreats sufficiently, shipping lines might decide not to bother with the NSR at all. Sailing via the TSR would avoid the hefty icebreaker escort fees that the Russian government mandates regardless of the presence of ice.

Now, the country’s first domestically built icebreaker, MV Xue Long 2, which launched in 2018, is currently on its first voyage through the Central Arctic Ocean. Given the increasing role China plays in Arctic maritime development, especially along the Northern Sea Route, the state and its associated entities may seek to assist with building infrastructure to support the TSR. These efforts could eventually parlay into efforts to participate in governance of the new shipping route, too.

Nevertheless, it’s worth underscoring that a robust international regulatory system is in place to regulate shipping in the Central Arctic Ocean. The United Nations Convention on the Law of the Sea (UNCLOS) and the International Maritime Organization’s Polar Code set many of the globally agreed ground rules regarding sailing in the high seas through which much of the TSR runs. The signing of a 16-year moratorium on fishing in the Central Arctic Ocean in 2018 also points to how governance in these increasingly accessible waters continues to be formalized and strengthened.

Does it matter who owns the North Pole?

Some issues remain unclear, however. For instance, UNCLOS Article 234 allows states to enact environmental regulations in ice-covered waters in their exclusive economic zones, which extend roughly 200 nautical miles out from their coastlines. Both national governments and environmental organizations would undoubtedly want this clause to continue to apply even as the ice is melts, but whether the law will still be interpreted in their favor remains subject to debate.

From afar, trans-Arctic shipping may seem exciting, exotic, and even romantic. But it’s crucial to remember that a maritime route via the North Pole is coming at the cost of the Arctic as we know it, and as it has been known for millions of years.

The impacts of a seasonally ice-free shipping lane across the North Pole will be felt most acutely at the local rather than global scale. The more vessels there are, the greater the risks of air pollution and oil slicks and spills. Ice-breaking vessels could also damage the ice on which many Arctic species rely, from walruses to polar bears. Indigenous Peoples, especially in the Bering Strait, still depend on many of these animals for subsistence. Shipping-related disturbances to the Arctic’s flora and fauna could negatively impact the health of people living in the region, along with their cultural and spiritual well-being.

Rubbing salt into the wound, the U.S. Army Corps of Engineers recently determined that port construction in Nome, Alaska would have “no impact” on Indigenous Peoples. Kawerak, Inc., the non-profit division of the Bering Straits Regional Corporation, strongly disputes that conclusion.

These two incidents underscore that while Indigenous Peoples have been gaining greater influence in Arctic discussions over the past two decades, that positive trajectory can suddenly be reversed. Regional bodies like the Arctic Council that are less subject to volatile national politics should therefore endeavor to chart a steadier, more upward course for Indigenous rightsholders in the Arctic.

There is a way to make the opening of the TSR work for both local residents and global markets. Harbors could be dredged in a way that avoids disturbing local archaeological heritage (i.e. by not running roughshod over ancient sites, as iron ore mining company Rio Tinto controversially did in the Juukan Gorge in Australia’s Pilbara region this past May). Ports could be built to accommodate both large vessels and small skiffs used for subsistence purposes. And local people could be ensured jobs in port operations.

Lessons from Svalbard, where the archipelago’s many years of experience with shipping has enabled the local community to develop the requisite institutions and regulations to help manage the industry’s growth, could perhaps be applied more proactively to places in the Arctic where large vessels are appearing for the first time.

The final countdown to an ice-free North Pole

Sailing via the North Pole was impossible until the 1950s. Now, it is all but inevitable. Even if all greenhouse gas emissions ceased today, scientists have concluded that the Arctic Ocean is pretty much set to become ice-free in September by 2050.

Approximately thirty years ago, the first icebreaker carrying tourists to the North Pole had to plow through thick multi-year ice despite it being summer. Now, we have twenty to thirty years to prepare for a world of ice-free, blue-ocean, trans-Arctic sailings.

Let’s hope we use that time wisely.

Related stories from around the North

Denmark: Pompeo to talk Arctic at upcoming meeting with Danish Foreign Minister, Eye on the Arctic