The foreign ministers of all eight Arctic countries are gathering in Reykjavik for the Arctic Council ministerial on May 20, a meeting many hope will help turn the page on the last four years of U.S. climate drama within the forum.

“There was so much disruption at the [2019] Finnish ministerial caused by (then Secretary of State Mike) Pompeo, first with his speech, then the refusal to sign a joint declaration mentioning climate change,” Troy Bouffard, the director at the Center for Arctic Security and Resilience at the University of Alaska Fairbanks, said in a phone interview.

“I’m looking forward to seeing the Arctic Council get back on track with this ministerial, having a joint declaration, speaking with one voice, having consensus and being a normal Arctic Council again.”

The Arctic Council is an international forum made up of the eight northern circumpolar countries, and six Arctic Indigenous groups. It was set up in 1996 for the Arctic states to work together on environmental protection and sustainable development.

Military and security issues have been explicitly excluded from the Arctic Council since its founding to allow the circumpolar community to focus on common interests and challenges such as climate change.

The forum functions on consensus.

In its 25-year history, the forum has largely managed to prevent outside political tensions from interfering with its work. But it was tested under the Donald Trump presidency by an administration that often described climate change as a hoax, putting the U.S. at odds with the rest of the Arctic community.

At the 2017 Fairbanks ministerial, U.S. officials balked at signing a joint declaration unless climate change language was significantly softened and reference to the Paris Climate Accord was removed. Negotiations went on to almost zero hour, before then-Secretary of State Rex Tillerson agreed to sign the joint declaration with the Paris agreement and other climate references still in.

But one month later, the U.S. withdrew from the Paris Climate Accord completely, a move blasted by politicians in the other Arctic states.

Then on the eve of the 2019 ministerial in Rovaniemi, Finland, the new U.S. Secretary of State Mike Pompeo, stunned delegates with a speech questioning Chinese and Russian activities in the Arctic, introducing the kind of hard security issues that had been taboo since the forum’s founding.

Marc Lanteigne, a Canadian associate professor of political science at the University of Tromso – The Arctic University of Norway, says all eyes will be on current U.S. Secretary of State Antony Blinken at Thursday’s ministerial to see how the Biden administration will be positioning itself on the North.

“The United States has a lot of diplomatic ground to make up for after what happened in Rovaniemi,” Lanteigne said in a phone interview from Tromso. “There’s going to be a special interest in how the U.S. proposes to jumpstart cooperation with the other council members, especially around climate change after the previous administration having dismissed it as a myth.

“We already have the U.S. back in the Paris accord, so there will be great interest in Reykjavik to see how the Arctic will now factor into the U.S.’s approach to climate change.”

The biennial ministerial meeting is where the forum’s rotating two-year chairmanship is handed over, and when updates are given on projects from the forum’s six working groups.

On Thursday, current president Iceland will hand the Arctic Council gavel over to Russia.

Russia’s chairmanship comes at a time of increasing tensions between it and the West over the country’s actions in Ukraine, which included sending tens of thousands of troops to Ukraine’s border in April, and concerns in the West about Russia’s investment in military infrastructure in the North.

In April, the Biden administration expelled 10 Russian diplomats and imposed sanctions on Russians and companies in protest of Russia’s interference in the 2020 presidential election as well as hacking campaigns. In response, Russia expelled 10 American diplomats and banned certain officials from entering the country.

“One could certainly argue that this ministerial is taking place at time when hard security issues are certainly on the radar,” Lanteigne said. “The U.S. recently signed an agreement with the Norwegian government for joint use of some of the military bases here in the country and Russia is not too happy about it. Here in Tromso we can now have NATO nuclear submarines at our port, and that’s not going down well with our local population.

“So hard security issues may be hovering around the proceedings, maybe even more than two years ago, but I think it’s very unlikely they’ll be official mention of them during the speeches. Russia wants military issues off the table as much as possible and have been clear they don’t see that as appropriate in an Arctic Council forum.”

And although headlines suggest this new round of tensions could put stress on the Arctic Council’s work, Bouffard disagrees.

“The greatest interest for the Arctic states is to filter out these global tensions and focus on the very real challenges facing the Arctic, that maybe not everyone else in the world cares about as much, but that we really feel up here in the North,” he said.

“People either refuse to believe, or can’t wrap their minds around the fact that the Arctic Council exists and thrives only because it excludes hard security related topics from its work. It seems to be a very difficult concept to grasp, or something so unnatural to think about, that an organization like this can do this kind of work without looking at those issues, but that’s what happens.

“People talk about whether the Arctic Council should do security and I’m constantly reminding them: It’s not going to happen. It’s not a thing. First, there’s no interest, and second, the Arctic Council would cease to exist if they got into that world.” 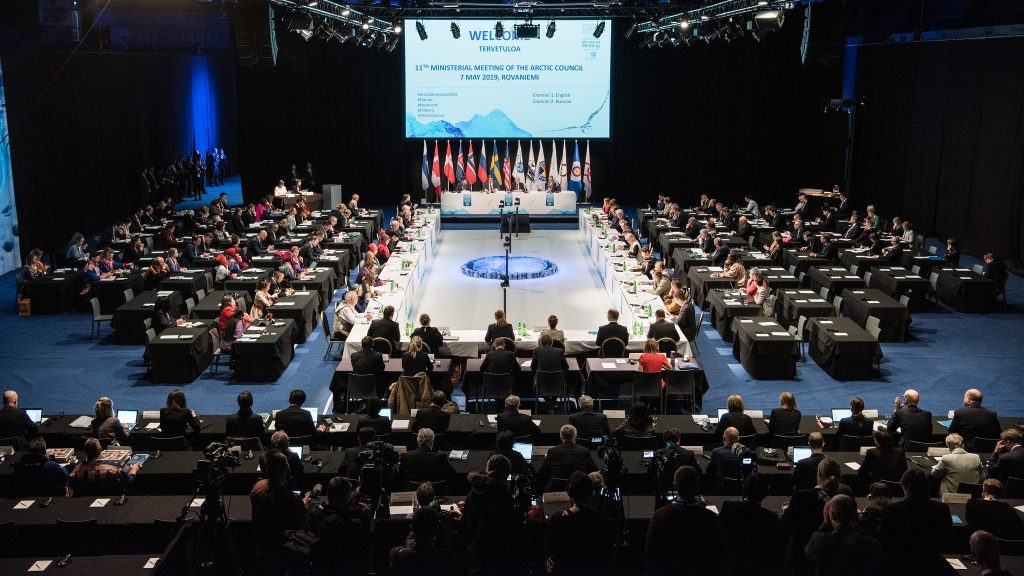 The 11th Arctic Council Ministerial Meeting on May 7 in Rovaniemi, Finland.  (Jouni Porsanger / Ministry for Foreign Affairs of Finland)

Russia has put sustainable development at the top of its Arctic Council chairmanship priorities, and Lanteigne says seeing how the country navigates the issue in the current global economic context will be a key issue to watch over the next two years.

“Russia has been trying to improve the economic situation in Siberia and the Russian Far East but has run into multiple road blocks including falling oil prices, and environmental problems like Norilsk and what happened recently in the Komi Republic,” he said.

“It will be interesting to see how they approach the sustainable development and environment questions and what else they’ll bring to the table.”

The Arctic Council ministerial will start at 8:30am local time in Reykjavik.

Because of the pandemic, this year’s meeting will be a hybrid event.

The foreign ministers and permanent participants are attending in person. Working group participants, observer states and organizations, and other additional delegates will attend virtually.

Canada: From strategic plan to deliverables, Iceland gears up for Arctic Council ministerial, Eye on the Arctic

Iceland: Arctic Council’s work on track despite pandemic, now gearing up for 2021 ministerial, says ambassador & SAO, Eye on the Arctic