New data from a Statistics Canada survey of residents in the three territorial capitals has found an emerging divide in vaccine uptake between Indigenous and non-Indigenous northerners.

A survey conducted between March 15 and April 12 found Indigenous adults in Whitehorse, Yellowknife and Iqaluit were nearly 20 per cent less likely to have received a single dose of the vaccine compared to non-Indigenous residents.

Indigenous adults were also more likely to report hesitancy about getting the vaccine, with one in three expressing a distrust of COVID-19 vaccines “because they were developed too quickly.”

The survey is the first in a series from Statistics Canada to explore attitudes toward COVID-19 vaccines that will eventually cover all of Canada.

During the period of the survey, vaccines were available to all adults over the age of 18 in all three territories.

While the survey found that more than 80 per cent of respondents had received at least one dose, the data shows considerable gaps based on race, education, income and territory.

For example, northerners earning less than $90,000 a year were 10 per cent less likely to have got a first dose of the vaccine.

All of those trends were more pronounced among Indigenous northerners.

Fewer than half of Indigenous residents without a post-secondary degree had gone for their first dose by mid-April. Those earning less than $90,000 were also 25 per cent less likely to get the jab. 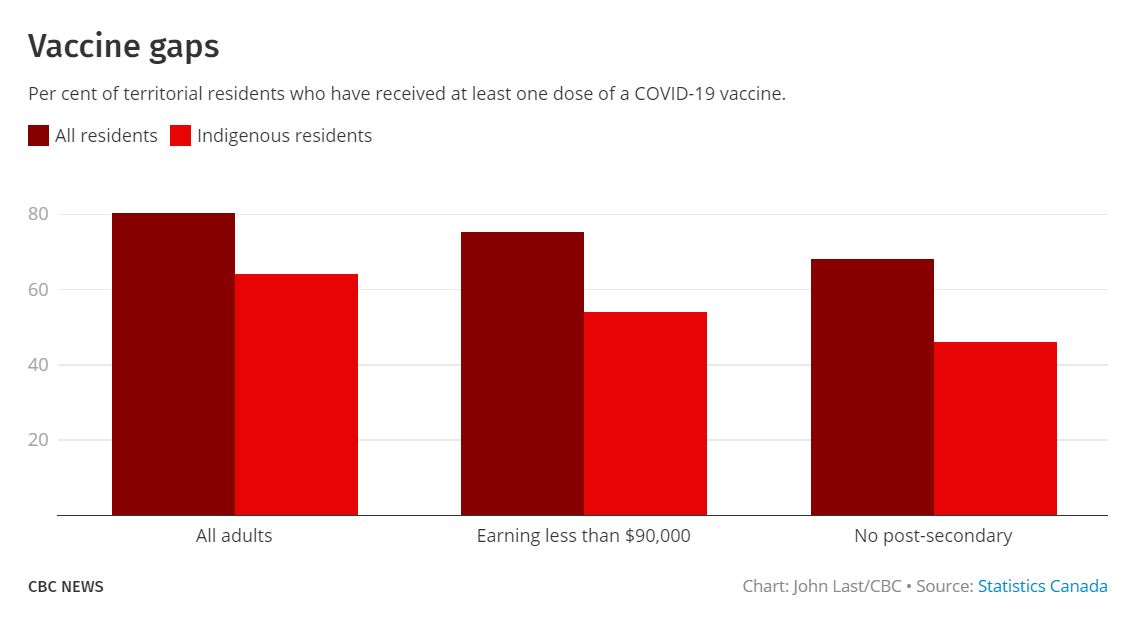 Of the one-in-five respondents who hadn’t yet received a first dose of the vaccine, more than 80 per cent intended to get a jab in the future.

Most of the remainder — more than 67 percent — cited logistical barriers as the main reason why they hadn’t yet been vaccinated.

Only 3.7 per cent of respondents said they didn’t intend to get vaccinated at all. But many more expressed more nuanced reasons for hesitancy in response to the survey.

For example, roughly one in four unvaccinated respondents said they didn’t want to get the vaccine “at this time.”

Nearly one in five residents said they thought the vaccine was developed too quickly, and slightly more said they believed the dangers of the disease had been overstated.

Conversely, more than a quarter thought the vaccine was unnecessary, and that physical distancing, hand washing and wearing masks was enough to prevent COVID-19 from spreading.

Here, too, there are considerable gaps between Indigenous and non-Indigenous northerners.

The survey wasn’t able to reach people outside of the territorial capitals, so these numbers don’t reflect vaccine uptake in small communities. The response rate was also low in Iqaluit, meaning data from Nunavut is less reliable. 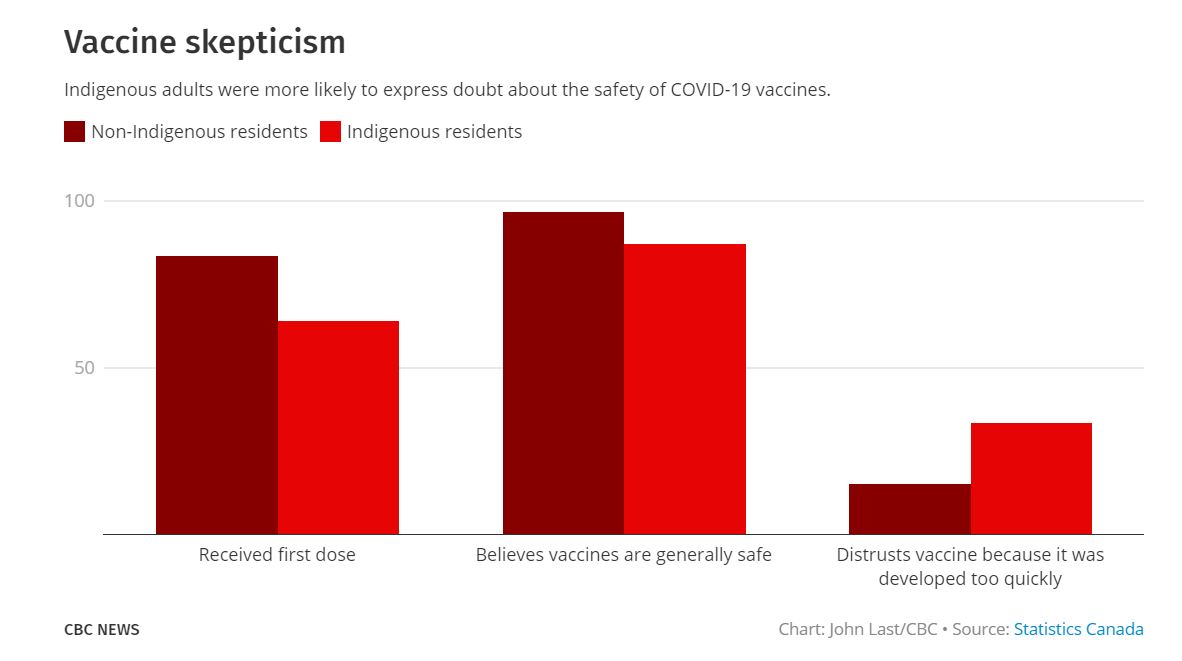 Reach out to hesitant individuals: chief

Chief Ernest Betsina of Ndilo, N.W.T., which neighbours Yellowknife, said low literacy rates in his community may be one reason why public health messaging is not reaching his members.

But others are still hesitant despite hearing about the benefits of the vaccine, he said.

“No matter how much they hear about, say, the good things … about the vaccine … they still refuse to take it,” he said.

Betsina suggested that health officials work with First Nations like his to reach out to individual members who have yet to get the jab.

“See what is the problem — why they haven’t got the vaccine? What are they hesitant about?” he said. “Maybe they just don’t know, and they don’t know who to reach out to. So I think the department needs to reach out to the individuals.”

Betsina says he tells members it’s like the flu shot, that side effects are mild, and that he himself has taken it.

“In fact, I was probably the first one in my community … because I wanted to show my people that it’s safe to take,” he said.

In a written statement to CBC News, a spokesperson for Nunavut’s Department of Health said “every community in Nunavut has had equal opportunity and access to the vaccine.”

The spokesperson said officials are using regular news conferences, announcements on community radio, and an “extensive social media campaign” to get that message out.

“Misinformation surrounding COVID-19 vaccines can drive vaccine hesitancy and negatively affect vaccine uptake, not just in Nunavut, but around the world,” they wrote.