Jonathan Gregory didn’t think too much about the implications when he sent the cheek swab off for analysis.

But then the results came back, confirming for the first time through DNA the identity of remains of one of the members of the 19th-century Franklin Expedition: his great-great-great grandfather, Warrant Officer John Gregory.

“It’s quite an eerie feeling,” Gregory said from his home in South Africa. “He was an engineer on the boat and his DNA was found to match mine.”

The boat was HMS Erebus, which along with HMS Terror carried their British crew on the ill-fated polar mission led by John Franklin into what is now the Canadian Arctic in search of the elusive Northwest Passage.

The reinforced wooden ships that sailed from Greenhithe, England, in 1845 were beset by ice off King William Island in 1846 and deserted two years later, according to a note left by the crew in a cairn. Franklin and all 128 of his men died.

But what really happened on the expedition has been an enduring mystery. The discovery of the Erebus wreck in 2014, and the Terror two years later, in many ways only raised more questions, particularly regarding how the ships ended up where they are. (Erebus lies in the shallow waters of Wilmot and Crampton Bay, about 100 kilometres south of the Terror.) 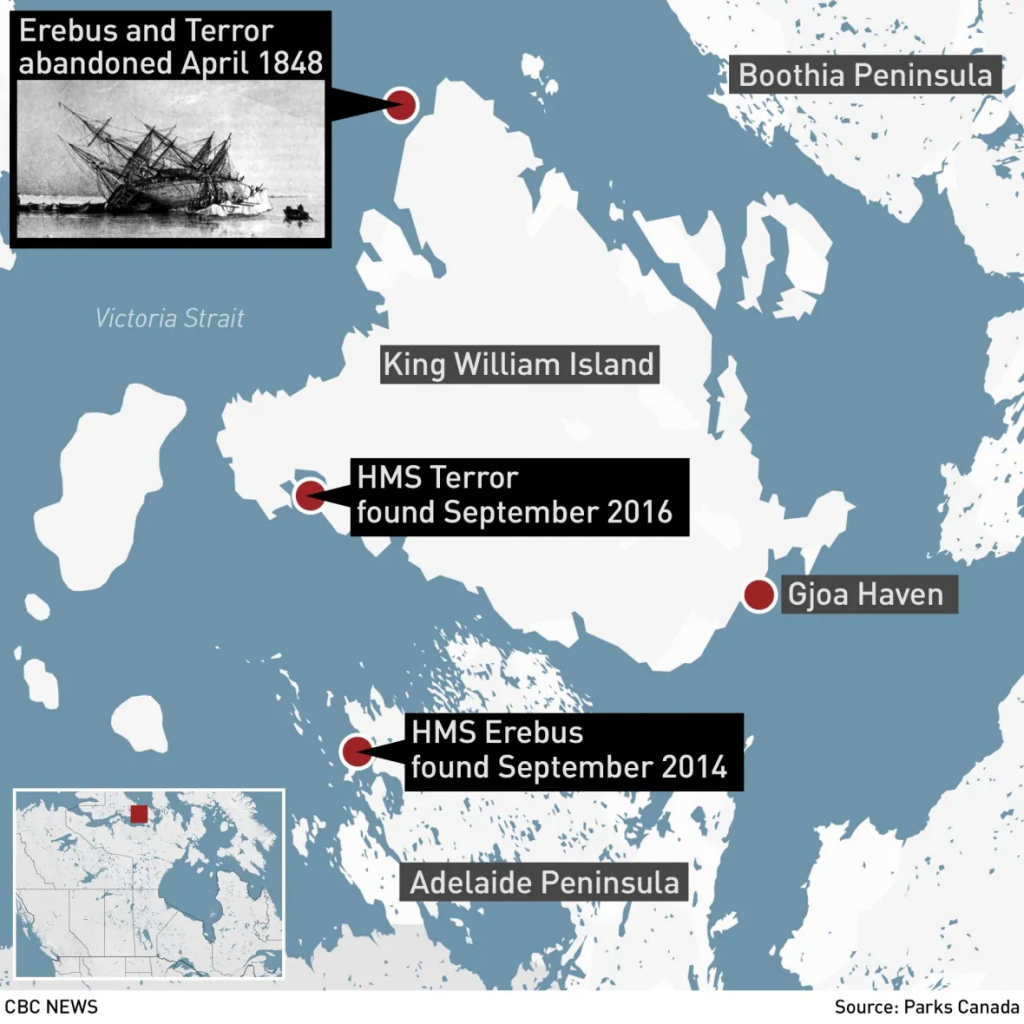 The confirmation of Gregory’s identity is the highest-profile recent development in the ongoing quest to solve the Franklin mystery.

“The Gregory find is huge,” Russell Potter, an English professor at Rhode Island College in Providence, R.I., and author of Finding Franklin, The Untold Story of a 165-Year Search, said in an interview.

“That skull has been pictured over and over. … It was on the cover of Equinox magazine, the famous upside down skull on the rocks that everyone sort of knows.”

It is, he said, rather like “having an old friend be identified finally.”

Along with Gregory’s identification, having more names of crew members might open other opportunities for figuring out what happened on the expedition.

“If we can identify more people, then we can start to correlate certain other things,” said Potter.

“So we start to correlate identity with other details about the remains, that could help us figure out exactly what they mean.”

Jonathan Gregory sent his sample after hearing from a cousin in Canada about a team asking for living descendants of the original expedition crew to provide DNA.

The team of researchers from the University of Waterloo, Lakehead University and Trent University — all in Ontario — confirmed Gregory’s identity by matching Jonathan Gregory’s sample with DNA extracted from tooth and bone samples excavated at Erebus Bay on King William Island in Nunavut in 2013.

“There were a lot more sailors on [Erebus] … but for me what is particularly important is it is a breakthrough in history, where I was the first DNA match and I’m very grateful that I was able to be forthcoming,” Gregory said.

Douglas Stenton, adjunct professor of anthropology at the University of Waterloo and co-author of a new paper about Gregory’s identification, said the researchers were “very excited” by the result.

“We think it’s important to learn as much as we possibly can about these men and identifying them is fundamental to that.”

The quest to crack the Franklin mystery is led by Parks Canada’s underwater archeology team, but their continued efforts in the Arctic have been delayed for a second year, as COVID-19 concerns put off any plans for a return to the Erebus and Terror wreck sites this summer.

No one from the team was available for comment, but those who follow the quest to solve the Franklin mystery from afar take any delay in work in the North in stride.

“The wrecks lay undisturbed for 150 years. They can afford to have another two years off,” author and longtime Franklin sleuth David Woodman said in an interview.

And, he’s quick to point out, the underwater archeologists have lots of other work they can be doing, including further study of more than 350 artifacts that were retrieved when they were at the Erebus site in the summer of 2019.

They have also been sharing via social media and posting online additional information regarding a small number of artifacts, along with a site plan of Erebus and a site sketch of Terror.

Are you an underwater enthusiast? 🤿 Parks Canada underwater archaeologists created this site plan of #HMSErebus using both historical and archaeological data, including multi-beam echosounder and photogrammetry recording. To learn more ➡ https://t.co/TJPzLDF67R pic.twitter.com/ARziovR2n5

Woodman, a retired B.C. Ferries captain living in Port Coquitlam, B.C., and author of Unravelling the Franklin Mystery: Inuit Testimony, published in 1991, was also intrigued by the identification of Gregory.

“He was one of the oldest guys and he was from the Erebus, so when did this happen? Was he one of the early succumbers?” Woodman said. “We know he wasn’t the first to die because other work has been done …. so what was it about John Gregory that he ends up at Erebus Bay?”

Woodman is also fascinated by artifacts that have been recovered so far from the Erebus, including hair that could be used for DNA matching, sealing wax that had its own distinctive markings and a piece of a wooden ruler from a navigational instrument belonging to Frederick Hornby.

“Hornby’s ruler is strange because first of all, Hornby wasn’t on the Erebus. He was from Terror,” said Woodman.

As much as Woodman isn’t “too disturbed” that the underwater archeologists didn’t get to the North this year, he is concerned that momentum be maintained for the project, particularly if the federal election might result in a new government that is “not as enthusiastic about putting the money there or diverts it somewhere else,” he said.

“Keeping the momentum up when you’re doing something as edge-of-the-envelope as this is very important.”

If two or three years are missed, maybe some of the fire goes out from underneath the project.

As much as Parks Canada is focused on Franklin endeavours, so is Stenton, who thrives on the land-based archeological work that he has been doing in the North in connection with the expedition for several years.

While the pandemic delayed his plans to return to the Arctic this summer, he is busy with other research and analysis. Researchers have 16 DNA sequences that can be compared to archeological samples, Stenton said, and plan to test another descendant sample this month.

“The terrestrial record and the marine record are not mutually exclusive,” he said.

“Most of what we know — or think we know is probably the better way to say it — about what happened we know from the terrestrial sites right now.”

And that, he suggests, is why there is so much “anticipation and excitement” about what the wrecks may reveal.

“Are the findings going to answer a lot of these questions?… Maybe they will. Maybe some mysteries will remain. Who knows.”