2021 was one of the seven warmest year’s on record, and included a “record-shattering” temperature in Canada,  the World Meteorological Organization said in a report looking at consolidated data for the year.

“The year 2021 will be remembered for a record-shattering temperature of nearly 50°C in Canada, comparable to the values reported in the hot Saharan Desert of Algeria, exceptional rainfall, and deadly flooding in Asia and Europe as well as drought in parts of Africa and South America,” WMO Secretary-General Petteri Taalas said in a news release on Wednesday.

The data is gathered from monthly information coming from ships and buoys, part of a marine network set up around the world.

‘Each decade warmer than the previous’

“Since the 1980s, each decade has been warmer than the previous one,” the WMO said.  “This is expected to continue.” 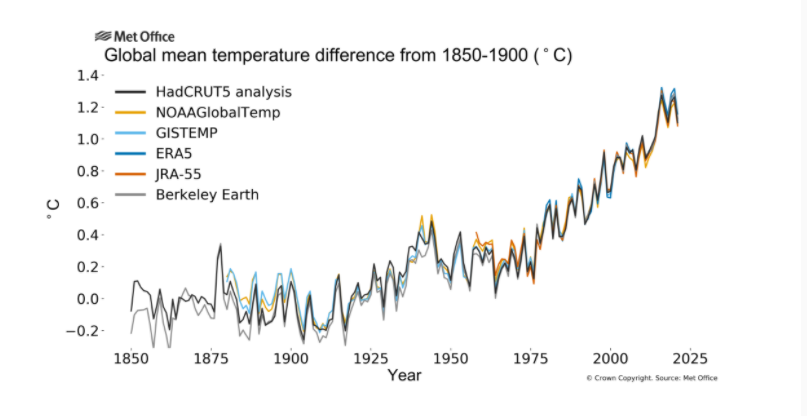 Reanalysis datasets from the European Centre for Medium Range Weather Forecasts and its Copernicus Climate Change Service, and the Japan Meteorological Agency (JMA) are also used.

This data uses marine and meteorological data, along with satellite observations, allowing scientists to estimate temperatures even in remote locations where on the ground data is hard to come by, like in the polar regions.

La Niña, a weather pattern that occurs every few years that cools the climate, occurred in 2020-2022, yet 2021 sill ended up one of the seven warmest years on record, something that should give the international community food for thought, Taalas said.

“Even so, 2021 was still warmer than previous years influenced by La Niña. The overall long-term warming as a result of greenhouse gas increases is now far larger than the year-to-year variability in global average temperatures caused by naturally occurring climate drivers.”

The WMO’s final report on the State of the Climate in 2021 which will be released in April 2022.

Canada: 30–50% of critical northern infrastructure could be at high risk by 2050 due to warming, says study, Eye on the Arctic