Nada Humsi – Tragedy and Comedy in the Refugee Experience 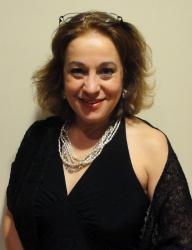 The Multicultural Theater, known as the MT Space, in Kitchener, Ontario, is eleven years old now. Nada Humsi is an artistic associate. Majdi Bou-Mater is the artistic director.

‘Shallal in Toronto’ was one of the company’s productions. It takes a light-hearted approach to the challenges Iraqi refugees faced settling into life in Toronto.  ‘Shallal’ is an Iraqi colloquial name. The play was a great success drawing audiences from all over southern Ontario.

Nada Humsi is comfortable with comedy and tragedy and the refugee experience has been an inspiration for both. The most recent show she wrote is based on the true story of a recent refugee from Iraq, Titled, “I Am Dakhel Faraj” the performance is drawn from conversations Nada had with Faraj Al-Bahrani. He too is a theatre artist, and first heard of the work of Nada Humsi and Majdi Bou-Matar when he was still in Iraq.

Nada Humsi says “back home in Iraq it was much easier to put on a show”.  She is referring to the government support for theater the trio took for granted in Iraq.

This most recent production was challenging in many ways. For Dakhel Faraj, who played himself, rehearsals and performances of his story were gruelling. His children were killed in a round of bombing by the Americans, as he and his wife watched. But like Nada Humsi, he is committed to telling Canadian audiences the story.