Vincent Ngyuen – From Boatperson to Bishop

He was one of the many so-called “boat-people” but at 18, he was probably one of the very few who had piloted the boat to safety.

Vincent Ngyuen arrived in Canada in 1983, having survived the harrowing escape by boat from Vietnam, and a year in a Japanese refugee camp. 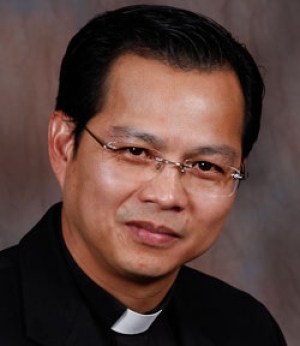 He has shared the story of his preparation; walking the beach, observing the security and the patrols and figuring out the best time to make an escape.

He, and 19 members of his family, crowded into a fishing boat in the middle of the night, hoping to make it out into the open China Sea.  After seven days of rough water and a pirate encounter, the group were rescued by a Japanese freighter.  “We were lucky in a way,” Nguyen told the CBC in 2010, “They didn’t do terrible things that we heard in other stories.”

Following the year in a Japanese refugee camp, Vincent Ngyuen was allowed to come to Canada, where an older brother was sponsoring him.

Vincent quickly learned English and eventually graduated from the University of Toronto in electrical engineering. But by this time he realized theology was his real interest.  In 1993, at the age of 27, he entered a Catholic seminary.  He served as a parish priest in Toronto’s west-end, to both the new Vietnamese community and the old established community in the neighbourhood.

In 2010, he was elevated to the rank of Bishop, the youngest ever, and the first Asian in Canada. He remembers shedding tears as he realized, the family gathering for the ceremony, would be the first reunion of his two sisters and six brothers, in over thirty years.

Bishop Nguyen was appointed as Chancellor of Spiritual Affairs and Moderator of the Curia.