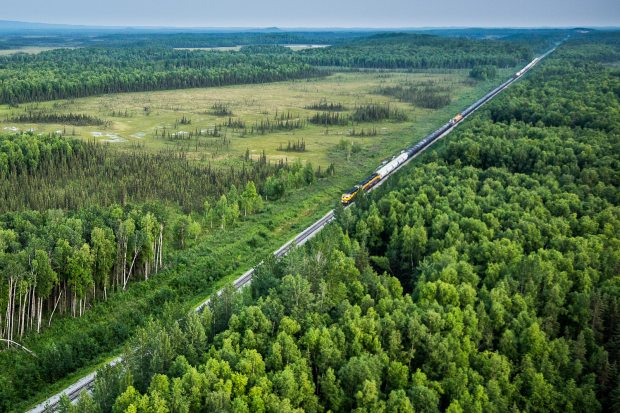 Next month, state agencies seeking to use chemical pesticides on state land will undergo a new application process that no longer includes public comment or review, due to new regulations adopted by the Alaska Department of Environmental Conservation on Feb. 6.

Opponents say years of public opposition to the spraying of pesticides has been circumvented by the new regulations, and claim they pose a danger to public health and safety.

Supporters call the move a way to streamline a process that was overly burdensome.

The new regulations replace the permit application process with the requirement that agencies develop an Integrated Pest Management Plan (IPM) and submit it to the DEC, who will then post the plans on its website 30 days in advance of planned spraying, to give the public adequate notice. Both herbicides, used for killing plants, and pesticides, used for killing animals and insects, are referred to as pesticides in the regulation language.

Bob Blankenburg, environmental manager at the DEC, said the regulation changes were prompted by the « significant » delays caused by the permit process. Approvals could take 8 months or more, during which time unwanted vegetation would run rampant on rights-of-way and other state-owned land.

« You really need to be able to be nimble » in addressing weeds and invasive species, he said. « Multiple agencies expressed concern » over the length of the process.

The DEC also points to discrepancies under the old rules between the permitting process required of state land managers and private landowners, who are able to apply the exact same pesticides, many of which are available over-the-counter, without a permit.

The newly adopted regulations now hinge on the idea that « the label is the law, » Blankenburg explained. The U.S. Environmental Protection Agency evaluates pesticides prior to approving them for use. Some are approved as safe for use around water while others are not. Agencies spraying pesticides or herbicides will need to identify which ones they will be using in their IPM, and will have to follow label regulations to ensure the safety of the public and wildlife.

Applicants « will need to consider the least toxic » pesticide first, Blankenburg said. Agencies will also need to employ a certified pesticide applicator to do the spraying, someone who « knows what they are doing. »

Other notifications will also apply, including notifying public drinking water systems within 200 feet of the spraying area at least 30 days in advance. An application for pesticides sprayed directly into water (for aquatic invasive species) or aerially will still need to apply for a permit.

The crux of the issue for opponents of the changes is the removal of the public comment and review period from the permit process. Public comment has historically caused lengthy delays, or complete rejections, of permit applications.

Pam Miller, executive manager of Alaska Community Action on Toxics, believes it’s no overstatement to call the changes an « assault on democracy. »

Rep. Les Gara, D-Anchorage, called the regulations part of a « troubling trend » of giving away sovereignty « when we should protect citizens. »

« It’s another instance of the governor potentially damaging fishing water, » he said, referring also to proposed legislation that would override a citizens initiative to tighten standards of cruise ship wastewater discharge.

Yet through the years the most sustained example of public opposition to pesticide use by a state agency has been that triggered by the Alaska Railroad’s attempts to use herbicide along railroad tracks.

The Alaska Railroad has been using mostly non-chemical methods of vegetation control since the state took over control of the railroad from the federal government in 1985, due to the rejection of most permit applications by the DEC over many years. The rare acceptance of these permits has been due in part to strong public opposition.

In 2006, the Denali, Kenai Peninsula and Matanuska-Susitna boroughs; the Municipality of Anchorage, the City of Seward, the Native Village of Eklutna; and the citizens advisory board for Matanuska-Susitna Valley state parks all passed resolutions opposing the spraying of pesticides by the Alaska Railroad in their respective districts. These resolutions cited concerns including danger to public water wells, drift of pesticides in windy areas to patches of vegetation or bodies of water where fish and wildlife thrive, and close proximity to residential areas.

The new regulations « pretty much give the Alaska Railroad free rein, » Miller said. It’s « a slap in the face to citizens in Alaska who care about that. »

Tim Sullivan, manager for external affairs at Alaska Railroad, said that the spraying of pesticide on railroad tracks is « strictly a safety issue. » The railroad is held to federal standards of controlling vegetation on the tracks, and faces « pretty hefty fines » if it is unable to meet the requirements.

The railroad has attempted to use various other methods of controlling weeds for decades, he explained, from using steam to physically pulling up the plants up, but such methods have proven insufficient. The new regulations will make the process faster.

Sullivan stressed that « we like to be a good neighbor, » and will take public input into consideration. When asked about spraying pesticides near open water sources, he said the new regulations have « set the standard on where we can be in terms of water, » and that « we’ll be well within those rules. »

Yet are pesticides approved by the EPA for use near water actually safe for salmon streams and other sensitive areas?

The DEC says that « Although perception of risk varies widely between different individuals, determination of actual risk must be based on scientific data. The EPA label review process does a thorough, science-based analysis of risk, and is the best available tool for determining how pesticides can be safely used. »

Blankenburg said the EPA’s review includes impact to animals, and he stressed, « We’re concerned with fish and water, too. » But he acknowledged that the question of pesticide safety in sensitive areas is « tough, » and controversial.

Blankenburg says that this year, the DEC will « be out looking at everything that goes on, » inspecting sites for proper use of pesticides, including looking for any drift from the intended site, and evaluating how the new requirements are working.

The regulations go into effect on March 7.