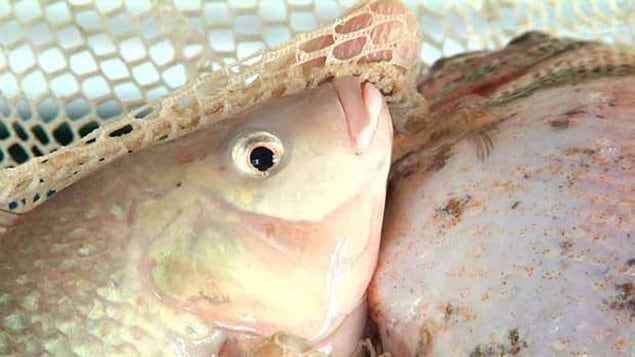 A man from an aquaculture business in the east coast province of New Brunswick is providing help and advice to fish farmers in Ghana.

Jon Steeves, 26, travelled to Sogakope, Ghana this February to set up a fish pond near the Volta River.

People in the west African country already raise Tilapia, a fast growing fish, but that importing feed from Israel and Brazil was making it a barely profitable venture.

Mr. Steeves developed a local feed which reduces feed costs by about 60%.   He took local corn, soybeans and fish meal, bought locally at a fraction of the cost, and also began growing algae and duckweed in the fishpond.

Nicholas Abbah  Abbetto says the new feed seems to be working, and adds that with more profits the operation can expand, and with expansion comes more jobs for local people.

Jon Steeves notes that although the cost of feed was the biggest hurdle, there have been other problems.  Someone stole the pond’s pump, the pond’s wall broke, invasive frogs sometimes eat the fingerlings and power supply is irregular amongst several issues.

Mr. Steeves notes other differences between the Ghana project and the one in New Brunswick. The temperature in Ghana often reached 50 degrees, he would wake up covered in ant and mosquito bites, and one morning he found two venomous brown recluse spiders climbing the wall near his bed.

The Ghana project however, appears to be on track and the tilapia should reach market sized by the fall. Any profits the fish farm makes will then go back into the project.