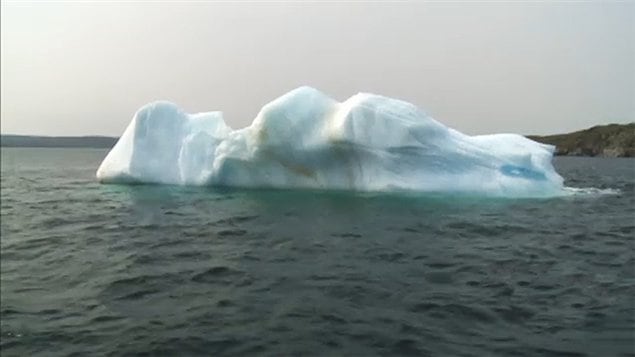 One of an estimated 144 iceburgs in the Atlantic off the northeast coast of Newfoundland
Photo Credit: courtesy of CBC

Tourists from all over the world are making the trip to the northern point of Newfoundland to go out on the water to see the icebergs up close.

“Right from Florida to Germany, Switzerland, from all over the world,” Paul Alcock of Northland Discovery Boat Tours told CBC News.

About a dozen icebergs surround the community of St. Anthony this season, more than anywhere else in the province.

A recent tour ferried visitors from Honduras and Great Britain.  Kayla Holder and Daniel Jones, a couple from England had thought Gros Morne National Park the highlight of their vacation.  But the trip out to the icebergs with entertainment provided by a pod of nearby whales, changed their minds.

From the end of May to the end of September, Paul Alcock has been accommodating tourists, taking people out as many as three times a day, seven days a week for  17 years now.  And over the years he’s seen a lot.  “As pieces break off, they shift, they roll, they take on different shapes,” he said.