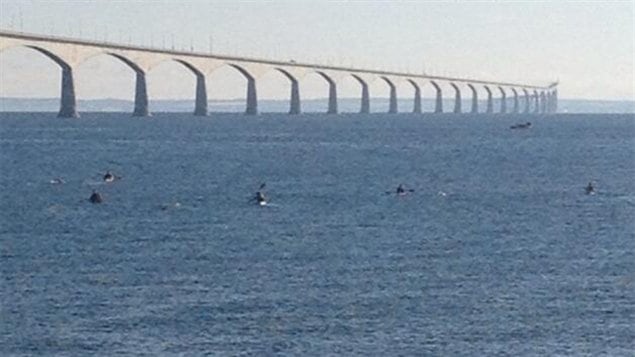 It’s called The Big Swim, and bracing the cold waters of the Northumberland Strait, between the provinces of New Brunswick and Prince Edward Island is not for the faint of heart.

Early Sunday morning the first two, of 34 swimmers, entered the water on a New Brunswick beach, determined to swim the 14 kilometres in the shadow of the Confederation Bridge.

This is the third year for The Big Swim.  It began as an effort to raise money for Cystic Fibrosis Canada and Camp Brigadoon.  The camp is a recreational site in Nova Scotia that provides a vacation for children living with chronic illnesses, or special needs.  It welcomes children from Atlantic Canada.

The 34 swimmers, the largest group ever to take on the challenge, raised over C$136,000 to be split between the two charities.

In an interview with CBC, Suzanne Ferrier, who’d been training for months for the feat, described the experience:  “When you’re swimming for five hours straight and you’re in the water, you don’t really see anything.  Your face is in the water.  It’s a lot of time to spend with yourself, just thinking,” she said.  “I’ll remind myself we’re doing this for the children.  It may be tough for me right now, but they have this every day.”

15-year old Jessica Plummer set a record on Sunday, becoming the youngest female to cross the Northumberland Strait.  She told CBC, the final kilometre-and-a-half, “was probably the hardest thing I’ve ever done.”

Bob Grant, the oldest swimmer in the group, said that completing the swim was the culmination of an estimated 500,000 metres of swim training.

The winds, the waves and the weather all worked to the swimmers advantage this year.  The swimmers were accompanied by supporters in kayaks, and the crossing took about 5 hours.